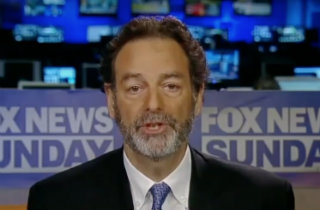 On Sunday afternoon, Joel Benenson, a campaign strategist for Hillary Clinton, dropped by Chris Wallace’s “Fox News Sunday” on the Fox News Channel. During Benenson’s appearance, Wallace’s questions turned to the immunity granted to former Clinton Chief of Staff Cheryl Mills and other aides by the FBI, which led to a somewhat heated discussion. News of Mills’ immunity first broke on Friday thanks to an interview that Rep. Jason Chaffetz, chairman of the House Oversight and Government Reform Committee, gave to the Associated Press.

Skip to 21:33  below for the relevant portion of Benenson’s segment:

“It’s fairly routine when police and law enforcement are investigating a particular issue and you’re sitting down with them to give full cooperation, turn over materials, hand over computers, BlackBerrys, whatever,” Benenson explained to Wallace.  “They narrow their scope of their investigation to the issue at hand.” Essentially, his point was that “limited immunity is anything else [that] is irrelevant to them” after getting the desired information about the case being worked on.

When Wallace pushed Benenson on how it all must have been relevant, or otherwise, “why did Cheryl Mills ask for and receive immunity, limited immunity from criminal prosecution in this case?,” the Clinton strategist didn’t back down. “Because the reason for that, Chris, is to that if you’re handing over a vast amount of materials, something like your computer or your BlackBerry or whatever.  It could be files that they want that are not germane or relevant.  It could be conversations with anybody else, your accountant, somebody.”

In other words? “They wanted to make sure they had access to Cheryl Mills’ information about e-mails.  Not anything else.” Wallace, somewhat surprisingly, showed a bit of humility, saying that “I’ll be honest.  It may be true.  I didn’t — I don’t know that. ”