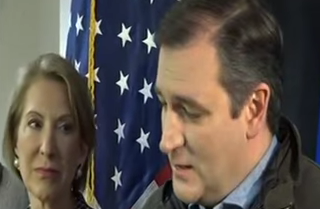 Monday’s Ted Cruz press conference in Wisconsin, in which former Republican presidential hopeful Carly Fiorina leaped in to intercept a reporter’s question about Cruz’s alleged marital infidelity, was pivotal. It marked the first time we have seen an instance of collective deception in what appears to be a desperate effort to keep Cruz sufficiently unsullied to stop Donald Trump.

The question, posed by Daily Mail reporter David Martosko, was straight and to the point: “Can you please swat down more definitively this National Enquirer piece by telling us on the record that you’ve never been unfaithful to your wife?” It was a question that was screaming to be asked, in light of the deceptive nature of Cruz’s response to the National Enquirer story, which we have previously highlighted.

What ensued reminded us of the old adage, “One lies and the other swears to it.” That Fiorina felt compelled to jump in and rescue Cruz from the question was enormously troubling in itself. Why did she feel she couldn’t just let Cruz respond categorically that he had never been unfaithful? But an even more troubling dimension unfolded as Fiorina launched into a harsh attack on Trump, on the media, and, bewilderingly, on President Obama. The attack behavior was clearly aimed at shifting the spotlight away from Cruz, because, we believe Fiorina must have feared, the truth was not Cruz’s ally.

No doubt, alliances constitute the bedrock of politics, and alliances of former political foes, such as Cruz and Fiorina, are run-of-the-mill developments that we’ve come to expect in presidential campaigns. But what is striking about this particular alliance is that we’re now seeing politicians rallying around what we perceive as deception to stop a joint enemy—in this case, Donald Trump.

Fiorina was clearly on a mission. When she jumped in to rescue Cruz, Martosko did his best to cut her off.

“No, I’m sorry, I asked the Senator that question,” he said. “Do you have first-hand knowledge of his marriage?”

Rather than answer the question, Fiorina declared, “I’m going to comment,” and she launched into her multi-pronged attack. (Watch below)

“This is an example of the media playing to Donald Trump’s tune. Donald Trump is a serial philanderer, by his own admission,” she said. “And in a week when we have had a terrorist attack in Brussels; a shooting on Capitol Hill; the President of the United States in the baseball stands with Raul Castro, and insisting that he be photographed in front of a portrait of Che Guevara with the two Castro brothers, we are talking about a scurrilous, ridiculous piece in the National Enquirer? Why do you all dance to Donald Trump’s tune? Let’s talk about the issues, please.”

This response floored us, because it indicated to us that not only that Fiorina likely thinks Cruz has indeed been unfaithful, but that she is willing to provide cover for him—and in doing so, displayed the same behaviors that we have seen from the Senator. In failing to make the denial that we’ve been waiting to hear directly from Cruz, instead choosing to go into attack mode, Fiorina has left us to conclude that the greater good in her mind is to do whatever it takes to prevent Trump from winning, and she sees her defense of Cruz as furthering that aim. She appears to consider that approach as one worth taking.

That a politician would have no qualms about engaging in what seems to us to be deception by going on the attack to avoid answering a question is certainly nothing new. After all, in case anyone should think we’re singling out an anti-Trump alliance in this respect, we have previously written about how Trump himself is a master at that particular craft. The interesting twist here is that now we have a politician engaging in what we perceive as deception on behalf of another politician—a politician who is a former foe, no less.

That begs an obvious question: Why does Cruz need anyone, let alone a former adversary, to come to his rescue? The answer may lie in Cruz’s own deceptive behavior in response to Martosko’s persistence following Fiorina’s scathing attack.

“Well that’s fine, too,” Martosko said. “But Senator, I’m sorry, this is a very serious question about your character. Will you just, if the answer is, ‘Yes, I’ve always been faithful to my wife,’ just say so, please?”

If the truth had been Cruz’s ally, it would have been so easy for him to respond at that point, “Yes, I have always been faithful to my wife.” Yet he failed to do that. Instead, he attacked his questioner and repeated his seemingly scripted attack on Trump as the villain behind the National Enquirer story.

“Sir, I recognize that you love going into the gutter,” he said.  “I’m going to give a very brief answer to your question, which is the National Enquirer story is complete garbage, it is total lies, it was planted by Donald Trump’s henchmen, and I don’t think the people of Wisconsin, or the people of America, have any interest in tabloid trash. I’m going to focus on the issues that matter for the American people.”

It strikes us that in case after case of allegations of problematic behavior, politicians and others in the public eye fail to take heed of the lesson learned by those who came before them—that the general public is almost invariably forgiving when an individual simply tells the truth. The fact that Trump has not suffered at all from having been, in Fiorina’s words, “a serial philanderer, by his own admission,” is a case in point. What’s much less readily forgiven is lying about the problematic behavior, or trying to cover it up.

If Cruz is being untruthful on the issue of marital infidelity, it’s not difficult to understand what might have driven his decision to go that route, given that his base of support is comprised largely of evangelical Christians. But in so many cases, when we see deception carried out to this extreme—relentless, almost vicious attacks, accompanied by staunchly positioning oneself as a champion of more important matters—the actual problematic behavior is even more egregious than anything that was ever alleged. What we characterize as the collective deception of Fiorina and Cruz is beginning to raise that specter.

That said, no one should construe the conclusions we’ve drawn here as an argument in favor of Donald Trump or any other presidential candidate. Indeed, we have observed and documented plenty of deceptive behavior not only on the part of Trump, as we previously mentioned, but on the parts of the Democratic candidates, as well. We have no interest in taking sides. If we are advocates for anyone in this discussion, it’s the American electorate, which we don’t want to see swayed by deception.

And therein lies the most troubling dimension of all. The American public has come not only to expect, but to accept deception as the norm among politicians, including those vying to become the President of the United States. More of us need to be unwilling to acquiesce to that sad commentary. It’s time to challenge that expectation, and refute that acceptance.