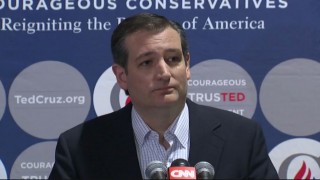 The eyebrow-raising story that appeared earlier this week in the National Enquirer, citing claims that Sen. Ted Cruz had engaged in five extramarital affairs, drew a sharp response from the Republican presidential contender. Sharp as it was, however, it was strikingly weak in terms of denial, and strong in terms of attack. And that combination is a telltale sign of deception that leads us to conclude that this is a matter that warrants further investigation.

The statement that Cruz released on his Facebook page on Friday immediately drew our attention:

“I want to be crystal clear: these attacks are garbage. For Donald J. Trump to enlist his friends at the National Enquirer and his political henchmen to do his bidding shows you that there is no low Donald won’t go. These smears are completely false, they’re offensive to Heidi and me, they’re offensive to our daughters, and they’re offensive to everyone Donald continues to personally attack. Donald Trump’s consistently disgraceful behavior is beneath the office we are seeking and we are not going to follow.”

Subsequently speaking about the matter, Cruz echoed that sentiment, with even more intensity (you can watch below). He said:

“The National Enquirer published a story. It is a story that quoted one source on the record: Roger Stone, Donald Trump’s chief political advisor. Let me be clear, this National Enquirer story is garbage. It is complete and utter lies. It is a tabloid smear, and it is a smear that has come from Donald Trump and his henchmen. It is attacking my family, and what is striking is Donald’s henchman, Roger Stone, had for months been foreshadowing that this attack was coming. It’s not surprising that Donald Trump’s tweet occurs the day before the attack comes out. And I would note that Mr. Stone is a man who has 50 years of dirty tricks behind him. He’s a man for whom a term was coined for copulating with a rodent. Well let me be clear: Donald Trump may be a rat, but I have no desire to copulate with him. And this garbage does not belong in politics. The National Enquirer has endorsed Donald Trump, has said he must be President. And so Donald, when he’s losing, when he’s scared, when Republicans are uniting against him, decides to peddle sleaze and slime. You know, Donald is fond of giving people nicknames. With this pattern, he should not be surprised to see people calling him, ‘Sleazy Donald.’”

We should note that these two statements constitute the only material that we currently have at our disposal to analyze, which is far from ideal. Obviously, the more material available for analysis, the greater our confidence in our findings. With that said, however, we were struck by the volume of deceptive behavior that we identified in these statements.

Behaviorally, when the facts are the ally of an individual, he or she almost always tends to focus on the facts of the matter at hand. In this case, if the key fact was that he had not had these affairs, Cruz would almost certainly have been much more strongly focused on the denial. That is, he very likely would have made a point of explicitly stating something along the lines of, “I did not have these affairs.”

Yet at no point in either statement did Cruz say that. He implied it by saying the allegations are false, and that they’re lies, but behaviorally, such statements are not equivalent to saying he never had the affairs. Even if we were to overlook that fact and consider his statements to be a denial, there is an overwhelmingly higher proportion of attack behavior compared to the effort expended at denial. This type of lopsided attack-to-denial ratio is very consistent with what we have historically seen with deceptive people when allegations are levied against them.

Given the lack of additional information upon which to conduct a more comprehensive behavioral analysis, this is nothing more than our initial opinion and assessment, and we will continue to follow this matter very closely. At the same time, we cannot help but conclude at this point that it’s not looking good for Sen. Cruz.