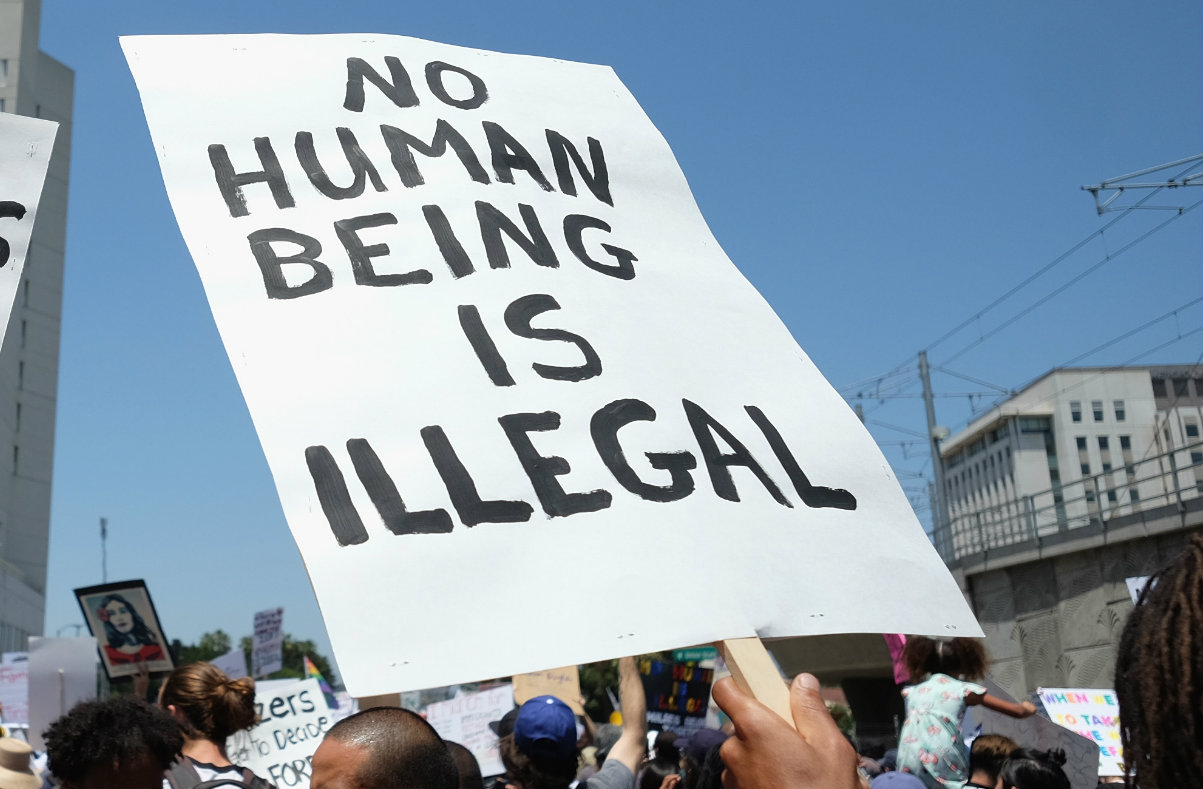 On July 5, President Donald Trump tweeted that undocumented or illegal immigrants should be immediately forced to leave the United States without any court review. “When people, with or without children, enter our Country, they must be told to leave without our… country being forced to endure a long and costly trial. Tell the people ‘OUT,’ and they must leave, just as they would if they were standing on your front lawn. Hiring thousands of ‘judges’ does not work and is not acceptable.” So, are undocumented immigrants entitled to their day in court?

Several U.S. Supreme Court cases have given undocumented immigrants the same rights as Americans in situations where laws or the constitution refer to “persons” or “people.” However, “citizens” enjoy additional rights, such as working, voting in national and state elections and, in some states, drivers’ licenses. And under U.S. law, those who have valid grounds for asylum are entitled to a hearing.

The 14th Amendment of the U.S. Constitution, ratified in 1868 after the end of the Civil War, specifically states, “Nor shall any state deprive any person of life, liberty or property without due process of law; nor deny to any person within its jurisdiction the equal protection of the laws.”

Generally, citizens receive rights such as the right to vote and work and additional privileges granted by state and national laws. Citing the constitution, courts have typically bestowed rights to noncitizens based on broader concepts related to the dignity of an individual independent of national status.

That point was underscored by the U.S. Supreme Court, beginning with a case in 1886 involving different treatment of laundries owned by Chinese nationals in San Francisco. Then, the court asserted “the guarantees of protection contained in the Fourteenth Amendment to the Constitution extend to all persons within the territorial jurisdiction of the United States, without regard to differences of race, of color or of nationality.”

Nearly 100 years later, the Supreme Court cited this case and a handful of subsequent cases in its landmark 1982 decision, Plyer v. Doe, providing undocumented children the right to a public education. A Texas school district had argued that persons who have entered the U.S. illegally are not “within the jurisdiction” of a state even if they are present within its boundaries and subject to its laws. The high court in Plyer rejected that argument.

“Whatever his status under the immigration laws, an alien is surely a ‘person’ in any ordinary sense of that term. Aliens, even aliens whose presence in this country is unlawful, have long been recognized as ‘persons’ guaranteed due process of law by the Fifth and Fourteenth Amendments,” Justice William Brennan said in the 5-4 Plyer decision.

In 1993, Justice Antonin Scalia wrote in Reno v Flores that the courts have “well established … that the Fifth Amendment entitles aliens to due process of law in deportation proceedings.” Due process is the legal concept requiring that all proceedings be fair and that an individual be given notice of the proceedings and an opportunity to be heard before the government acts to take away one’s life, liberty or property. The Flores case gave rise to a 1997 settlement requiring the government to release children to their parents, a relative or a licensed program within 20 days of apprehension — an arrangement that the Trump administration has so far unsuccessfully sought to modify through the courts.

In 1996, Congress passed a law that allowed for expedited removal of undocumented immigrants without a hearing, which was initially applied to apprehensions at a U.S. port of entry. Expedited removal was later expanded and applied to apprehensions of undocumented immigrants that take place within 100 miles of the border and within 14 days of entering the country. An exemption applies for those who express a fear of persecution or an intention to apply for asylum after passing a screening process — a provision that some say the Trump administration is trying to undercut.

So, except when exemptions exist, undocumented immigrants do have due process and equal protection rights under U.S. law.