Virginia Cop Posts $25,000 Bond After Grand Jury Indicts Him for Shooting, Killing Suspect While On Duty 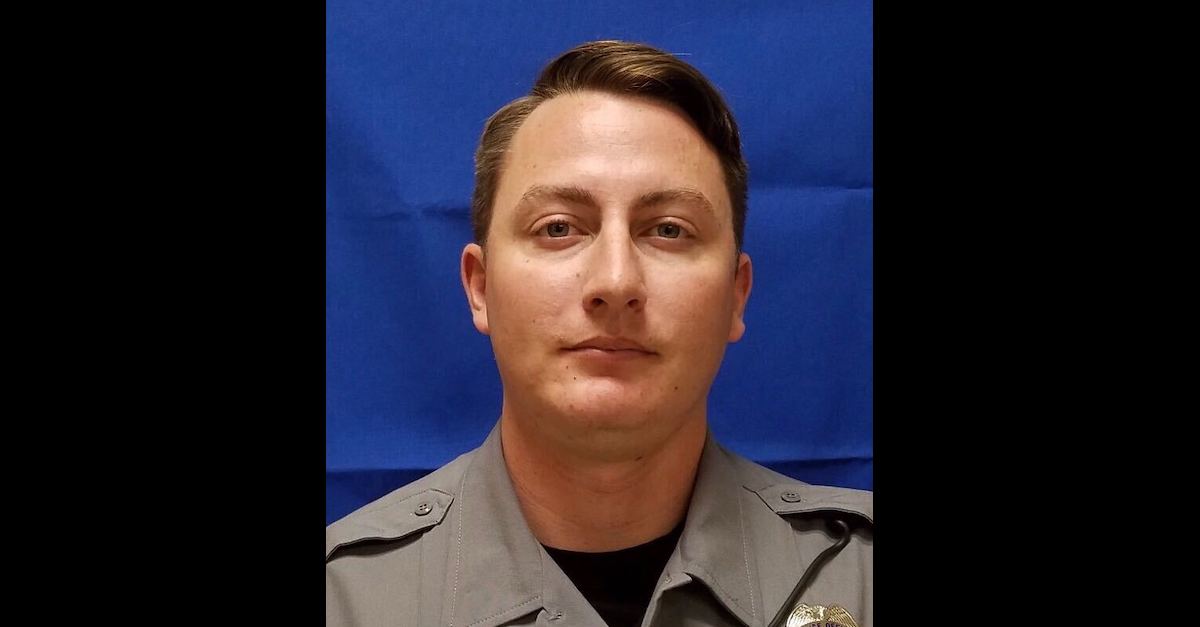 Officer Johnathan Brown is seen in am image provided by the Bristol, Va. Police Dept.

A 31-year-old Virginia police officer is out on bond after being indicted on murder and other charges related to a March 30th on-duty shooting.  In the midst of the ongoing criminal case, the Virginia State Police has changed its story about precisely what happened when now-charged Officer Johnathan Richard Brown pulled the trigger and killed a fleeing suspect. The shooting also came just weeks after a new Virginia police reform law took effect.

Brown, of the Bristol, Va. Police Department, is charged with murder, the use of a firearm during the commission of a murder, and maliciously shooting into an occupied vehicle, according to a report by local NBC affiliate WCYB-TV. CBS affiliate WJHL-TV said Thursday that “Brown’s attorney signed off on a $25,000 bond agreement” and that Brown “immediately bonded out of jail without having to submit a mugshot.” Virginia mugshots are public records — if they’re taken.

The Virginia State Police refused to release body camera video of the shooting pursuant to an open records request filed by the latter television station. They also refused to release other records, including the initial 911 call which summoned police to the scene, the Bristol Herald Courier reported.

State police claim the events unfolded when the Bristol Police Department was called to investigate a report of gunshots at a motel at about 4:30 in the morning on March 30.  Jonathen B. Kohler, 31, of neighboring Bristol, Tenn., refused to get out of the driver’s seat of a 1994 Ford Mustang in the parking lot.

An original state police press release dated March 30 described what authorities originally claimed happened (emphases added): “Kohler refused to exit his vehicle, despite repeated commands by the officers. He then put the Mustang into drive and sped towards one of the officers. The officer fired at the suspect vehicle as it came at him. Kohler died at the scene. No officers were injured during the incident, which remains under investigation at this time.”

A May 5 correction issued by the state police says “officers were verbally engaged with Kohler,” who “backed up and then drove forward in an attempt to exit the parking lot, at which point one of the officers fired at Kohler’s vehicle.”

“Weeks of conducting an extensive criminal investigation into the incident resulted in the updated information,” she said.

Video recorded at the scene by WCVB shows “what appears to be a bullet hole in the driver side window and two holes in the windshield,” the station noted.

Donald Caldwell, a prosecutor from Roanoke, Va., about two and a half hours away, has been called in as a special prosecutor to handle the case against Brown. The officer remains suspended without pay pending an internal affairs investigation.

“We do not condone, nor will we tolerate the unnecessary use of force by our police officers,” said a joint news release by Bristol City Manager and Attorney Randall Eads and Bristol Mayor Bill Hartley. “There is a time and place for the use of force, and force must be used sparingly and within the bounds of the law.”

The shooting is said to be the first time since 1903 that a Bristol police officer was charged in a killing.

A new police use of force law went into effect in Virginia just weeks before the deadly shooting.  It reads:

A law-enforcement officer shall not use deadly force against a person unless:

2. If feasible, the law-enforcement officer has provided a warning to the subject of the deadly force that he will use deadly force;

3. The law-enforcement officer’s actions are reasonable, given the totality of the circumstances; and

4. All other options have been exhausted or do not reasonably lend themselves to the circumstances.

The new law was part of a sweeping police reform bill that passed special session of the Virginia legislature last year.  The special session was one of several which sought to address the protests spurred by the death of George Floyd, Jr., in Minneapolis.  The deadly force law largely codified existing Virginia case law which was already on the books.

A Bristol Police Department use of force policy obtained by WCYB is dated 2014 — well before the new law was passed.  It reads, in relevant part:

An officer may use deadly force only when the officer reasonably believes that the action is:

a. In defense of human life, including the officer’s life, or

b. In defense of any person in immediate danger of serious physical injury, or

c. In the apprehension of a fleeing felon, when:

1. The officer has probable cause to believe that the suspect has committed a felony and poses a significant immediate threat of serious physical injury or death to the officer or to other persons, and

2. The officer has identified himself as a police officer, and given notice of his intention to arrest (time and circumstances permitting), and

3. All other reasonable means of apprehension have been exhausted before deadly force is used.