Trump Wants SNL ‘Looked Into’; If He Does Take Action, NBC Would Be the Ones Laughing 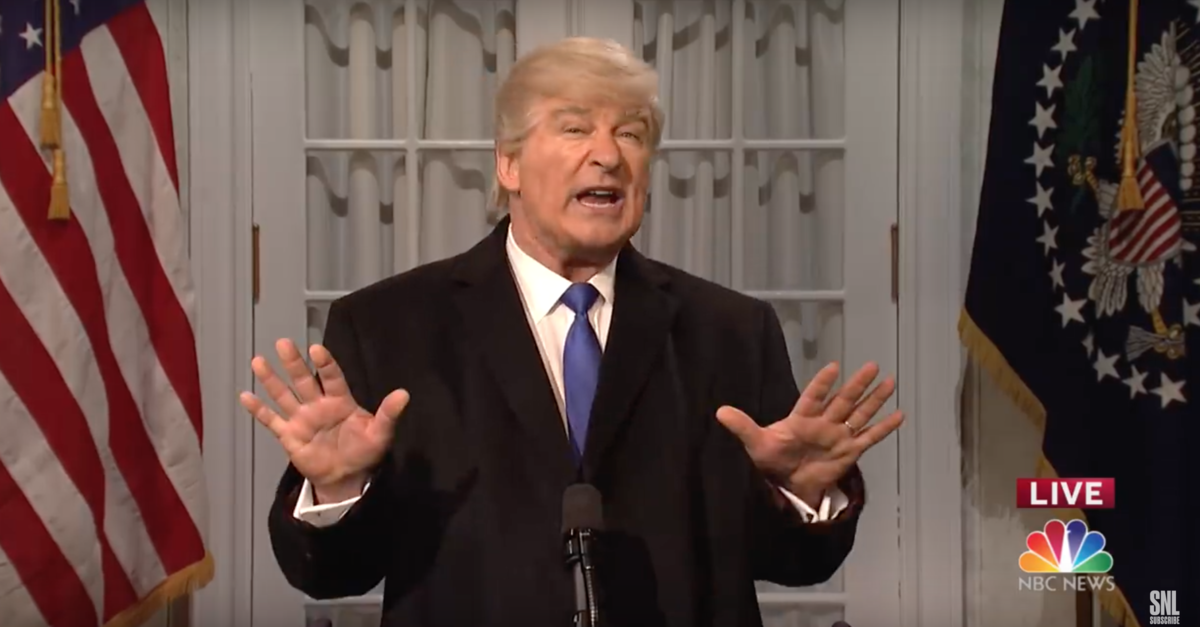 Okay, at this point, I find it hard to believe that our president actually believes that Saturday Night Live is committing some sort of legal wrong for which a corresponding investigation would be a real thing. Still, he’s apparently unable to stop watching, whining, and (of course), tweeting.

In our 2019 Presidents Day edition of The Boy Who Cried Libel, our president continues to appear confused about the difference between sketch comedy programs and news broadcasts, and apparently believes there is some law enforcement agency with jurisdiction over his own hurt feelings. This week, SNL‘s cold open featured Alec Baldwin reprising his portrayal of Trump, this time mocking the president’s controversial declaration of a state of national emergency.

POTUS didn’t get the joke, and followed up with a tweet calling the sketch comedy show “the real collusion,” and demanding “retribution” and some sort of undefined investigation.

Nothing funny about tired Saturday Night Live on Fake News NBC! Question is, how do the Networks get away with these total Republican hit jobs without retribution? Likewise for many other shows? Very unfair and should be looked into. This is the real Collusion!

The context and wording of Trump’s tweet does seem to suggest some official action taken against SNL; although he isn’t clear on what kind of intervention could curtail the show’s ability to “get away with these total Republican hit jobs,” we’re guessing he was referring to criminal or civil law enforcement.

I know we’ve discussed the legal standards for free speech before, but we’re tenacious, so we’ll keep trying.  First, this is America. We don’t criminalize speech here unless that speech is closely related to violence,  so I think we can skip to a civil analysis.

A defamation case – Trump’s preferred threat — would require the president to prove that NBC made a statement of purported fact (as opposed to opinion), that the statement was untrue, and that the falsity caused the Trump to suffer quantifiable harm. Oh, and as Trump is a public figure, he’d also have to prove “actual malice” – that NBC delivered its lies knowing they were false, or with reckless disregard for their truth.

A “test” in court would fail here on literally every front.  Most glaringly, exactly zero parts of a SNL cold open could come close to constituting, “a statement of fact.”  Comedy sketches would rarely be considered to purport fact, and are almost always understood in context as opinion or rhetoric; parodies and satires (so long as they are comedic on their faces), are even more logically distinct from fact. The entire point of any parody is to mimic an existing concept in a manner that is made-up. That’s exactly what the Baldwin press conference did.

Apart from the obvious lack of factual assertions in the SNL skit, the rest of any imagined lawsuit against NBC would be equally absurd. There is no way in hell Trump could ever prove financial damages.  In fact, for a while now, Trump has been accusing SNL of having become irrelevant and suffering from failing ratings.  It’d be kind of difficult for Trump now to claim that SNL is influential enough to cause financial damages to a billionaire president on the basis of a five-minute cold open.

Trump has a long history of not getting the joke. He’s sued comedian Bill Maher for making a birther joke, and the head of Univision for instagramming a doctored picture. These absurd lawsuits never make it very far, but somehow, he never seems particularly deterred. I’m not sure if Trump thinks there’s some sort of presidential hurt-feelings-task force, but this loser of a case would be his alone to handle.

Since we’re talking courtrooms, this might be a good time to point out that if Trump’s battle cries were ever taken seriously, NBC might be a perfect claimant.  You see, many states have legislation called “anti-SLAPP laws.” These are laws that sanction plaintiffs who try and use defamation cases as bully techniques.  When a lawsuit is deemed a “strategic lawsuit against public participation” – one intended to intimidate or silence critics by bringing on the massive burden of costly litigation, the bully-turned-plaintiff gets sanctioned.

Trump shouldn’t be a total stranger to anti-SLAPP statutes, because one in Texas helped quite a bit in his recent case against Stormy Daniels. In that case, Trump played defense after Daniels sued him for defaming her via tweet; Trump defeated that lawsuit on the grounds that the case had been frivolous. Apparently though, the experience taught Trump little about how defamation law works.

Any Trump v. NBC lawsuit would likely be set in New York. New York’s anti-SLAPP statute (which, admittedly, is weaker than the Texas one that was used in the Stormy Daniels case), allows a defamation defendant to recover costs and fees when it proves that a SLAPP had “no substantial basis” in fact or law. Legal action against NBC for its skits is as clear an example of a claim lacking substantial basis in law as could exist.