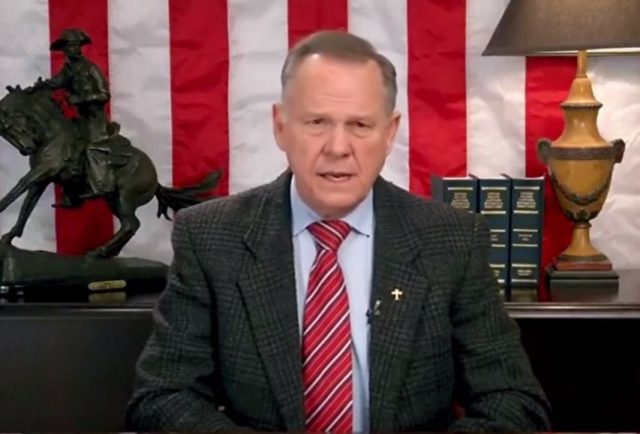 The big story today has been Alabama Republican Roy Moore‘s–now unsuccessful–lawsuit challenging his loss to Doug Jones in the special election for U.S. Senate. What you may not have noticed is his complaint’s reference to the notorious allegations made against him during the campaign that he engaged in sexual activity with underage girls in the past.

As “proof” that Moore’s loss to Jones was unfair, he includes an affidavit that he himself signed, regarding the “false and malicious attacks,” and how he passed a polygraph test that included questions about the accusations brought by Leigh Corfman, Beverly Nelson, and Tina Johnson. Moore claims that the test showed that he didn’t know the women, and never had “any sexual contact” with them.

There are two parts of this affidavit that stand out. One, is that if Moore really wanted to provide objective proof of this polygraph test, he would have gotten an affidavit from the person who administered it. Instead, Moore did his own affidavit, not even saying who the tester was or where the test took place, only saying it was given by “a licensed member of the Alabama Association of Polygraph Examiners.”

The other, and far more interesting part, is that Moore claims that he took the test “Within days of the December 12, 2017 special general election for United States Senate[.]” If Moore is so insistent that these allegations against him are bogus, why would he wait until after the election to take a polygraph? With all of the negative press surrounding him during the tail end of the campaign, taking and passing a lie detector test could have potentially swayed enough voters to give him the win. After all, he only lost by about 20,000 votes.

If you’re wondering why Moore would even address the allegations in a voter fraud lawsuit, you’re not alone. In fact, most of the claims Moore makes in his lawsuit have nothing to do with actual voter fraud.

Much of the reasons Moore gave in support of his complaint had to do with alleged unethical advertising and campaigning by his opponents. He cites a commercial by a pro-Jones group that tried to pressure voters by falsely saying their votes would be public record, and he alleges that sample ballots had been distributed that were pre-marked for Jones. The first of those might constitute some sort of fraud, but certainly not voter fraud. The second is nothing. A sample ballot is not an actual ballot, but an educational tool. Moore may not like that samples marked for Jones went out to voters, but that is a far, far cry from voter fraud.

So what evidence of actual voter fraud did Moore provide? Well, not much. His lawsuit relies heavily on an “”[u]njustifiable, implausible statistical discrepancy” between votes for Moore and straight party line GOP votes in certain precincts. Moore seems to think that there should be some correlation between those who filled out the circle for Republican straight party voting and those who opted to fill out the circle next to Moore’s name, but he doesn’t indicate why. Since Moore’s race was the only one on the ballot, this doesn’t seem relevant at all.

Moore also complains that there was an unusual amount of voters with out-of-state IDs who voted in the election. Of course, this doesn’t necessarily amount to fraud because there could be many college students with out-of-state IDs who registered to vote where their schools are, feeling compelled to vote in this particular election due to the national attention it received. Moore may not agree with the concept of students voting in Alabama instead of their home states, but it’s legal and certainly not fraud.

On top of that, Moore is assuming that the voters with out-of-state IDs voted against him, but there’s no way for him to know this, since votes are conducted through a secret ballot system.

The only serious evidence of possible fraud that Moore raised was a statement a man made in a live television interview soon after the election was over. The man said, “we came here all the way from different parts of the country as part of our fellowship, and all of us pitched in to vote and canvas together, and we got our boy elected.” This drew concern that people were coming in from out of state to vote illegally, but Secretary of State John Merrill opened an investigation of the matter. So far, there has been no reported evidence of any actual fraud. Given that voters had to show identification at the polls and had to have registered by November 27, it seems unlikely that people came from out of state to vote illegally, but to support and campaign for Jones.

Oh, and if all this isn’t enough to make you shake your head, Moore didn’t file his lawsuit until Wednesday night. That’s less than 24 hours before Jones was set to be certified as the winner. Talk about waiting until the last minute.