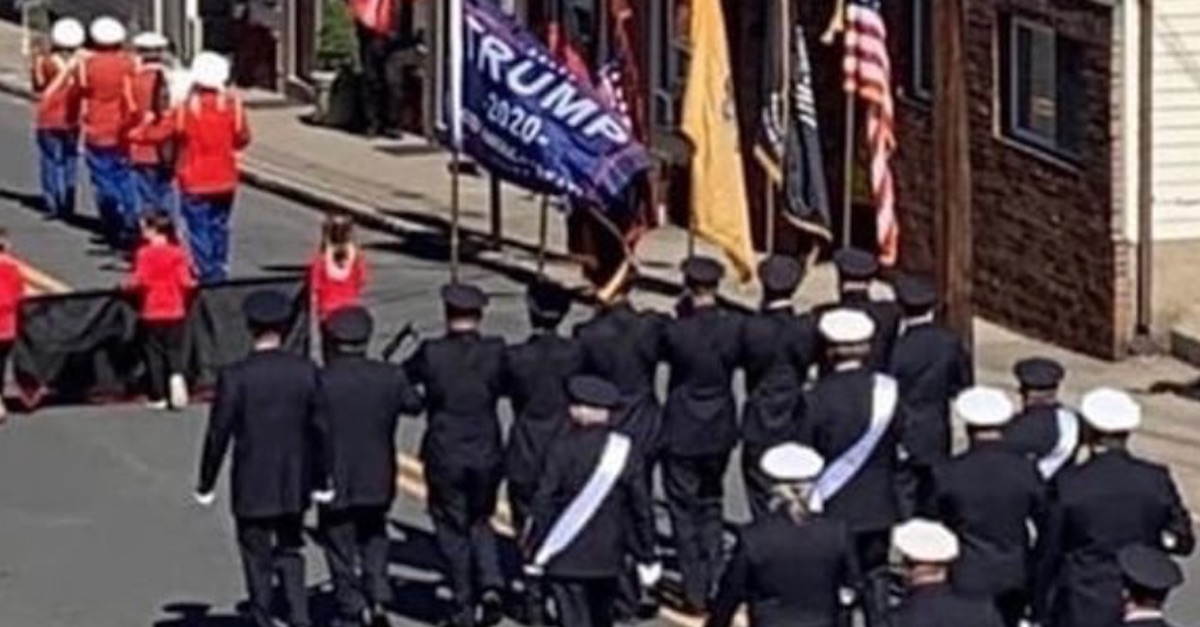 Volunteer firefighters in Franklin, New Jersey were so enthusiastic about their support for President Donald Trump that they were willing to break federal law to prove it. There was a parade at the Sussex County Fireman’s Association Inspection Day; at it, the Franklin Fire Department proudly marched with a “Trump 2020 Keep America Great” flag. They also an American flag and a POW-MIA flag.

That all seems relatively innocuous until you realize that this volunteer fire department is registered as a 501(c)(3) organization. That means, under IRS regulations, that it is explicitly forbidden from participating in any kind of campaigning for elections for public office.

Let’s look at the clear language, shall we?

Under the Internal Revenue Code, all section 501(c)(3) organizations are absolutely prohibited from directly or indirectly participating in, or intervening in, any political campaign on behalf of (or in opposition to) any candidate for elective public office.

Would marching with a MAGA-flag be considered “indirectly participating in” Trump’s presidential campaign? Seems pretty clear that it would. But even if you’re not sure, let’s read on.

Contributions to political campaign funds or public statements of position (verbal or written) made on behalf of the organization in favor of or in opposition to any candidate for public office clearly violate the prohibition against political campaign activity.  Violating this prohibition may result in denial or revocation of tax-exempt status and the imposition of certain excise taxes.

Okay, so who knows if the firefighters made a campaign contribution. But here’s some pretty clear language about what does count as an IRS violation:

On the other hand, voter education or registration activities with evidence of bias that (a) would favor one candidate over another; (b) oppose a candidate in some manner; or (c) have the effect of favoring a candidate or group of candidates, will constitute prohibited participation or intervention.

In other words, if you’re going to be tax-free, you’re going to need to be politically-neutral. It’s not hard. And while the obvious legal violation isn’t, perhaps, the most sinister thing ever done in Trump’s name, reaction from local government is downright appalling.

The Republican mayor of Franklin, Nicholas Giordano, is himself a Trump supporter. His take on the group’s IRS violation:

“Do they have a right as a group to support the president of the United States? Sure they do.”

I guess if you are a Republican mayor in a Trump-loving county, your “rights” are unaffected by trivialities such as federal law.