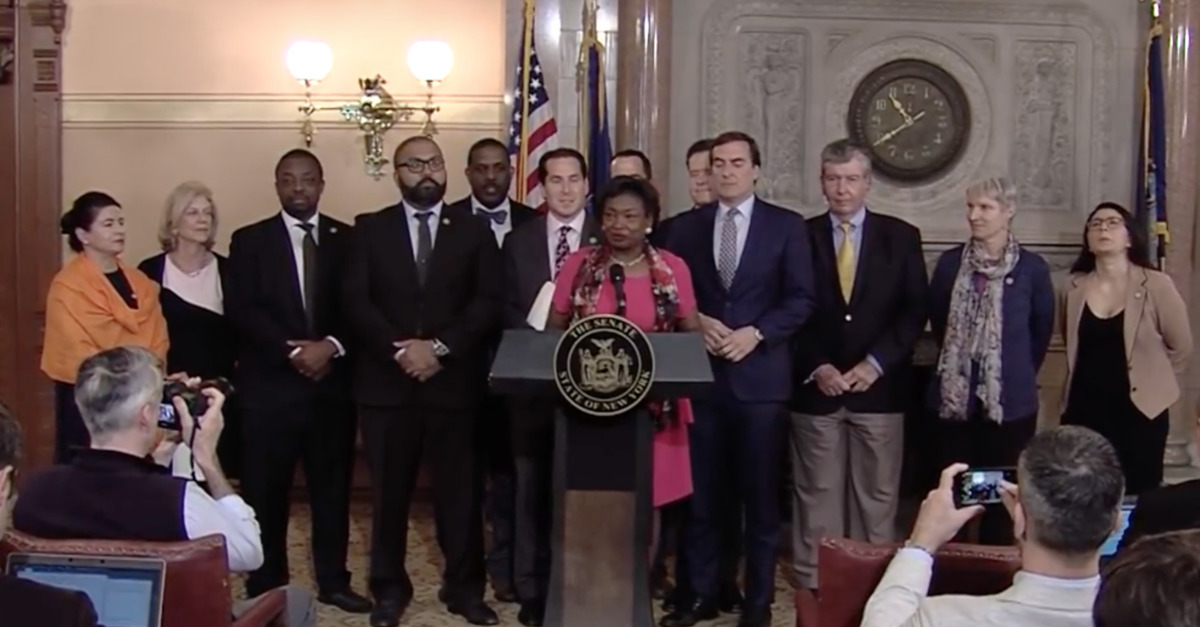 The New York State Senate just made good on its longstanding promises to do all it can to make Donald Trump’s life hell.  On Wednesday, the State Senate approved a bill to close what’s being called the “double jeopardy loophole,” in New York State law.

First, some background on how this all works. New York, (like many other states), currently guarantees its citizens more protections than are strictly required under the U.S. Constitution. One such additional protection is a shield against successive prosecution—commonly called “double jeopardy.” Although federal law would permit a person (Trump, Michael Cohen, Paul Manafort, to name a few) to be prosecuted in state court even if they’ve already been federally prosecuted for the same crime, that kind of thing would usually be a no-go in the Empire State.

[Sidebar: Yes, individual states are allowed to do this because of dual sovereignty and federalism; No, it’s not a particularly good idea generally, because it creates the possibility that an individual will be hounded by both state and federal prosecutors in a manner we’d all consider pretty unfair and un-American. Yes, that’s exactly what has happened in states without the loophole, such as the case of Terance Gamble. Gamble served federal prison time and was then convicted for the same crime by a state. He appealed, and we’re still waiting for SCOTUS to weigh in on this whole thing.]

You’ve got to really love New York. As important as it is to set up a system that would allow Trump and his cohorts to be prosecuted, New York wasn’t willing to sacrifice its entire system of justice to do so. That’s why the bill – S4572—§40.51, bluntly-titled, “Previous Prosecution: Presidential Reprieve, Pardon, or Other Form of Clemency,” only changes the double jeopardy rules for those directly tied to Trump — and doesn’t work retroactively. It won’t affect Paul Manafort, Mike Flynn, or Scooter Libby, but it would affect anyone who faces Trump-related charges in the future.

New York’s bill now heads to the State Assembly, where it’ll be debated and probably face a floor vote in the next few weeks. S4572 is likely to face a friendly reception in the Democratically-controlled State Assembly, and an even friendlier one when it reaches the desk of Governor Andrew Cuomo. Those who oppose the bill, such as State Sen. Andrew Lanza (R-Staten Island), argue that it creates a bad precedent and will surely lead to a total erosion of double jeopardy laws.

At Wednesday’s press conference, New York Senate Majority Leader Andrea Stewart-Cousins thanked her fellow lawmakers for their unabashed efforts to go after Trump. Wednesday brought about not only the proposed change in double-jeopardy law, but also a bill to compel Trump to turn over his state tax returns.

​”This President and his administration have repeatedly shown a true hostility to​ ​ the rule of law and Presidential customs,” said Stewart-Cousins. ”No person is above the law and New Yorkers, as well as all Americans, deserve transparency from their elected officials at every level of government. I commend Senators Hoylman and Kaminsky for their leadership on these important bills.”