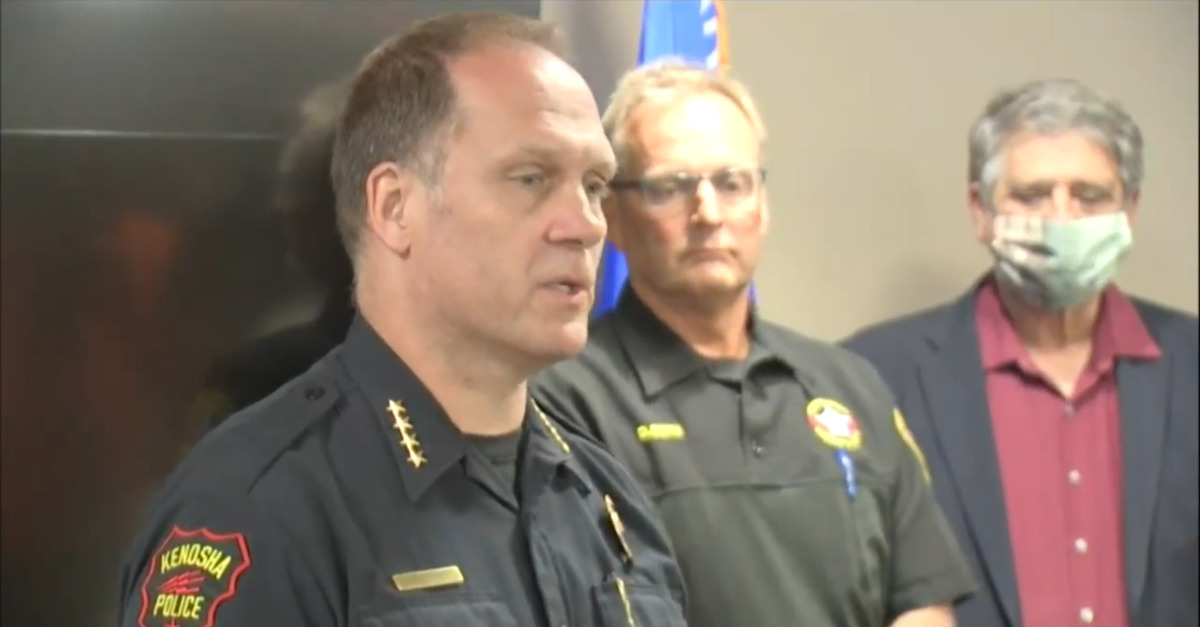 “You have stolen more than we could ever loot,” reads a piece of insurrectionist graffiti tagged onto the side of a building in Madison, Wisconsin in response to criticism of the riots that have erupted across the Badger State following the police shooting of Jacob Blake. On Tuesday night two more lives were stolen by an armed man reportedly affiliated with the “Blue Lives Matter” countermovement who aspired to become a police officer.

Moments before that, local law enforcement thanked the alleged shooter, 17-year-old former police cadet Kyle Rittenhouse, and his so-called “militia” colleagues for being on the scene. One sheriff’s deputy then gave Rittenhouse a bottle of water.

Videos widely-shared on social media verify the police department’s interactions with both the vigilante group and the alleged murderer.

While details are necessarily scarce due to an imposed-and-admitted-to information blackout from Kenosha authorities, criticism of law enforcement’s behavior on the night of the killings has continued apace on social media–despite the apparent lack of interest from most media outlets.

“This is astonishing video,” said President and Executive Director of the Lawyers’ Committee for Civil Rights Under Law Kristen Clarke. “Officers in Kenosha in military vehicles stopped to engage with armed white men, told them they were appreciated and offered them bottles of water.”

Kenosha County Sheriff David Beth justified his deputies’ aiding the militia members and the shooter during a press conference on Wednesday afternoon.

“Our deputies would toss a water to anybody,”Beth said. “If someone came walking past, I don’t care if they’re a protester or who they are, they would pass water. We have cases. People have come to our command posts in this building. We have pallets of water and Gatorade.”

When pressed to explain further, Beth became combative and agitated.

“You’re asking me to tell you what one person did,” he said. “I can’t tell you that.”

Kenosha Police Chief Daniel Miskinis disputed the existence of video footage showing Kenosha law enforcement acting chummy with the armed men. When asked by a different reporter why the militia members were encouraged to be there by local law enforcement, he quickly shut down the line of inquiry.

“I don’t have any information that that existed,” Miskinis said.

The footage does exist, however, and does not appear to support the narrative advanced during the press conference.

“Hey, thank you guys,” one officer tells the militia members in a widely-viewed video. “You need water?”

Rittenhouse can then be seen walking up to obtain the water from the Lenco BearCat armored personnel carrier–apparently the only armed individual to take police up on their offer.

“We appreciate you guys, we really do,” an officer says as Rittenhouse catches the tossed bottle of water, per the video shot by Kristen Harris of TheRundownLive.

Miskinis was later pressed as to whether law enforcement appreciated the militia members’ being there for “back up.”

Officials repeatedly said they were not going to answer most questions about the killings either before, during or after the press conference and took responsibility for the lack of transparency–stressing that the investigation was active and ongoing.

Questions about the incident lingered in the air after being shouted out by multiple reporters.

At one point, Beth gave a lengthy and unsure response to a reporter who asked why Rittenhouse was originally allowed to walk past police officers with his rifle in his hand immediately after the shooting.

The general dearth of information did not go unnoticed.

Charles P. Pierce took stock of the presser for Esquire:

At an afternoon press conference, Kenosha law enforcement officials bizarrely seemed determined to talk about anything except the two murders Tuesday night. Kenosha sheriff David Beth went on and on about closing the area freeways and Kenosha Police Chief Dan Miskinis gingerly tip-toed around the notion of vigilantism. Nobody seriously addressed the question of how an armed teenager allegedly killed two people, and then walked through law-enforcement cordons to go home.

At one point, Beth declined to say whether the presence of the militia exacerbated the tension and violence on the night in question.

“The Kenosha Sheriff is not ready to handle this,” mused CNN legal analyst Elie Honig. “He is visibly confused, doesn’t know his basic facts, and isn’t being clear at all about what he knows and what he will do.”

Other questions have been raised on social media that the brief press conference did not address.

Many have wondered why law enforcement worked diligently to enforce the 8 p.m. curfew against the Black Lives Matter protesters but not against the armed militia members.

In addition to the video showing law enforcement driving past the man holding a long gun identified by folks on the street as the shooter, the Police Chief must answer why the police were chumming it up w/militia members out in violation of curfew. https://t.co/fvKvDokBpP pic.twitter.com/btPpFg8ZWd

There is also a widely-shared video of a militia member–who was apparently part of the same group as Rittenhouse–saying police previously told his paramilitary forces that law enforcement would push the protesters “down by them” so that the militia could “deal with them.”

Law&Crime repeatedly reached out to law enforcement in Kenosha for comment and clarification but no response was forthcoming at the time of publication.