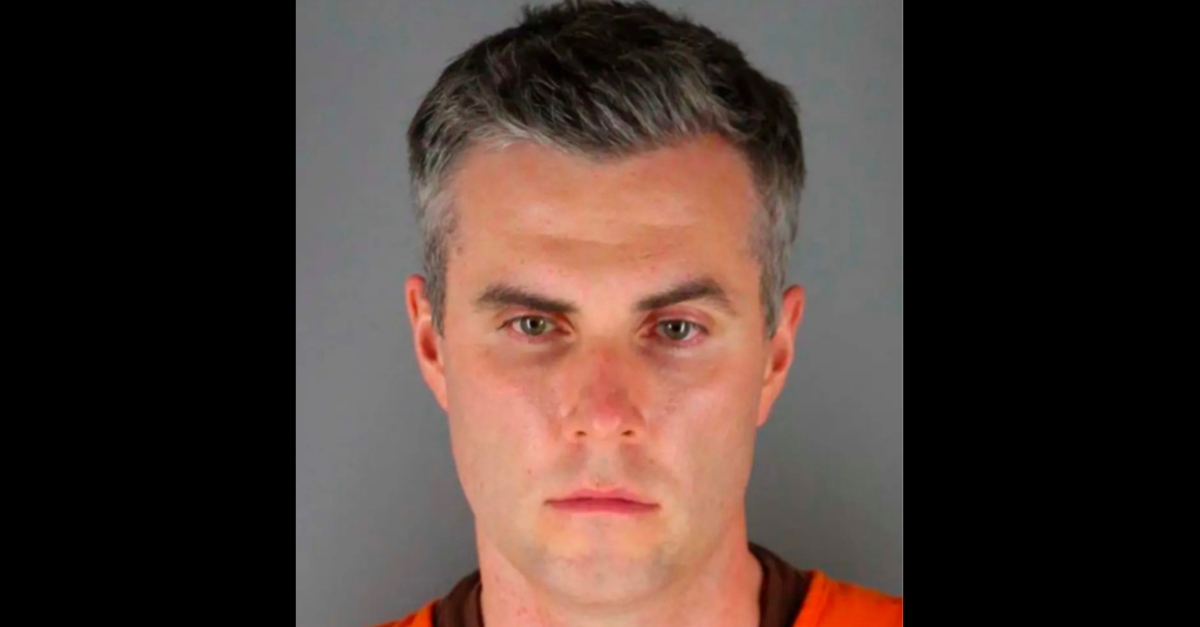 One of the former Minneapolis police officers accused of aiding and abetting the murder of George Floyd in late May now says he didn’t do anything wrong–and then some–claiming it was a fentanyl overdose and an “intentional failure to obey commands” that killed Floyd, not the actions of Derek Chauvin and the three other cops charged in the case.

In a memorandum filed Tuesday, Thomas Lane‘s defense attorney Earl Gray called the prosecution’s version of the story “a narrative fiction” that is both “wrong on the facts” and a “misreading [of] the law.”

“Officer Lane did nothing wrong,” Gray claims in a memo dripping with scorn and derision for the state’s theory and legal arguments–and a great deal of outright contempt for Floyd himself.

Per the audacious filing, at length [emphasis in original]:

We begin with the crimes of Mr. Floyd, his lies to the Police, and the arrest he himself caused. The State would have this Court view him as only “suspected of using a counterfeit $20.00 bill,” someone, given his background, that the Police should have believed in toto when he declared his innocence: “I’m not that kind of guy,” I didn’t do anything wrong man.” When asked by Officer Lane, “What are, are you on something right now?” Mr. Floyd responded, “No, nothing.” He was sober, of course.

The last line was evidently sarcastic.

RELATED: Lawyer for Ex-Cop Charged in George Floyd’s Death Gets Dragged for Saying the Public ‘Didn’t Intercede Either’

Gray went on to disagree with the prosecution’s claim that Floyd’s alleged use of counterfeit money was a non-serious misdemeanor.

“Mr. Floyd’s inquiry as to ‘what he had done wrong,’ was disingenuous,” the memo alleges. “He was the thief.”

Writing that the “probable cause was overwhelming,” Gray repeatedly casts Floyd as responsible for his own death.

“The Officers had an obligation to arrest Mr. Floyd for these felonies, and were authorized to do so,” the memo continues. “All Mr. Floyd had to do was cooperate. But he would not.”

Minnesota Attorney General Keith Ellison (DFL) argued in a recent filing that “Lane and [Alexander] Kueng did not inspect the bill” in question before rushing to arrest Floyd. Gray dismisses that line of thought by saying that Ellison made this argument “without providing authority that they had to [inspect the allegedly counterfeit bill].”

The memo then took an abrupt turn to the overdose theory, citing various defense exhibits to make the officer’s case.

“Mr. Floyd refused Officer Lane’s command to keep his hand up,” Gray tells the court in the motion. “Look closely at Mr. Floyd’s mouth; there is a white spot on the left side of his tongue, Mr. Floyd rather than comply with Officer Lane’s reasonable instructions, turns his head away the white spot is gone.”

The defense reprised this argument near the end of the motion.

“All he had to do is sit in the police car, like every other defendant who is initially arrested,” Gray continues. “While attempting to avoid his arrest, all by himself, Mr. Floyd overdosed on Fentanyl. Given his intoxication level, breathing would have been difficult at best. Mr. Floyd’s intentional failure to obey commands, coupled with his overdosing, contributed to his own death.”

The memo, which was filed in response to the state’s response to Lane’s previously filed motion to dismiss, went on to note that the Hennepin County Medical Examiner’s Office autopsy report concluded that Floyd had 11ng/mL of fentanyl in his system.

Gray also argued that the knee restraint used by Chauvin against Floyd was not excessive because Minneapolis Police Department (MPD) training videos suggest using a knee restraint during some arrests–and that by dint of the MPD advertising such a restraint, Lane had no reason to challenge Chauvin’s use of the technique.

Mr. Floyd claimed “I can’t breathe” at least six times in the back seat of the squad. Mr. Floyd was lying about that too. The State cannot dispute that Mr. Floyd should have been arrested. Once arrested, and his record run, he well knew jail would be his destination, a part of his ongoing cycle of chemical dysfunction, violence, theft, he was an addict, a distributor of drugs, and evident danger to the community. That a ex-con and violent defendant ought to be able to avoid getting into a squad car by declaring claustrophobia, is found nowhere in the case law, or for that matter common sense.

“Regardless of his past, nothing justifies the way he died,” Floyd’s aunt Angela Harrelson told the Star Tribune. “I just feel that to go after someone’s character to justify his death — I’m not pleased with that. I’m not saying that he was a perfect person. He made mistakes. And he had a disease that he was working hard to fight against and it’s a tough disease to fight.”

There was also a jarring argument about the composition of the neighborhood in which Floyd was killed as well.

“The State’s Panglossian trope that the Officers should then have relied on the observations of the witnesses on the scene, is without authority, indeed naive,” Gray argued–referring to the majority people of color neighborhood where Floyd was killed. “Walk down Lake Street to see what an unrestrained crowd can do.”

Read the entire filing below: