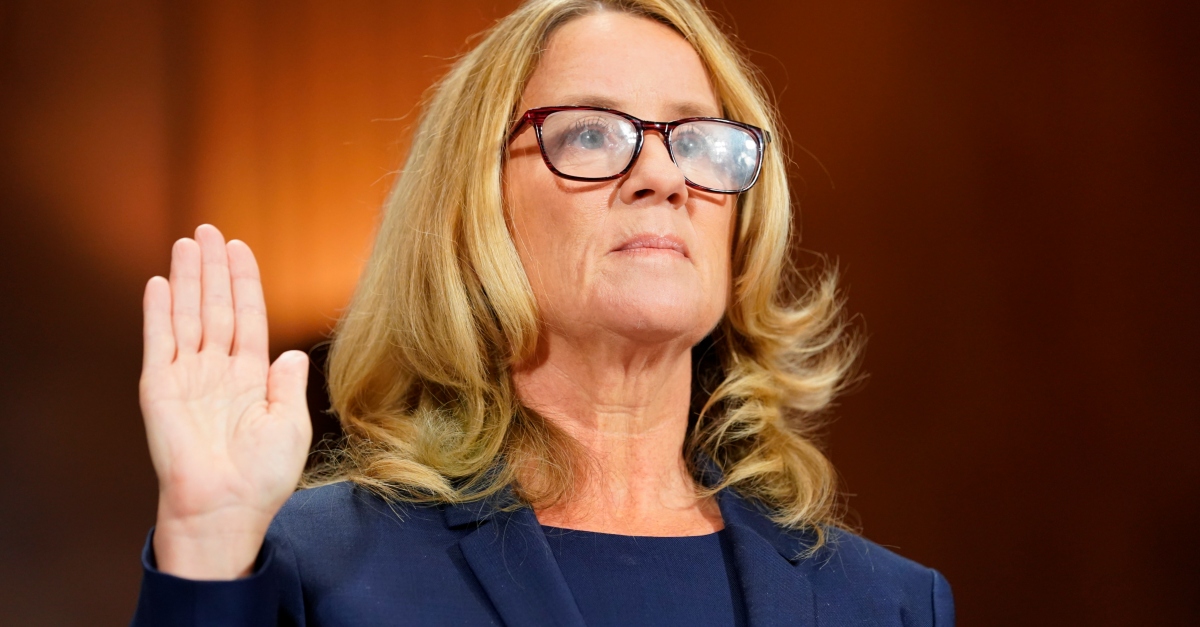 The dust has begun to settle after the Brett Kavanaugh confirmation battle. Still, the party line is clear: Christine Blasey Ford and. before her, Anita Hill both lied. Period.

Yes, both of them perjured themselves before the Senate Judiciary Committee separately, twenty seven years apart. After all, there was “no corroboration” for their accounts. No one was present when Ford was attacked who was willing to support what she said Brett Kavanaugh did to her. And no one was present when Clarence Thomas allegedly uttered the horrendous words Anita Hill complained of in her testimony. No corroboration – so . . . both of them lied!

Imagine this. Your thirteen year old daughter comes home from school and tells you that her teacher groped her in the coat closet after school was dismissed for the day. No one was there; no one saw anything. Of course there was no one there – he’s not stupid. Do you care? You’re a parent – you run to the school and get right in the teacher’s face. His response: “I’m sorry Mrs. Jones. Your daughter’s a teenager with a healthy imagination. Were there any witnesses? Of course not. I assure you, nothing happened.” So, following the logic of Ford and Hill, it didn’t happen – no corroboration; your daughter is a liar.

Can this be the way it works? Many will tell you “no.” An investigation will be done, the teacher may be placed in a non-teaching role, and maybe (but only maybe) your daughter’s claims will be vindicated. At least that’s how it’s been the last number of years.

But now, with the debacle that was the Kavanaugh hearing, will the sands shift? For everyone who says “believe the women,” we have a Senate, including Republican Senator Susan Collins–purportedly a feminist–who literally said that Kavanaugh didn’t attack young Miss Blasey. What does this mean for the rest of us?

First, Senator Collins was wrong to say that Dr. Ford’s claims lacked any corroboration. Indeed, there were numerous pieces of corroboration – even corroboration that would be admissible under the far stricter rules of a criminal trial, which this high-level “job interview” notably was not. In a courtroom, when a party suggests that a witness’s testimony is fabricated – a “recent fabrication” in the jargon of the profession – as Kavanaugh supporters complained regarding Dr. Ford’s identification of Kavanaugh as her attacker, the party proffering that witness may offer statements that witness made before the motive to fabricate arose. In other words, evidence showing that years ago Dr. Ford identified Kavanaugh as her attacker, long before he was nominated to the Supreme Court, would have been admitted in a criminal proceeding. This would include testimony by Dr. Ford’s husband and potentially her therapist, as well as testimony by others to whom Dr. Ford provided information accusing Kavanaugh.

Thus, when Collins said there was no corroboration, what she really meant was that none of the few witnesses the FBI was allowed to interview in their very limited supplemental investigation corroborated Dr. Ford’s testimony. And she also meant — albeit without saying so — that she was enthusiastically willing to ignore the substantial corroboration supplied by witnesses not interviewed, but who were available, including the information offered by many friends and classmates of Brett Kavanaugh who contacted the FBI to say that Kavanaugh misled the Committee about whether he drank alcohol excessively and whether he was aggressive while drinking.

How did the Kavanaugh supporters get there? Backed into a corner by the devastatingly credible testimony of Dr. Ford, Republicans were left to argue the preposterous: that Dr. Ford in fact may have been assaulted, but not by Kavanaugh. In other words, they, like the majority of the nation, actually believed her. But unlike most Americans, they stopped believing her at the critical point where she identified her attacker. You know — the attacker who was known to her because she socialized with him; the attacker she identified to her husband and therapist as Kavanaugh; the attacker she identified with 100% certainty when she testified; and the attacker whose identification, in fact, was supported by corroboration, even though the Committee’s Republicans refused to hear it so they could pretend otherwise.

We would like to see the hypothetical teacher from the coat closet try that argument. If he doesn’t have the school board locked down with supporters willing to ignore the facts to keep him on the teaching staff, we don’t like his chances.

But here’s the real thing. Forty years ago, in New York and many other jurisdictions, as a legal matter a prosecutor simply could not indict a rape case without corroboration. The theory was that since rape cases were so “personal” and women would be more likely to accuse
someone of rape in retaliation for one thing or another — in the courts’ phraseology, “a special peril of unreliability” — the law required corroboration even if the victim was totally credible. These jurisdictions, including New York, finally arrived in the twentieth century in its last quarter. But even when the corroboration rule existed, no one had the gall to say that a lack of corroboration meant that the thing simply didn’t happen – that the accused was flatly innocent.

But not now. Now, if one were to abide the pro-Kavanaugh politician’s view, “no corroboration” means “she’s a liar.” So to all the women (or men) who may one day be attacked, and to all those who may find themselves harassed at the hands of an employer – even if you have lived an exemplary life of honesty and scrupulous morality, remember to wear a camera to record every interaction you have, because absent corroboration you may well be deemed a liar.

Is that what we’ve become?

Joel Cohen is a former prosecutor, and practices criminal defense law at Stroock & Stroock & Lavan LLP in New York. He is the author of “Blindfolds Off: Judges On How They Decide” (ABA Publishing 2014). Jennifer Rodgers is a Lecturer-in-Law at Columbia Law School and a CNN Legal Analyst.  From 2000-13 she was an Assistant United States Attorney in the Southern District of New York.