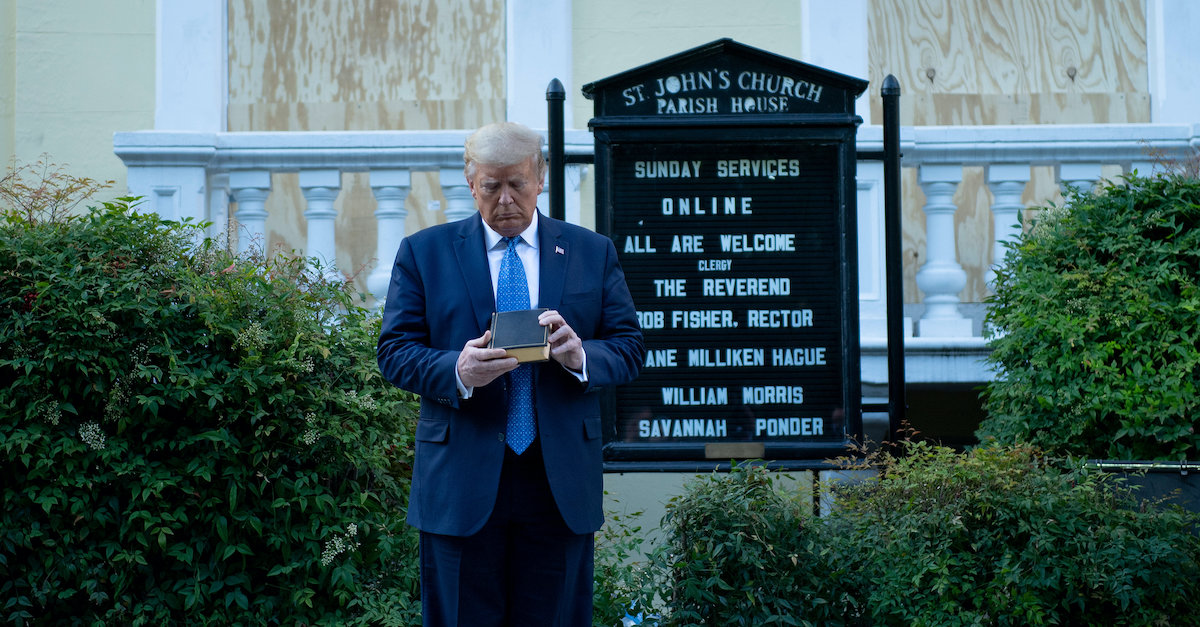 Sen. Ben Sasse (R-Nebraska) has issued a statement which said that President Donald Trump used the “Word of God” as a “political prop” on Monday outside of St. John’s Church across from the White House.

After a speech at the Rose Garden during which President Trump threatened to invoke the Insurrection Act of 1807 to quell uprisings, military police and mounted police were mobilized in Washington, D.C. and used tear gas to clear out protestors who had gathered en masse outside of the White House in Lafayette Square. They were there to protest the killing of George Floyd by Minneapolis cops. After the Rose Garden speech, the president and his entourage walked toward St. John’s Church. Police said that rioters intentionally set a fire in the basement of the historic church on Sunday.

Video of the president’s photo op with the Bible is below:

NEW VIDEO: Peaceful protestors were forcibly cleared outside the White House to make way for President Trump to walk across the street to St. John's Church for a photo op, holding a Bible, following Rose Garden remarks threatening to deploy the military into Americans cities. pic.twitter.com/YZG5EvNY44

Sen. Sasse said on Tuesday that while there is “no right to riot,” “no right to destroy to others’ property,” and “no right to throw rocks at police,” there is a “fundamental” and constitutional “right to protest.”

“[A]nd I’m against clearing out a peaceful protest for a photo op that treats the Word of God as a political prop,” Sasse said.

Sasse said that “[e]very public servant in America should be lowering the temperature and that means saying two basic truths over and over.”

The first truth, Sasse said, is that police injustice “like the evil murder of George Floyd” is “repugnant and merits peaceful protest aimed at change.” The second truth, according to the senator from Nebraska, is that “riots are abhorrent acts of violence that hurt the innocent.”

“Say both things loudly and repeatedly, as Americans work to end the violence and injustice,” he added.

Minutes ago, Canadian PM Justin Trudeau also weighed in on the “horror” unfolding in the United States. He paused for 21 seconds before answering a question about President Trump’s actions.