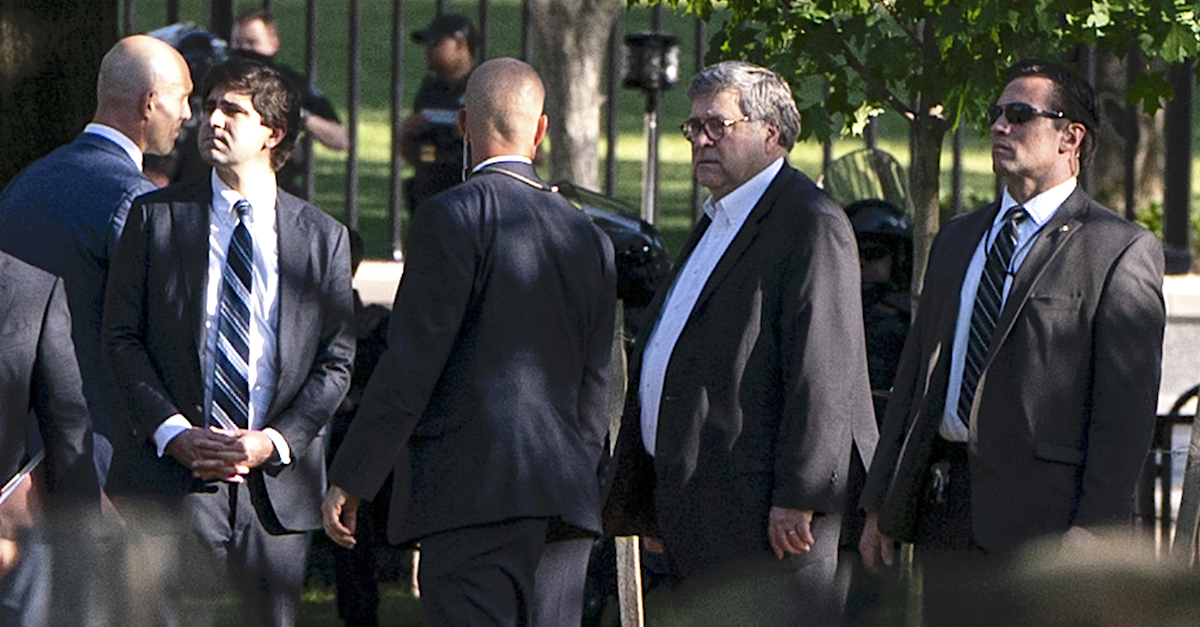 Attorney General William Barr “personally ordered law enforcement officials” to “push back protesters” before President Donald Trump spoke from the Rose Garden and eventually emerged from the White House Monday to be photographed holding a Bible in front of a church, the Washington Post has reported.

“Barr ordered law enforcement officials on the ground to extend the perimeter around Lafayette Square, which is adjacent to the White House,” the report stated. It later used less forceful language, noting that the decision for law enforcement to take the move “had been made late Sunday or early Monday” and that “Barr was a part of the decision-making process.”

The reportedly planned move by law enforcement was set to occur Monday afternoon. “Barr went to survey the scene and found the perimeter had not been extended,” the report continued. “The attorney general conferred with law enforcement officials on the ground, which the official said is captured in a video of the incident.”

Quoting the unnamed official, the Post reported that Barr “conferred with [the police] to check on the status and basically said: ‘This needs to be done. Get it done.'”

The protesters, described as “peaceful,” were pushed back “with riot shields and horses.”

Barr apparently “assumed that any resistance from the protesters . . . would be met with typical crowd-control measures,” the official said, according to the Post. The official said the orders were not directly related to Trump’s decision to walk to the church. “This plan was happening, regardless of any plans of the president,” the official was quoted as saying.

Barr on Tuesday congratulated the various law enforcement agencies on the ground in Washington, D.C. and said Monday “night was a more peaceful night” because of it. “Working together, federal and local law enforcement made significant progress in restoring order to the nation’s capital,” he said.

“There will be even greater law enforcement resources and support in the region tonight,” Barr said of Tuesday evening. “The most basic function of government is to provide security for people to live their lives and exercise their rights, and we will meet that responsibility here in the nation’s capital.”

The Attorney General is the top law enforcement officer in the country, the leader of an agency meant to protect Americans' constitutional rights.

Barr betrayed that mission by ordering the violent and systematic violation of peaceful protesters' rights. He should resign. https://t.co/aYAdggfClL

This is the danger of an attorney general — so called not because it is a military position, but because he is the attorney who handles general matters — playing make-believe like a real battlefield general. https://t.co/1gOQWhQqzP