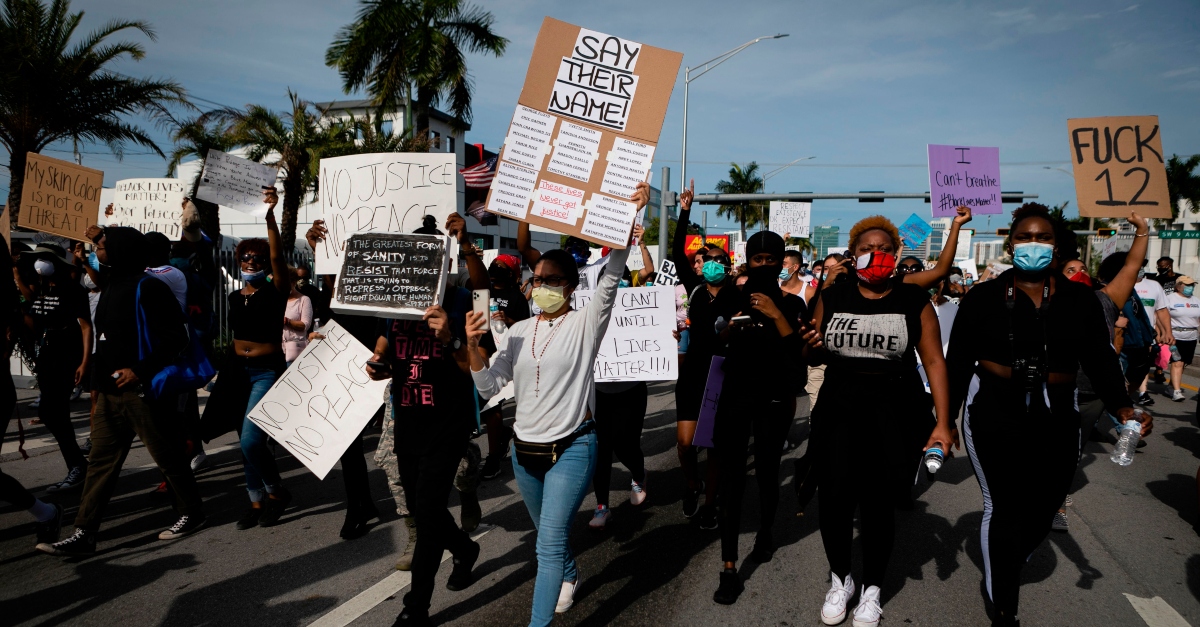 Protestors march during a rally in response to the recent death of George Floyd in Fort Lauderdale, Florida on May 31, 2020.

A prosecutor in Broward County, Florida is out of a job because of a Facebook post in which she compared protesters to zoo animals.

“Following our review of the Facebook posting by Ms. Amy Bloom, we have made the decision to terminate her effective immediately,” the Broward State Attorney’s Office said in a statement obtained by The South Florida Sun Sentinel. “The views expressed in that posting are entirely inconsistent with the ideals and principles of the Broward State Attorney’s Office and the duties and responsibilities of an assistant state attorney.”

Protesters popped up nationwide after Minnesota man George Floyd died after police began to arrest him, and one of the officers, Derek Chauvin, kneeled on his neck for over eight minutes. Incidents of violence were often reported. Oftentimes police were blamed. There were also reports of looting.

“When will people learn that their criminal acts and obnoxious protesting actually gets you nowhere,” she wrote in a Facebook post. “Act civilized and maybe things will change. I’ve never seen such animals except at the zoo. That goes for every single race and group of people out there. I’d rather be a golden retriever than a fellow human right now. Shameful.”

Amy is a Broward County prosecutor. Her decisions can mean the difference between freedom and prison. This is not okay. pic.twitter.com/W72QfhYlns

“I made a post and realized that it could be misinterpreted so I deleted it within seconds,” she wrote in a follow up post. “I believe in justice for all and that ALL lives matter. I don’t look at anybody by their color shape or size. Everyone is a person with equal rights and THAT is why I became a prosecutor to protect those rights and make sure that people don’t take advantage of anyone based on race or background and that goes for police and other members of law-enforcement as well.”

She said she was sorry that her post was “misinterpreted and now blasted everywhere but hopefully you can understand my mistakes and see my true feelings. I would never discriminate against anyone and if you know me… then you know that.”