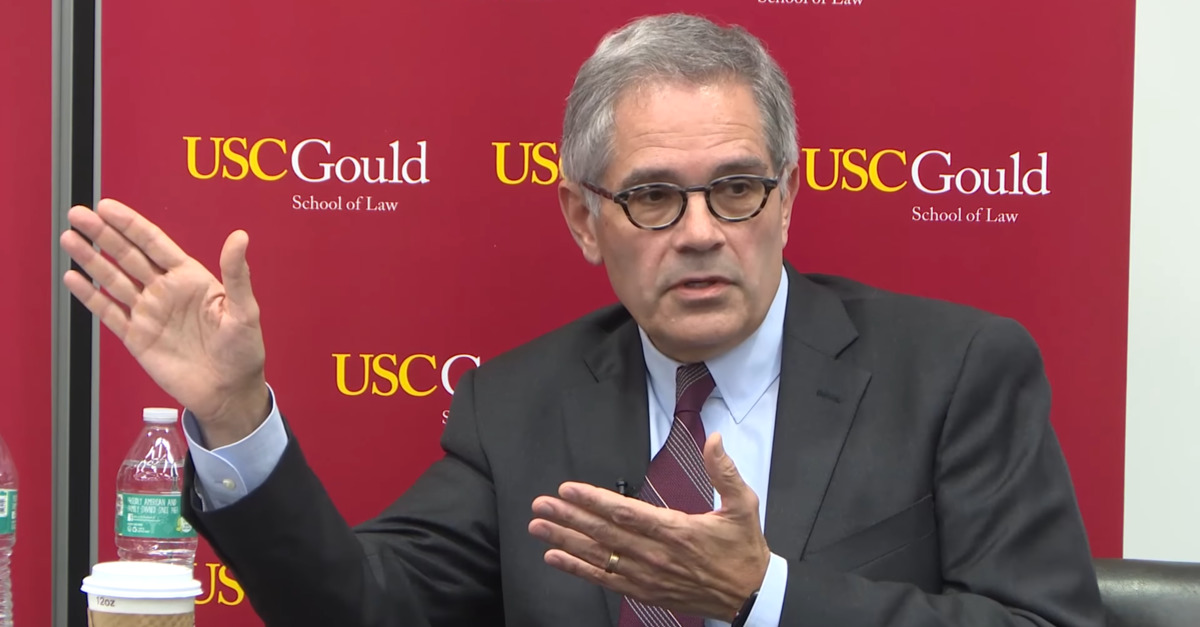 Customs and Border Patrol (CBP) agents operating under the direction of Acting Department of Homeland Security (DHS) Secretary Chad Wolf have been accused of rounding up protesters and whisking them away in unmarked vans since at least July 12 in Portland, Oregon.

Critics of the White House and civil libertarians have responded to those detentions with widespread revulsion and have questioned the legal justification for the practice. Many observers have also raised constitutional concerns with social media images of unidentified and camouflaged federal agents effectively operating as a police force in cities that, at least publicly, say they don’t want them there.

Other legal experts have weighed in similarly while rhetoric has steadily ramped up to describe the state of affairs in the Pacific Northwest.

Krasner, for his part, is sticking with the kidnapping characterization and cast his office’s decision to potentially clash with federal agents as a necessary bulwark against “fascism.”

“My dad volunteered and served in World War II to fight fascism, like most of my uncles, so we would not have an American president brutalizing and kidnapping Americans for exercising their constitutional rights and trying to make America a better place, which is what patriots do,” the district attorney said in a statement.

The self-styled “progressive prosecutor” made clear that his warning was meant to apply specifically to law enforcement keen to reprise the Portland method in Philadelphia. The DA’s office framed its broadside as a direct response to President Donald Trump‘s “verbiage claiming he may deploy federal law enforcement to American cities including Philadelphia.”

Trump threatened to send federal troops into the city on Monday evening.

“Anyone, including federal law enforcement, who unlawfully assaults and kidnaps people will face criminal charges from my office,” Krasner continued. “At trial, they will face a Philadelphia jury. It’s the least we can do to honor those who fought fascism, including those who are fighting it even now.”

While DHS designs to nationalize the Portland method have been met with scorn by some, federal authorities insist their actions are popular, appropriate and necessary.

“With as much lawbreaking is going on, we’re seeking to prosecute as many people as are breaking the law as it relates to federal jurisdiction,” DHS Deputy Secretary Ken Cuccinelli recently told National Public Radio. “That’s not always happening with respect to local jurisdiction and local offenses. But, you know, this is a posture we intend to continue not just in Portland but in any of the facilities that we’re responsible for around the country.”

The prospect of federal officers being arrested by local police for following orders would be unprecedented, and it is not clear if the Philadelphia Police Department would cooperate with such requests.

Krasner has aggressively pursued police misconduct since taking office in 2018, and his office suggested that the local police force would swimmingly agree to such moves.

“Our office charges police officers with crimes pretty regularly, not because Philly Police are necessarily more likely to engage in criminal behavior, but because District Attorney Krasner applies the law to everyone equally. Anyone who comes into the city and assaults people or grabs them off the streets without legal justification should be investigated and if the facts warrant, criminally prosecuted – regardless of their badge or title or whatever else,” a statement to Law&Crime by Krasner spokesperson Jane Roh says. “When our office does open investigations into law enforcement personnel, we generally work with Philly Police to make arrests – whether assigned to the department or to our office (where they are referred to as DA Detectives).”