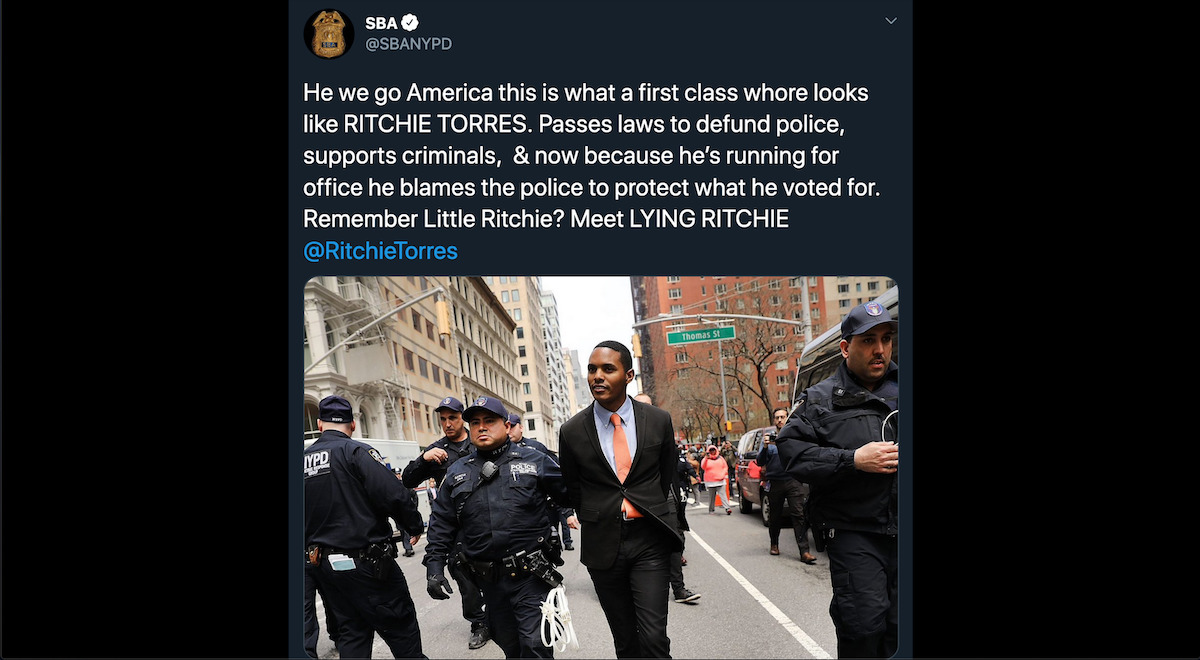 Ritchie Torres currently represents a portion of the Bronx on the council and is all-but certain to represent New York’s 15th Congressional District after the 2020 general election. The district is considered the most Democratic in the entire country.

On Friday morning, Torres stood behind a lectern and effectively endorsed the idea that the NYPD has mounted a work slowdown over the past few months in response to sustained racial justice protests, citing a decline in gun-related arrests.

“In 2020, we saw nearly a doubling of the surge in summertime shootings,” Torres noted. “The NYPD is making fewer gun arrests, solving fewer gun cases, responding more slowly to gun crimes in progress. The dramatic increase in gun violence can be best explained by the dramatic decrease in gun enforcement. That’s why we are calling for an investigation to examine whether there is, in fact, a work slowdown and to what extent has the work slow down driven the growth in violence in New York City.”

“He we go America this is what a first class whore looks like RITCHIE TORRES,” the SBA’s official Twitter account posted. “Passes laws to defund police, supports criminals, [and] now because he’s running for office he blames the police to protect what he voted for. Remember Little Ritchie? Meet LYING RITCHIE.”

Response to the SBA’s tweet was almost uniformly negative.

“This is is the trashiest tweet on Twitter today,” said Bloomberg News legal reporter Erik Larson. “And that’s saying a lot. Astounding that anyone in a position of authority would think this language is appropriate. What a disgrace to New York.”

“And of all the words you could have chosen, to call an openly gay Black and Latino future congressman a ‘whore’ shows just how racist, homophobic and out of touch your so-called police union has become,” noted CNN commentator Keith Boykin. “You bring nothing but shame and dishonor on the New York Police Department.”

The *checks notes* president of the sergeant’s benevolent association which is comprised of 13k current and former nypd sergeants.

This is the mindset of the guy they picked to lead this org. Defund the police. https://t.co/XVzrpWLERw

“You’re such a dumb, loudmouthed baby, ed mullins,” said commentator Ned Pyle. “You must have been an absolute shit cop.”

The NYPD has a well-documented history of engaging in unofficial work stoppages and slowdowns.

In dramatic fashion, following the civilian-involved shooting of officers Rafael Ramos and Wenjian Liu in 2014, law enforcement in New York City ground to a halt. Police blamed anti-police rhetoric for the officers’ deaths. Consequently, felony arrests careened by 50 percent while enforcement of misdemeanors–writing of criminal summonses and traffic violations–went down by 90 percent.

“This is about math,” Shea said.