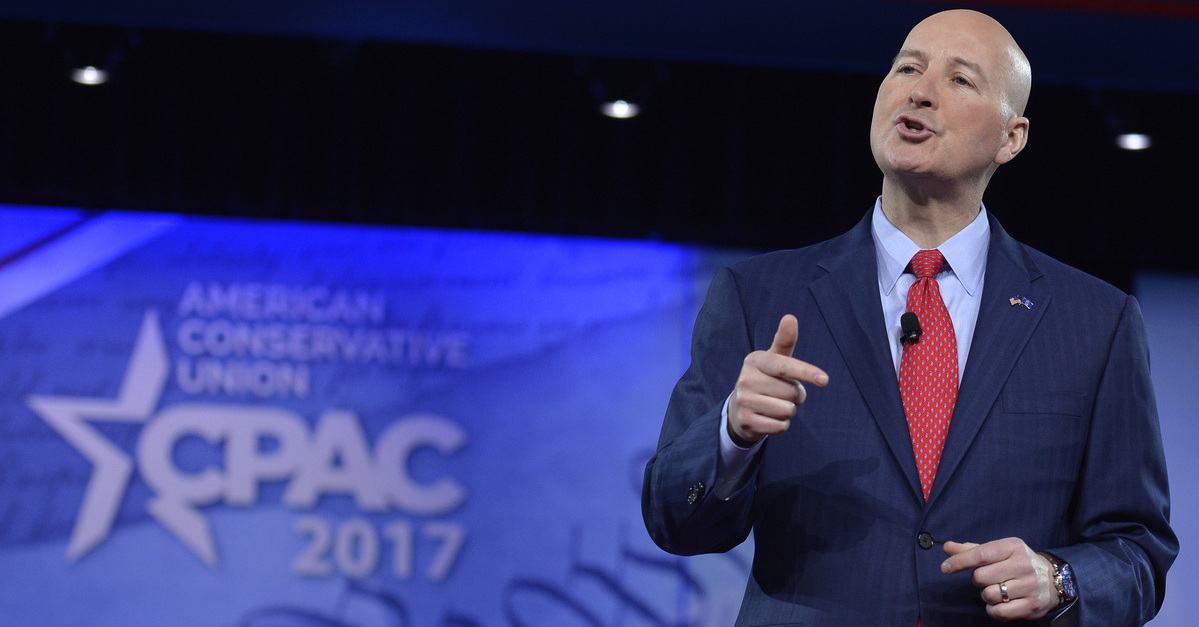 Nebraska Gov. Pete Ricketts (R) allegedly referred to African Americans as “you people” during a Monday meeting with faith and community leaders. On Tuesday, he apologized. On Wednesday, his office disputed the claim.

Pastor Jarrod Parker of St. Mark Baptist Church was meeting with Ricketts and other authorities to express concerns after a white bar owner in downtown Omaha shot and killed a black protestor over the weekend. The Douglas County Attorney’s Office determined Jacob Gardner was acting in self-defense and declined to press charges over the fatal shooting of 22-year-old James Scurlock because the two had allegedly been fighting prior to the incident.

Community leaders and Scurlock’s family, on the other hand, are calling for Gardner to be charged and his death is quickly becoming part of the national conversation about racism amidst the ongoing protests ignited by the Minneapolis police killing of George Floyd.

A video of Parker condemning Ricketts for allegedly using the phrase–long understood to be racially coded and bigoted toward black people–went viral across various social media platforms on Tuesday.

Parker outlined the issues discussed at the meeting.

“Other pastors showed up in the meeting and a few African-American leaders,” he noted. “We met for an hour and a half on the killing of the young man at the hands–young black man–at the hands of a white man the other night in downtown Omaha. We met on it. I put context to the issues surrounding the systematic racism that produced it.”

He then, in his monologue, described the governor’s comments and his response:

And ladies and gentlemen, I walked out of the police chief’s office. I walked out on Governor Pete Ricketts as he said–he called us “you people.”

He called black pastors and black leaders in Omaha “you people” and I walked out on him. That’s why the city is going to go up in flames, Mrs. Mayor and Mister Chief–you’re not listening. And you can’t listen, because at the top of the state is a racist governor.

“He called us ‘you people,’ and I walked out on him,” Parker continued, asking for viewers to make his video go viral. “The governor of the state of Nebraska called black people ‘you people’–black pastors and black leaders in the City of Omaha.”

According to local KETV affiliate, newly-released audio indicates that Ricketts said “where the hell were you guys” at the meeting in question.

Reporter José Zozaya noted “the audio provided also deletes a second of audio before the governor’s comment” and that the station could not verify “why that omission has been made.”

“I want to apologize to Pastor Parker directly as well as all the folks,” Ricketts told The Boss 95.7 morning show host William King on Tuesday. “I chose my words poorly. Charge it to my head not my heart. My heart is with working with the community of North and South Omaha to be able to improve the lives of people there–we want to make lives better.”

“In the heat of the moment, I said things that were trigger words,” the governor continued. “Here’s the deal. You know, I’m engaging with the African-American community, I’m learning the culture, and I’m learning, and I made a mistake. And so, I apologize. I’m sorry.”

The governor’s office later reconfigured those comments as the following official statement:  “I chose my words poorly, and apologized when it became apparent that I had caused offense.”

Ricketts also noted that there is an ongoing investigation into Scurlock’s killing and called for anyone with additional evidence to step forward.

Law&Crime has reached out to the governor’s office for additional comment and clarification; no response was forthcoming at the time of publication.

Editor’s note: this article has been amended post-publication to include the update on Ricketts’ comments after new audio was released.