Mark McCloskey and Patricia McCloskey Could Be Charged | Law & Crime 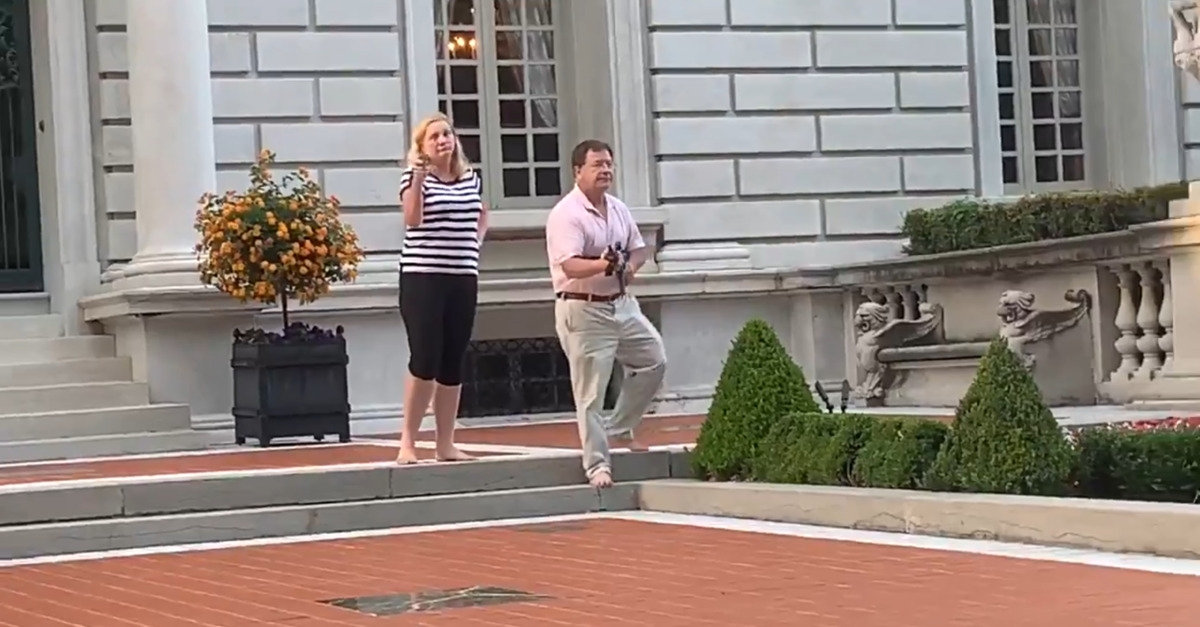 Two attorneys in St. Louis who brandished firearms at Black Lives Matter protesters over the weekend could be charged with a felony.

Here, personal injury attorneys Mark McCloskey and Patricia McCloskey went viral after being featured in a video holding what appears to be an AR-15 style rifle and a small pistol, respectively.

The couple stood, by most accounts menacingly, in front of their lavish and palatial home. The McCloskeys could be seen pointing their guns, by many accounts poorly, at protesters who walked past on the way to St. Louis Mayor Lyda Krewson’s nearby mansion in order to condemn Krewson’s doxxing of other racial justice activists who advocated budget cuts for the St. Louis Police Department last week.

“State law does not prohibit open carrying of firearms, but does prohibit exhibiting ‘any weapon readily capable of lethal use’ in angry or threatening manner in presence of one or more persons,” noted attorney Mark Zaid. “Their actions should have consequences.”

Zaid later cited an explainer by conservative author Jim Swift which suggested the McCloskeys were “screwed.”

In a section dedicated to the criminal issue, Swift considers the Show Me State’s unlawful use of deadly weapons statute and opines:

As for the first part of the statute: Were these guns loaded? No one other than the McCloskeys knows. It is possible that if they are charged, the McCloskeys could argue that the guns were unloaded and that they were thus not “readily capable of lethal use.” After all, these are clever trial lawyers!

But maybe not clever enough.

Under case law decided by the Missouri Court of Appeals for the Western District and relied upon by the Missouri Supreme Court, the state does not have to actually prove that a weapon was loaded during a criminal incident in order to satisfy the “readily capable of lethal use” language in the statute.

In State v. Lutjen, a defendant argued that a reformulation of the state’s criminal code “intends to impose upon the prosecution the proof of a loaded firearm in order to sustain conviction of the offense under § 571.030.” The appeals court ruled that was not the case.

We reject, however, the premise that to convict under § 571.030 the prosecution must prove that the firearm was loaded.

“To hold that it is incumbent upon the state to prove affirmatively that a pistol…which is exhibited in a rude, angry, and threatening manner, is loaded, as a condition precedent to a conviction, would be practically to render the statute unenforceable. This is not only the view which this court has already taken [citations], but it is the view held in all other jurisdictions…”

The [Missouri Jury Instructions and Charges] definition of readily capable of lethal use to mean readily capable of causing death does not impede our conclusion that a loaded gun need not be proven. Common equivalents of the word readily are easily or speedily. A gun is easily transformed into a lethal weapon by the insertion of bullets. The statute does not contemplate that the gun be already lethal [loaded], but only that the weapon can readily become lethal [by loading].

In other words, under longstanding precedent in Missouri, guns don’t even have to be loaded to count under the relevant statute here. The McCloskeys could attempt to argue this point, of course, but the state’s courts have repeatedly rejected similar such arguments.

St. Louis University School of Law Professor John Ammann offered local NBC affiliate KSDK another avenue of potential prosecution. He said the McCloskeys’ gun-toting incident might qualify as an assault because brandishing their weapons in such a fashion could have reasonably put the peaceful protesters in fear for their safety.

Under Missouri law, the distinct common law concepts of assault and battery are rolled into the same statute and defined under various degrees of assault. Section 565.056 (3-4) defines assault in the fourth degree as any conduct which “purposely places another person in apprehension of immediate physical injury” or “recklessly engages in conduct which creates a substantial risk of death or serious physical injury to another person.”

RELATED: Will Gun-Wielding St. Louis Attorneys Be Able to Hide Behind the State’s ‘Castle Doctrine’?

“People have a right to threaten force if they are threatened,” Ammann told the outlet. “However, if a group of protesters is walking by a home and not doing anything to the homeowners specifically, then they don’t have the right to threaten lethal force without an imminent threat.”

Assault in the fourth degree is a class A misdemeanor.