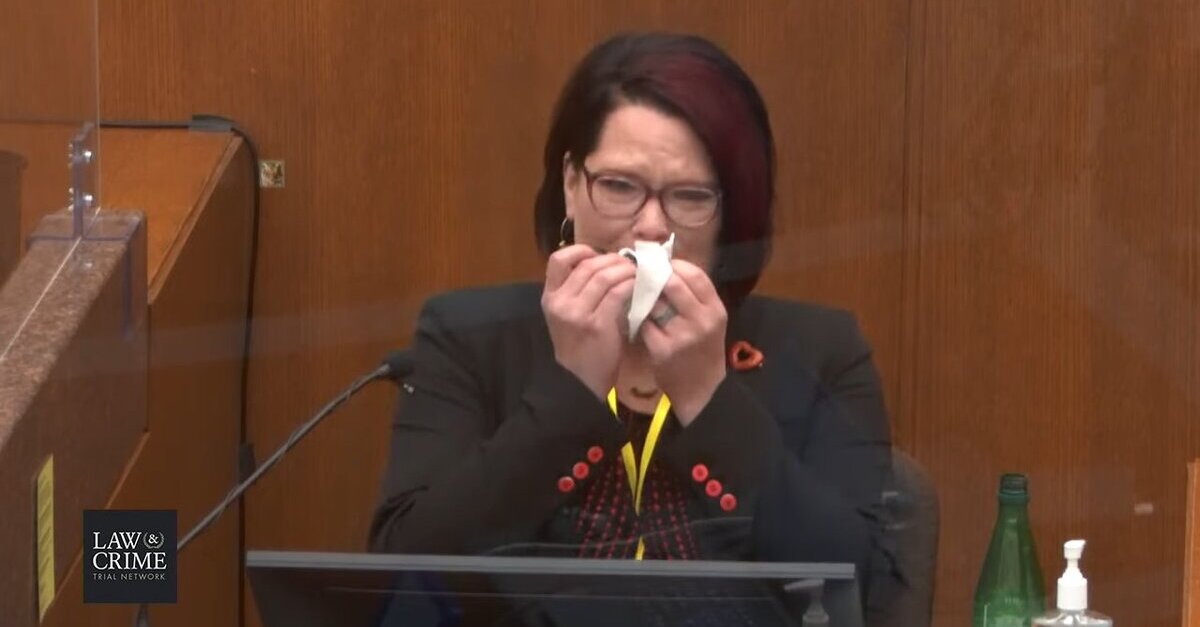 The defense for former police officer Derek Chauvin spent a significant amount of time on Thursday focusing on George Floyd’s history of drug addiction, ostensibly to create doubt in the jury’s mind as to what caused Floyd’s death on May 25, 2020. Both the prosecution and attorneys representing Floyd’s family pushed back against this strategy in and out of court.

Courteney Ross, Floyd’s surviving girlfriend, was the first witness called on Thursday morning. Her testimony began by tearily recounting how she and Floyd met at the Salvation Army in August 2017, where he worked as a security guard at the time. As she was visibly upset in a corner of the lobby and worrying about her children, the “raspy”-voiced Floyd asked if he could pray with her.

“We had our first kiss in the lobby and that is when our relationship started,” she told the jury as she cried—noting this was one of her “favorite” stories to tell. “Just about everyday we saw each other.”

After discussing Floyd’s reaction to the 2018 death of his mother, Ross said that the couple “both suffered from opioid addiction.”

The prosecution asked how that came to be the case.

“It is a classic story of how many people get involved in opioids,” she said. “We both suffer from chronic pain. Mine was in my neck, his was in his back. We both had prescriptions that were filled. And we got addicted. We tried hard to break that addiction many times.”

Ross’s testimony continued along these lined for awhile longer.

She recounted how the drugs were allegedly obtained “on the black market” when prescriptions ran out and how the abuse and problems seemed to ebb and flow. The prosecution’s first turn with the witness ended as she was asked about Floyd’s positive coronavirus diagnosis and how that might have come about.

On cross examination, the defense opened with a reference to Ross’s “struggles with opioid addiction.”

Chauvin’s attorney Eric Nelson pressed Ross about alleged drug purchases from a man named Morries Hall and a woman named Shawanda Hill–neither of whom seemed to hold a particularly high place in the witness’s esteem.

Nelson pointed to an FBI interview in which Ross allegedly admitted to obtaining a certain kind of pill from March to May of 2020. The witness initially couldn’t recall saying that and when provided with a transcript of her interview said she was “shocked” and “don’t know what I mean by some of the things I said,” prompting the defense to call for her words to be stricken from the record.

After a sidebar, Nelson again referenced the FBI interview regarding the pills before noting that Floyd spent five days in the hospital due to an apparent overdose in March of last year.

Ross later said she believed Floyd was “clean” for the majority of time following the apparent overdose—up until roughly two weeks or so before his death when she “noticed a change in his behavior.”

Prosecutor Matthew Frank attempted to clean things up a bit with a series of questions about the March pill use.

Ross said those pills appeared to be some kind of a stimulant.

“Obviously you did not die from it,” Frank noted. “Did you also see Mr Floyd taking that pill?”

Ross replied that they didn’t take those pills together.

“Did you know that Mr. Floyd had some of those pills?” Frank asked. “Obviously he did not die.”

As the defense attempts to construct the narrative that George Floyd’s cause of death was the Fentanyl in his system, we want to remind the world who witnessed his death on video that George was walking, talking, laughing, and breathing just fine before Derek Chauvin held his knee to George’s neck, blocking his ability to breathe and extinguishing his life for all to see. Tens of thousands of Americans struggle with self-medication and opioid abuse and are treated with dignity, respect and support, not brutality. We fully expected the defense to put George’s character and struggles with addiction on trial because that is the go-to tactic when the facts are not on your side. We are confident that the jury will see past that to arrive at the truth — that George Floyd would have lived to see another day if Derek Chauvin hadn’t brutally ended his life in front of a crowd of witnesses pleading for his life.

After a long morning break, paramedic Seth Bravinder gave testimony about his immediate response to, and subsequent actions on, the scene.

Bravinder arrived roughly one minute and thirty seconds before Chauvin removed his knee from Floyd’s neck, he said. At the time of his arrival, according to the paramedic, Floyd’s heart had already stopped beating and his patient’s body was not moving.

“I didn’t see him moving or breathing,” he told the jury.