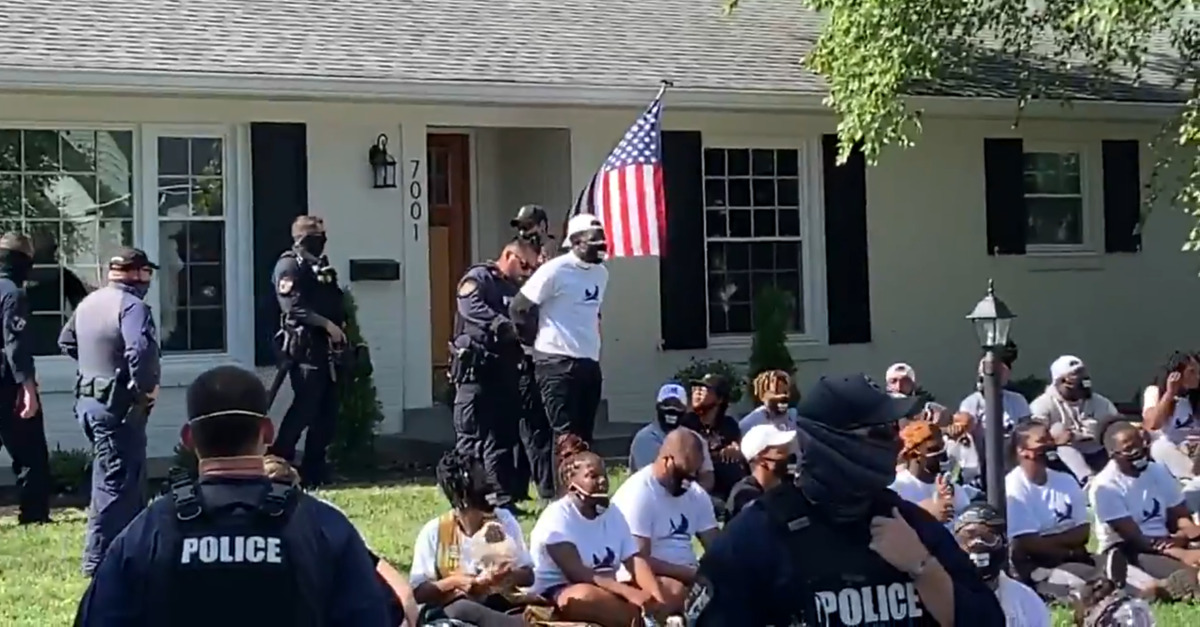 Kentucky’s Republican Attorney General Daniel Cameron accused Black Lives Matter protesters of “trespassing” in front of his house after a demonstration on Tuesday evening calling for criminal charges against the police officers responsible for the killing of Breonna Taylor.

The stated goal of today’s protest at my home was to “escalate.” That is not acceptable and only serves to further division and tension within our community. Justice is not achieved by trespassing on private property, and it’s not achieved through escalation. It’s achieved by examining the facts in an impartial and unbiased manner. That is exactly what we are doing and will continue to do in this investigation.

Taylor’s death quickly became part of the national conversation and widespread demonstrations over systemic racism in American policing following the Minneapolis Police Department’s killing of George Floyd in late May.

An EMT, Taylor was actually killed earlier than Floyd–when the Louisville Metro Police Department served a no-knock warrant on her apartment in early March because they believed she had received drugs intended for someone who lived 10 miles away–despite the local postal inspector contradicting that belief.

As several officers raided the apartment based on their own bungled understanding of the evidence, Taylor’s boyfriend Kenneth Walker acted in self defense, firing at the police he believed to be intruders. Sergeant Jonathan Mattingly was injured by Walker’s attempt to protect his girlfriend and her home.

The officers fired back more than 20 rounds and Taylor was shot eight times. She was pronounced dead at the scene.

Afterwards, the police involved in the incident filed an almost entirely blank report that incorrectly claimed Taylor had suffered zero injuries. Among other discrepancies, the report similarly claimed that no force had been used when entering Taylor’s apartment but this was also incorrect–a battering ram was used by the police to gain entry.

Various local, state and federal investigations commenced in the aftermath of the grisly and highly criticized killing. To date, however, none of the three officers involved in Taylor’s death have been charged, which led to the Black Lives Matter protests outside of the Kentucky AG’s home on Tuesday.

Led by organizers with Until Freedom, several dozen people made their way to Cameron’s home in the Graymoor-Devondale neighborhood of Lousville beginning late afternoon. Louisville and St. Matthews police officers blocked off the neighborhood as the throng of racial justice advocates arrived.

The mothers of Taylor and Ahmaud Arbery attended the protest during which organizers led a call-and-response chant.

“Say her name,” a voice implored; “Breonna Taylor,” the crowd roared back. At least 20 arrests were made at the demonstration.

Cameron has previously declined to speculate on a timeline for his own investigation into Taylor’s death. He continued to urge patience after the direct action had finished.

“From the beginning, our office has set out to do its job, to fully investigate the events surrounding the death of Ms. Breonna Taylor,” Cameron said. “We continue with a thorough and fair investigation, and today’s events will not alter our pursuit of the truth.”