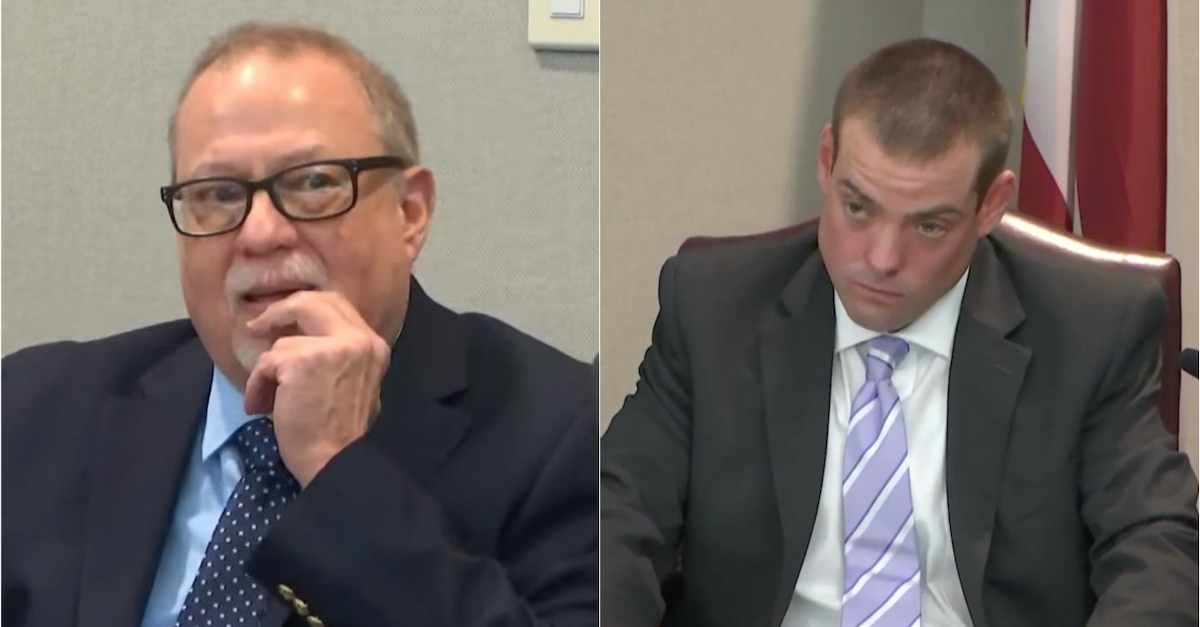 When a Georgia police officer showed up sick to work on the day of Ahmaud Arbery’s death, he found Arbery on the ground in a pool of blood. Blood spatter was visible on gunman Travis McMichael’s face and his father Greg McMichael’s hand.

“This ain’t no shuffler,” the elder McMichael said of the slain 25-year-old Black man, according to a bodycam transcript recited in court. “This guy’s an asshole.”

Lead prosecutor Linda Dunikoski’s questioning brought out the grim context of the remark.

“How far away were you from the dead body of Ahmaud Arbery when he called him an ‘asshole’?” Dunikoski asked.

Officer Brandeberry replied that he was “20 to 30 feet away, maybe, maybe a little bit further.”

A Georgia jury heard the exchange during the third day of the trial of the McMichaels and William “Roddie” Bryan, the third man charged with malice and felony murder in connection with Arbery’s death.

On Monday, another officer told a jury that Bryan mentioned blocking Arbery five times with his car, in a chase that the accused depicted as wild. Bryan was quoted saying that he was nearly “thrown through the damn windshield trying to chase this joker,” according to this testimony.

All three men claim self-defense, alleging that they acted out of a duty to residents of their neighborhood in Brunswick, Ga., which they say experienced an uptick in crime before Arbery’s shooting death on Feb. 23, 2020.

On Friday, Travis McMichael’s attorney Bob Rubin went so far as to suggest to the jury that his client acted out of “duty and responsibility.”

Seeking to undermine this defense, Dunikoski asked Officer Brandeberry about the words that did not appear in the transcript of his interview with Greg McMichael.

“While speaking with you, did Greg McMichael ever use the word ‘burglary’?” she asked.

“Do he ever use the word ‘trespass’?” Dunikoski pressed.

“Did he ever tell you while you’re talking to him that he was attempting to make a citizen’s arrest?” she continued.

The witness once again answered in the negative.

On cross-examination, Greg McMichael’s attorney Franklin Hogue suggested that the difference was a matter of semantics. The defense attorney quoted his client telling the officer: “He’s the one breaking in all these houses out here,” referring to Arbery.

Brandeberry agreed that Greg McMichael did say that.

The jury has been insulated from much of the controversy about the police investigation that preceded the trial. Footage of Arbery’s shooting death would not emerge for months, showing three white man pursuing a young, Black man—and one of the trio fatally shooting him with a shotgun. Arrest and murder charges soon followed national outrage.

Arbery’s mother Wanda Cooper alleged in a federal lawsuit that Glynn County police engaged in a nearly three-month cover-up of her son’s alleged murder, in a case that remains pending.

Without eliciting these details, prosecutor Dunikoski’s redirect questioning highlighted what appeared to be the slapdash nature of Officer Brandeberry’s investigation. Brandeberry testified that he had a head cold on the day of the shooting, but he reported for duty because he had not accrued time off yet.

Asked how long his report was in the homicide case, Brandeberry replied: a page and a paragraph.

Brandeberry said he did not review anyone else’s bodycam or interview detectives, only reporting what he saw.