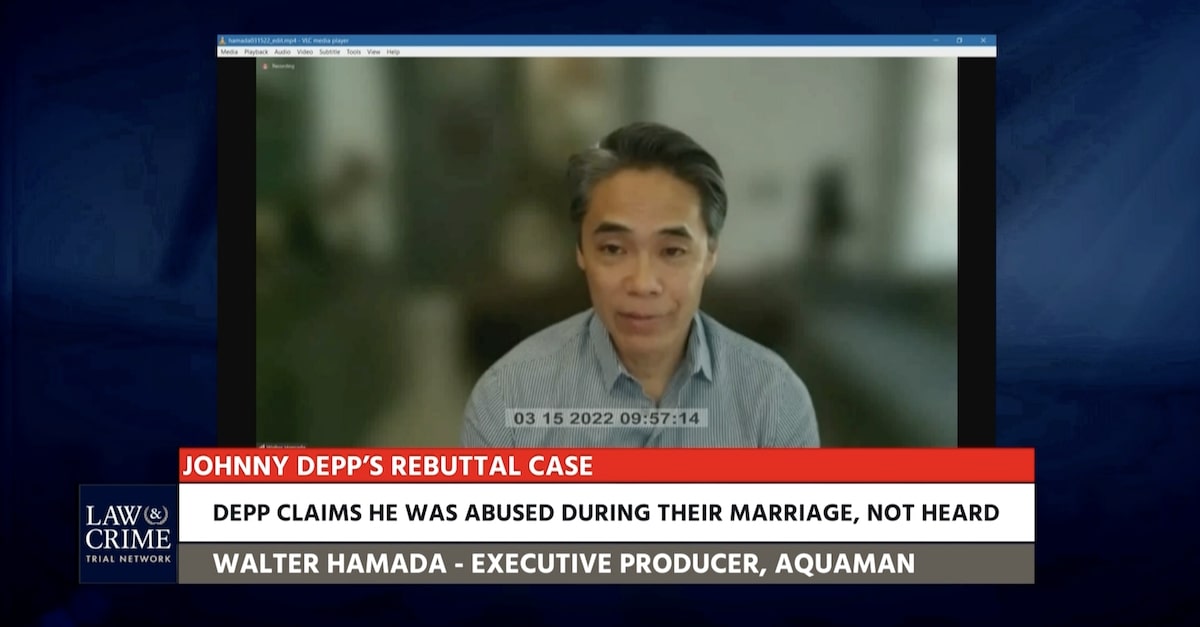 Aquaman‘s executive producer said in a video deposition played in court on Tuesday that its co-stars Amber Heard and Jason Momoa “didn’t really have a lot of chemistry together,” potentially undermining the actress’s claim that Johnny Depp’s alleged defamation damaged her career.

“The reality is, it’s not uncommon on movies for for two leads to not have chemistry, and that it’s sort of movie magic and editorial, the ability to sort of put performances together,” said Walter Hamada, the president of D.C.-based film production at Warner Bros. Pictures.

“And with the magic of, you know, a great score and how you put the pieces together, you can fabricate, sort of, that chemistry,” Hamada added. “And so I think in the end of the day, I think if you watched the movie, they looked like they had great chemistry. But I just know that through the course of the post-production that it took a lot of effort to get there. Sometimes, you don’t. Sometimes, it’s very easy. You just put the characters on screen together and they work. And sometimes, it’s harder.”

Just days before Aquaman‘s release, Heard’s byline appeared in a Washington Post op-ed stating that she “became a public figure representing domestic abuse” two years earlier. The editorial did not mention Depp by name, but that was the year she filed a restraining order, accusing him of intimate partner violence.

Depp filed a $50 million lawsuit accusing her of defaming him by implication, and Heard later countersued for $100 million after the Pirates of the Caribbean star’s lawyer Adam Waldman characterized the actress’s allegations as a “hoax.” She sought double the amount of damages Depp did, alleging that he sidelined her skyrocketing career through a smear campaign.

Throughout the trial, Heard’s legal team that complained that Depp supporters barraged her with rude hashtags and mean tweets, including #WeJustDontLikeYouAmber, #AmberHeardIsAnAbuser, and #AmberTurd, a reference to Depp’s allegation that Heard soiled their marital bed as a practical joke. (Heard denied the alleged defecation incident, blaming the feces on a Yorkshire terrier with bowel-control problems from consuming Depp’s cannabis.)

Earlier on Tuesday, Judge Penney Azcarate denied Depp’s motion to strike those counterclaims, finding that it’s up to a jury to determine whether they would stick. Depp’s earliest rebuttal witnesses targeted Heard’s damages claims.

Hamada testified that Heard was never released from her Aquaman 2 option agreement or rehired by Warner Bros.

No pay increase for Heard was ever contemplated under that contract, Hamada said.

“As a rule, as a company we make these we go through a lot of trouble when we make our deals with our actors we get options on them for subsequent movies and I think traditionally, prior to me joining the company, every option was renegotiated and one of the things that we were trying to put a reining on was not renegotiating every deal with the understanding that people come in and make these deals and they have an understanding that there will be options and that there’s a deal in place and there was a big part of our philosophy that we were going to hold people to their options moving forward,” he said.

Hamada claimed flatly that Waldman’s allegedly defamatory statements did not factor into any casting decisions.