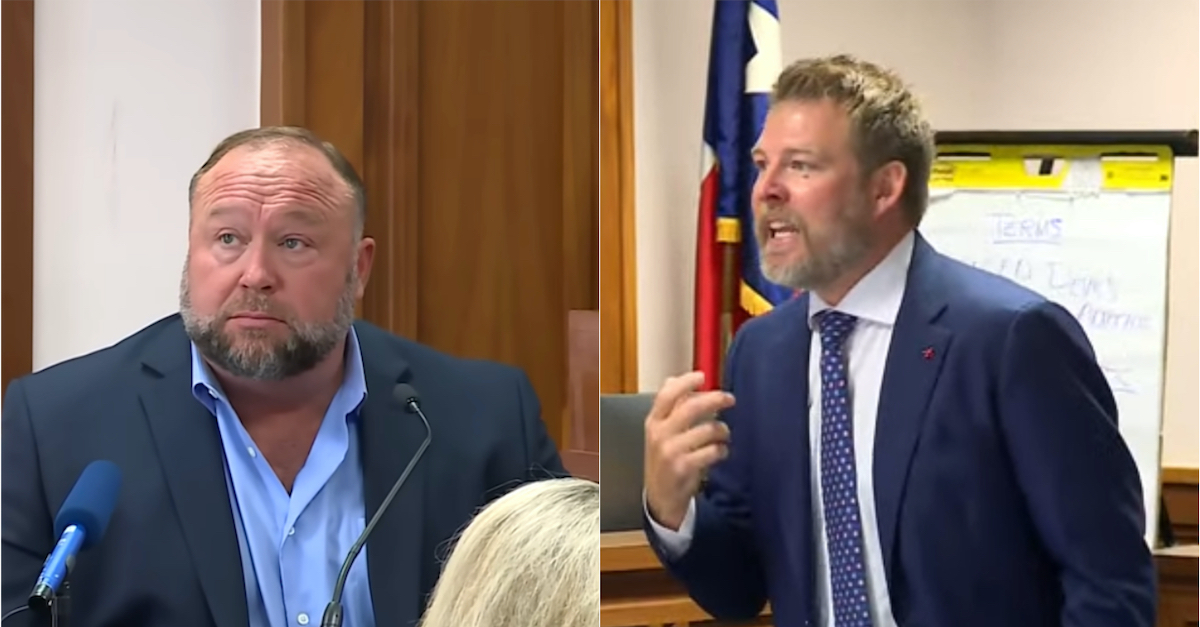 The day after a Texas jury slapped Alex Jones with a more than $4.1 million judgment, an attorney for the parents of a Sandy Hook victim asked a jury to impose punitive damages making up the difference for the full penalty requested: $150 million.

Expressing immense gratitude for their verdict so far, Ball said that the award will improve the lives of his clients, grieving parents Neil Heslin and Scarlett Lewis.

“You will now allow both of these fine people to begin the healing process that they should have been allowed to begin almost 10 years ago,” Ball said, referring to the child’s parents. “Your verdict is your voice, and your voice will reach wide and far outside the walls of this courtroom.”

The lawyer added, however, that the penalty to date amounts to less than two percent of Jones’s known assets.

“I can assure you that a reasonable inference from the evidence we have in this case right now is that Alex Jones hop and skipped his way out of this courtroom after he found out that the verdict,” Ball said.

Earlier on Friday, economist Bernard Pettingill Jr. testified for the family, and he found that — contrary to the Infowars broadcaster’s statements — he made more money, not less, after supposedly being “deplatformed.”

“He can say he’s broke — he has no money, but we know that’s not a fact,” Pettingill said.

Under Texas law, exemplary damages are typically capped at double the economic damages. The plaintiff’s lawyers argue that this ceiling isn’t applicable because the damages asserted aren’t economic in nature. Ball added that a strong message is also needed in light of Jones’s courtroom conduct.

After Heslin’s emotional testimony about his late son, Jones went on the air of InfoWars that day and attacked the grieving father as supposedly being “slow” and “on the spectrum.” Bell quoted that broadcast with palpable disgust.

“Saying that is ‘vile,’ standing here right now, is honest-to-God probably the largest understatement that I could ever make,” Ball said. “It demonstrates that Alex Jones does not care, that Alex Jones will not change, and that Alex Jones certainly has not and will not learn his lesson.”

Jones likewise took a swipe at the jury in a broadcast, pigeonholing them as a “blue-collar” panel that never heard about him. InfoWars attacked Travis County Judge Maya Guerra Gamble in a segment aired during the trial accusing her of having ties to pedophiles — and displaying an image of her seemingly in flames. Jones downplayed the imagery by claiming it showed her burning Lady Justice.

The right-wing broadcaster’s attorney Andino Reynal said during his summations that Jones apologized, but Ball noted that those apologies were followed by more attacks.

“So many times Jones has been given the opportunity to stop — to just literally, to just stop saying what you’re saying,” Ball said. “So many times he’s been given that opportunity to right a wrong. He says, ‘I’m sorry,’ and he immediately — after he says, ‘I’m sorry,’ says something awful, something defamatory. Alex Jones doesn’t want it both ways. Alex Jones wants it all ways.”

Noting that Jones is worth “almost $270 million” in known assets, Ball urged the panel to award an amount that will punish him.