EXCLUSIVE: X-Ray Photo, and Inside Details About Today’s Bombs 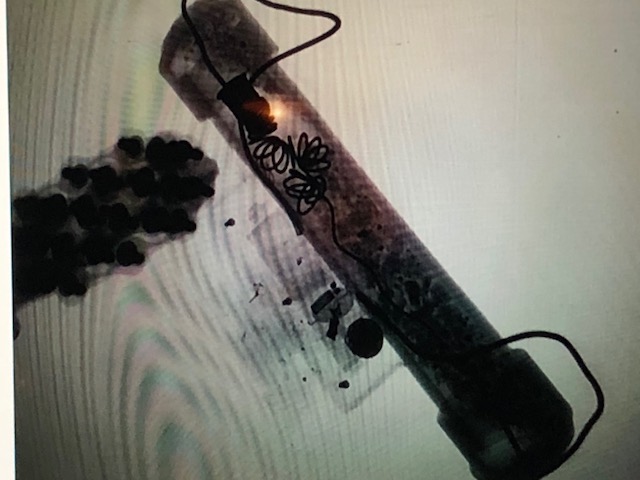 A former President, a former Secretary of State and a former head of the CIA received suspected pipe bombs through the mail today, following one to the billionaire activist George Soros received at his New York estate yesterday.

One went to President Barack Obama, another to Hillary Clinton’s Westchester home and another to former CIA Director John Brennan, care of CNN’s New York offices at the Time Warner building in Manhattan.

All the confirmed devices were hard plastic pipe bombs with sealed endcaps, possibly filled with low explosive or pyrotechnic powder, and rigged to what appeared to be wires and a digital alarm clock, according to sources. None of the devices exploded when they were handled at the intended victims’ addresses. According to one source, investigators are trying to determine whether there was “functional switch.” The devices appeared to be 1+” by 6” PVC pipe containing suspected pyrotechnic powder and possibly broken glass, according to persons familiar with the forensic reports. Power appears to have been provided by a button type battery hotwired to a digital clock.

Technicians are waiting to determine whether the devices were wired correctly or if a connection came loose or if they were constructed to provide an illusion that they could function, a highly trained source said.

All of the packages were contained in brown manila envelopes and the postage consisted of six “Forever” stamps. The senders were identified as either a political figure “and/or” a media agency. Debbie Wasserman Schultz, the former head of the Democratic National Committee is listed on the return address label of at least one envelope. Schultz, ironically, and her committee, were strong backers of Hillary Clinton’s presidential bid and her committee was heavily funded by Clinton entities.

Agencies involved the hunt for the bomber and in the safe removal of the parcels and examination and any detonation of the contents include the FBI New FBI Washington, New York City Police Dept., Westchester County Police Dept. the FBI Weapons of Mass Destruction Directorate and the FBI Counter-IED unit.  It is expected that they devices and packages will be examined for fingerprints, DNA samples, possible bomb making “signatures.” Investigators will seek surveillance photos at the location or locations where the parcels were mailed. They will also likely examine US Secret Service files and the files of other investigative agencies for known threats to the recipients.

All have been critical of the administration and policies of President Donald Trump. John Brennan has had his high level security clearance revoked by the president in a highly controversial move, given the tradition of rely on the knowledge and advice of former officials. However, Brennan has been a particularly outspoken critic of the president.