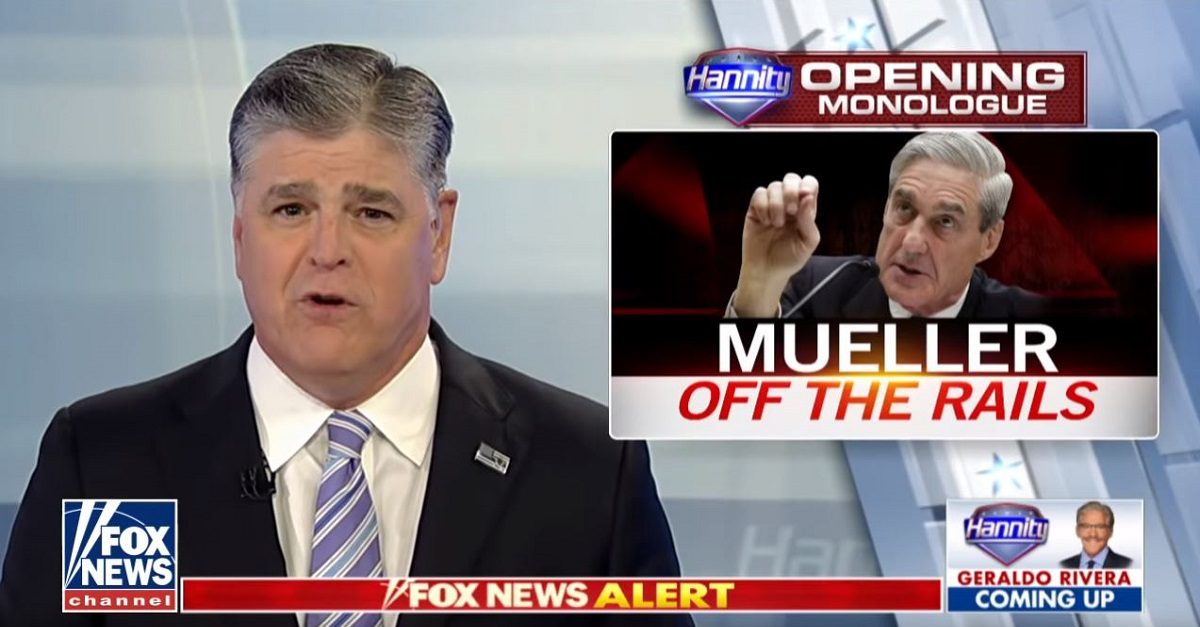 Sean Hannity was very busy getting the law very wrong over the weekend. This time, the law as it relates to the U.S. military system of justice. And how.

During the November 30 edition of The Sean Hannity Show, a caller brought up the idea that President Donald Trump might be able to investigate the U.S. Department of Justice by way of a military tribunal.

Here’s how the relevant part of that interaction went:

Hannity: He actually does have that authority.

Caller: …apparently cannot do its job.

Hannity: Well, it’s the–again, that would be within the realm of the executive branch of the government, which he is the head of. Yeah, he would.

The problem for Hannity here is that, no, Trump actually wouldn’t have any such authority whatsoever. And, for what it’s worth, nor would any other president.

There are two major sources of law which authorize military tribunals in the United States: (1) The Military Commissions Act (MCA); and (2) the Uniform Code of Military Justice (UCMJ).

First of all, the MCA cannot ever be used against U.S. citizens–much less a governmental body comprising an outsize component of the federal U.S. government–that’s simply not why it was passed, not why it exists and has no grant of authority to prosecute Americans or American institutions.

Second, while the UCMJ does contain some provisions for the prosecution of American citizens, none of those provisions come close to applying in the scenario described by Hannity and his call-in guest above. There’s simply no argument to be made here.

The Military Commissions Act only applies to “alien unprivileged enemy belligerents,” and Article 21 of the Uniform Code of Military Justice (the WWII authority that applies to citizens) requires a violation of the [international] laws of war.

Vladeck called Hannity’s claim “completely false.” Since the MCA simply does not and cannot apply to American citizens, let’s take a brief look at the UCMJ.

As Professor Vladeck pointed out, the only civilian-applicable authority contained in the UCMJ is Article 21. On its face, UCMJ Article 21 doesn’t appear to have much to say about any application to U.S. citizens. The statute itself reads, in full:

Article 21’s grant of authority to prosecute U.S. citizens–who are accused of violating the international laws of war–was read into the statute by the 1942 Supreme Court case Ex Parte Quirin. This landmark case concerned several U.S. citizens who were accused of working as German saboteurs during the Second World War. The court agreed that U.S. military authorities could try the alleged saboteurs under the UCMJ. The decision noted:

By the Articles of War, and especially [Article 21], Congress has explicitly provided, so far as it may constitutionally do so, that military tribunals shall have jurisdiction to try offenders or offenses against the law of war in appropriate cases. Congress, in addition to making rules for the government of our Armed Forces, has thus exercised its authority to define and punish offenses against the law of nations by sanctioning, within constitutional limitations, the jurisdiction of military commissions to try persons for offenses which, according to the rules and precepts of the law of nations, and more particularly the law of war, are cognizable by such tribunals.

Pro-Trump fantasists like Hannity and internet comments section galleries may be wont to declare that Trump is “at war” with the press and the DOJ. But this hyperbolic euphemism for media and legal adversity doesn’t come close to squaring the unsupported circle here.

Under both the UCMJ and Ex Parte Quirin, the phrase “law of war” is a legal term of art referring to the actual, substantive international and domestic laws of war. In Quirin, for example, the Supreme Court cites the Hague Convention of 1907, the U.S. War Department’s Rules of Land Warfare and former president Abraham Lincoln‘s Instructions for the Government of Armies of the United States in the Field, among others.

Such laws and rules are standards which outline acceptable–and unacceptable–conduct and guidelines for military personnel during actual wars–typically defined in the sense of sustained armed conflict between at least two different state parties.

President Trump and his own Department of Justice wouldn’t quite qualify. Law&Crime reached out to a representative for Sean Hannity for comment on this story but no response was forthcoming at the time of publication.