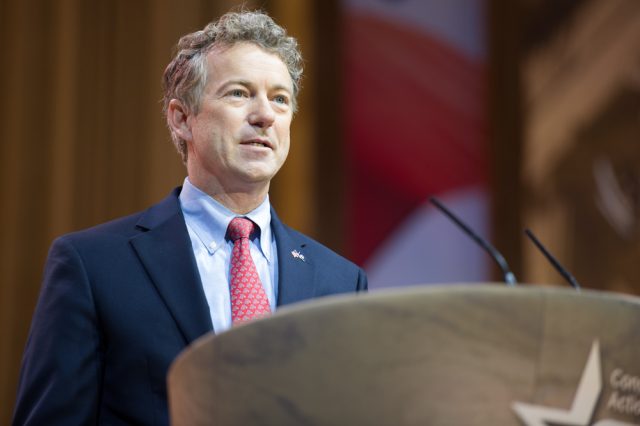 Senator Rand Paul (R-KY) has apparently decided to pursue a tort claim against his neighbor. Let’s take a look at the strength of his potential case.

On Monday, attorney Thomas N. Kerrick confirmed that Paul had retained his services, presumably in anticipation of a possible lawsuit against Rene Boucher, who allegedly broke six of Paul’s ribs after a violent altercation earlier this month.

Initial news reports attributed that incident to a longstanding dispute between the two neighbors involving “landscaping” issues, however, Paul has pushed back against that narrative. According to a statement released by Doug Stafford, one of Paul’s senior advisers:

This is a serious criminal matter involving serious injury, and is being handled by local and federal authorities. As to reports of a longstanding dispute with the attacker, the Pauls have had no conversations with him in many years. The first ‘conversation’ with the attacker came after Sen. Paul’s ribs were broken.

Boucher has so far been charged with assault in the fourth degree. In Kentucky, that charge carries a maximum sentence of one year in jail and a fine of up to $500.

If Paul decides to move forward with a civil action against Boucher, he’ll almost certainly sue for the tort of battery. Traditionally, the torts (and crimes) of assault and battery have been separated out as two distinct claims. In Tennessee’s case, the state’s criminal statutes fold them both together. For civil purposes, though, Paul will most likely only move forward with a battery claim against Boucher.

Under the common law, assault is defined as an intentional act, coupled with the apparent present ability that causes awareness and reasonable apprehension of an immediate harmful or offensive touch without consent. In other words, assault is the crime or tort of making someone reasonably fear that you’re about to hurt them.

Battery, on the other hand, is defined under the common law as the intent to cause a harmful or offensive touching that results in actual harm or offense. In other words, battery is the crime or tort of actually hurting someone or touching them offensively without their consent.

Here, Paul has said he was unaware of the attack before it happened. In a press release issued immediately after the incident, Paul’s office said, “[Paul] was blindsided and the victim of an assault. The assailant was arrested, and it is now a matter for the police. Senator Paul is fine.” The admission of being “blindsided” all but forecloses against suing for assault because being caught unawares precludes against any prior fear that you’re about to suffer harm.

Therefore, if Paul was truly “blindsided,” he didn’t have a chance to fear for his safety and an assault claim would be a waste of everyone’s time.

On the other hand, if Paul didn’t personally use the phrase “blindsided” and his office was just speaking colloquially to describe the unexpected nature of the attack in general, there might be a case for assault here. Essentially, if Paul was aware of the imminent violence–even for a brief moment–prior to its occurrence, then an assault claim against Boucher wouldn’t be too far beyond the realm of possibility.

Where things are a bit more cut and dry is the claim of battery.

Boucher admittedly tackled Paul during the incident in question—at least, according to a statement Boucher gave law enforcement officers. Without delving into the depths of evidential barriers in civil lawsuits, let’s assume Boucher’s admission is admissible–or that he at least stands by the account he allegedly gave to the Kentucky State Police.

Furthermore, let’s take Paul’s injuries into account. We can do this quickly: he’s got six broken ribs. That’s a medium-sized injury, for sure, but it’s definitely harmful. Fractured bones backed up by medical proof of such are certainly enough to satisfy the common law’s definition of harm here. Preemptively, pay no attention to the initial statement issued by Paul’s office stating that the senator from Kentucky “is fine.”

Again, that initial statement was not issued by Paul directly and any attempt to use it to mitigate the potential tort here would suffer from various contextual pitfalls. For example, Paul’s office would and could feasibly say that they meant Paul was fine under the circumstances. As anyone in a romantic relationship can attest, “fine” isn’t a word anyone should hang their hat on.

Thus, Paul should have a fairly slam-dunk case against Boucher for battery should he actually pursue it. And, if he does so, he wouldn’t have too difficult a time obtaining damages. Those would almost certainly include Paul’s medical bills and legal fees, at the very least. Punitive damages would be hard to qualify or quantify here, but Paul would likely move for them as well, and would likely receive them if he won the case.

Finally, in a more typical battery claim, the plaintiff–upon sufficiently proving the defendant’s liability–would likely claim damages for loss of wages due to medical injury, but since senators can miss as much work as possible and still get paid from the public purse, that’s may not be up for consideration.