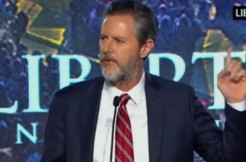 Starting in the fall 2016 semester, Liberty University will allow students with concealed-carry permits to bring their firearms into their dorm rooms. The board of trustees passed a resolution last week, which gave University President Jerry Falwell Jr. the power to make the rule-change, according to The News & Advance. Falwell, who announced it Tuesday, originally proposed it.

“It was because of what happened just an hour and a half up the road at Virginia Tech,” Falwell said at a Dec. 9 convocation. “More than 30 innocent students and facility were just murdered viciously and none of them had the ability to protect themselves. From the day that happened, I thought we needed to do something here at Liberty.”

On April 16, 2007, Virginia Teach student Seung-Hui Cho shot up the campus: He killed 32 people, wounded 17, then killed himself. Falwell had also encouraged students to arm themselves because of the San Bernardino mass shooting on Dec. 2.

Applicants must be age 21 or older to get a concealed-carry permit in Virginia, so Falwell suggested that few students would be affected, according The News & Advance. He said only 20 students had permits out of the over 200 who were eligible.

Students previously had to keep their firearms in the glove compartments of their vehicles.