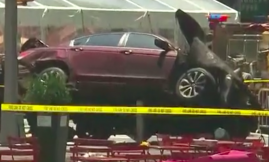 18 year-old Alyssa Elsman of Portage, Michigan was killed in New York City’s Times Square when a man driving a car sped into a crowd in May, injuring 22 others.  Now, Elsman’s family, along with the families of other victims, will sue the city, WNEM reports.

Elsman’s father, Tom, believes that New York City could have foreseen the potential for a similar incident and done more to protect innocent pedestrians.  “I don’t want another family to ever go through what my ex-wife, my son, daughter, my whole family and the other 22 families. It could’ve been stopped,” he told WNEM.  Alyssa would have turned 19 years old next week.

Twenty-six year-old Richard Rojas, the alleged driver in the incident, has been charged with one count of second-degree murder, 20 counts of attempted murder, and 5 counts of aggravated vehicular homicide.  Rojas tested positive for PCP following the incident and claimed that “God made him” act, according to law enforcement.  He also reportedly anticipated being shot by the police and suffered from “psychological issues”.