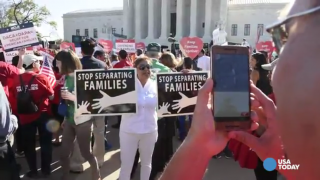 In a a 4 to 4 decision, the Supreme Court essentially upheld a lower court’s decision to block President Barack Obama’s controversial immigration plan.  The case, United Sates v. Texas, concerned an Obama administration plan called Deferred Action for Parents of Americans and Lawful Permanent Residents, or DAPA. The plan would have allowed as many as five million unauthorized immigrants who are the parents of citizens or lawful permanent residents to apply for work permits. Obama took the executive action in 2014 after continued in action by Congress. The decision is a major block to the administration.

According to The New York Times, a federal judge in Texas entered a preliminary injunction shutting down the program while the legal case proceeded. The United States Court of Appeals for the Fifth Circuit in New Orleans affirmed the injunction. Stay with LawNewz.com for more analysis on this case.