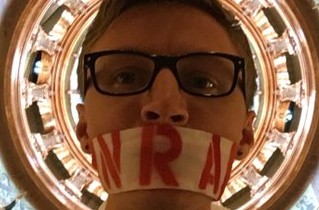 Protesters showed up Thursday to the Capitol building in Topeka, Kansas to protest a new law that would allow concealed-guns in state-funded colleges, but were kicked out by security.They are called the Kansas Coalition for a Gun Free Campus. The students showed up with mouth gags stating “NRA.”

“After our demonstration in the Rotunda, some of us went to sit in on the House session,” Protester Davis Hammet told The College Fix. “We stood in silence in the observation area with our mouth gags on and were asked to leave.”

Protest, Governor running out the backdoor, kicked out of #KSleg… Just another day #LoudLight #failcampuscarry pic.twitter.com/r0LgdMFd79

To be clear, there are no reports the protesters jumped a rail, or that they, you know, threw beer cans or something.

If you don’t live in Kansas, you might need a refresher. Public universities there will be mandated to allow concealed weapons on campuses beginning July 1, 2017. There’s a slight work around for institutions that want no part. They can pay extra fees for security if they don’t want students and teachers to be packing. So that’s the choice. Guards or hidden weapons.

The Kansas Legislature worked to peel back gun restrictions since 2012. First, the Personal and Family Protection Act allowed concealed-carry permit holders to bring their weapons into most government buildings, unless there is enough security to make sure no weapons are allowed at all. This basically means a facility needs to have a metal detector or the like. A 2015 measure eliminated permit requirements to carry a concealed-weapon.

The thinking is that if a bad guy starts opening fire, a good samaritan will pop a cap in them, putting an end to the carnage. That’s what political science Professor Bob Beatty of Washburn University told The Wichita Eagle in an October report.

“If somebody does start shooting the place up, hopefully someone will have a gun and shoot them,” he said. The professor cites Kansas’ heavily pro-gun culture, but it’s clear not everyone in the state agrees.

“I’ve been on TV the last two years saying guns have no place in schools, churches, or courthouses,” State Representative Jim Ward, D-Wichita, told The Eagle. “I don’t know how you could support that unless you’ve been living under a rock for the last five years.”