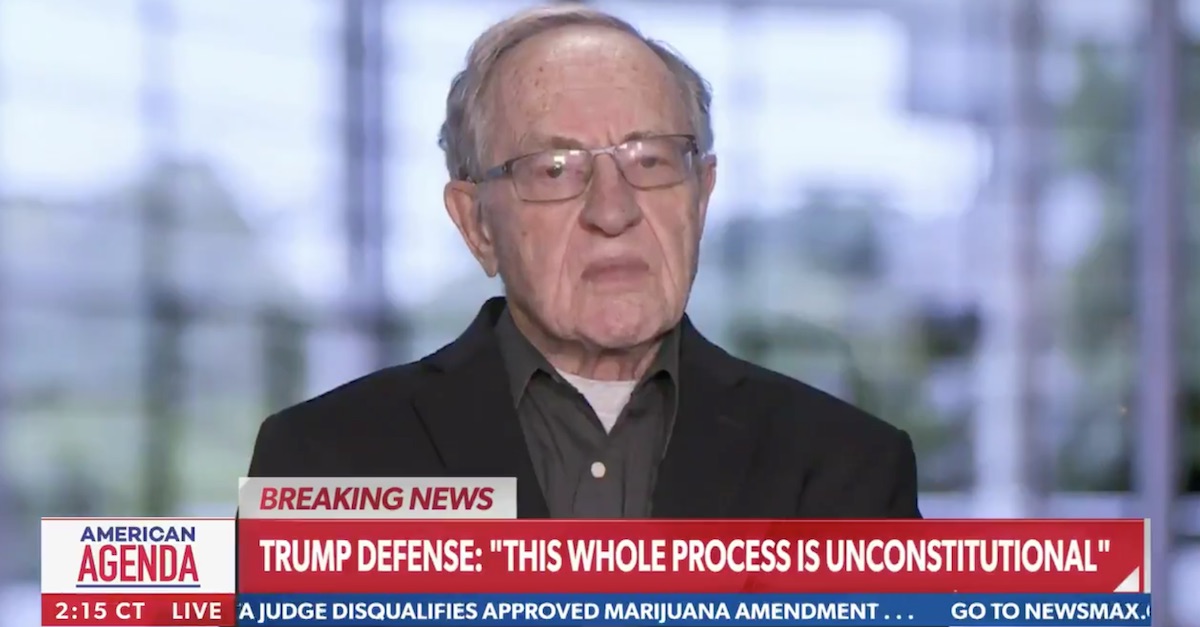 Harvard Law professor emeritus Alan Dershowitz joined a chorus of legal observers who criticized attorney Bruce Castor for his performance in defense of Donald Trump on day 1 of the impeachment trial in the Senate. Dershowitz said that he had “no idea” what Castor was doing and did not detect an argument, calling this problematic given the “very strong” opening by House impeachment managers.

Dershowitz, who memorably defended Trump during his first impeachment and who said he would defend Trump a second time if asked, joined Newsmax on Tuesday afternoon and offered his reaction to Castor’s strategy. Dershowitz visibly shook his head from side to side before he tore into Castor for not bringing a constitutional argument to the table to rebut the incitement of insurrection article of impeachment brought by the House.

'There is no argument – I have no idea what he is doing,' @AlanDersh on Trump's defense lawyer Bruce Castor 'talking nice' to U.S. Senators – via Newsmax TV's 'American Agenda.' https://t.co/VlT7z8drtO pic.twitter.com/7P7uVk5X19

“The American people are entitled to an argument—a constitutional argument,” he added. “This, just after all kinds of very strong presentations on the part of the House managers with the videotapes and the emotional speech by congressman Raskin, my former student.”

Dershowitz said that he did not understand Castor’s strategy and said buttering up the senators did not appear to be effective advocacy.

“Boy, it’s not the kind of argument I would have made, I can tell you that,” he said.

Dershowitz was far from the only legal mind to summarily pan Castor’s meandering appeal to the U.S. Senate on former President Trump’s behalf.

I don't see how he could have mooted (practiced) this argument in front of anybody, which is malpractice. no professional colleague could have listened to the whole presentation and not tried to get him to overhaul it.

It's like a Hitchcock movie where Cary Grant has wandered in to the Senate well to escape his pursuers and has to stall and hold them at bay by saying something, not knowing anything about the case…

For those wondering at home, he’s arguing that the article was drafted over broadly and requires that every allegation be proved to find guilt. It’s an argument that is often made in court but is a hard one for lay people to understand or care about.

Castor is the kind of lawyer who, five minutes into his opening statement, has the jurors looking at their watches and wondering when the judge will let them go to lunch. #impeachment

Castor is rambling already. I am paying attention (really I am!) but I have no idea where he’s going. Hearsay exceptions, now some Senator that Castor’s parents liked, also, remember record players?

In all my cases, I’ve noticed that folks who are confident in their legal argument dive right in. Others meander. This argument gives meandering a new meaning. He’s not even bothered to try to make his arg about former officers, respond to Judge McConnell, Chuck Cooper, etc.

Weird for Castor to make the case that his client should be arrested and indicted but… I agree?

FWIW: A Trump adviser tells me Castor is intentionally trying to reduce the emotion in the room after the House managers' case. Calls it a "deliberative strategy."