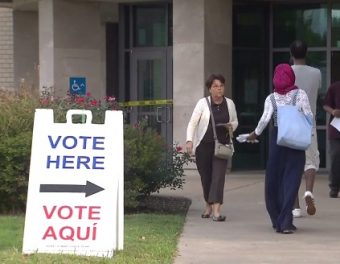 A post on Facebook from Arlington, Texas has caused quite a stir after claiming a woman tried to vote a straight Republican ticket, but the machine showed her voting for Hillary Clinton. The Facebook post has been shared nearly 200,000 times, and conspiracy theorists have flooded the internet with claims of a rigged election. It’s not the first time this sort of thing has been reported. Several people have made complaints that their all Republican tickets were changed to show Hillary in the final summary screen when they vote.

“I voted a straight Republican ticket and as I scrolled to submit my ballot I noticed that the Republican Straight ticket was highlighted, however, the clinton/kaine box was also highlighted! I tried to go back and change and could not get it to work. I asked for help from one of the workers and she couldn’t get it to go back either, ” wrote Lisa Houlette. However, election officials in Texas say this problem was likely due to  “voter error” — not any kind of rigging.

Tarrant County Republican Party Chair told a local CBS affiliate that the problem is voters are incorrectly turning the machine’s wheel to change the page, and in doing so, are changing their vote.

“Further, in each incident where we could actually speak to a voter, they tell us that they discovered the changed vote on the summary screen display. This shows that the machine is working exactly as it should. The voter gets to review a summary of vote changes made and make any changes as needed before actually casting the vote,” a Tarrant County Elections official told the news station.

“We’ve had multiple examples of that coming in. They voted for Secretary Clinton, it jumped to Trump, so we’re working with the elections office,”  Tarrant County Democratic party’s chair Deborah Peoples told the CBS affiliate. Election officials continue to insist that there is nothing wrong with the machines that the issue appears to be user error.