Barr: No Prosecutor Will Be Fired for Political Reasons | Law & Crime 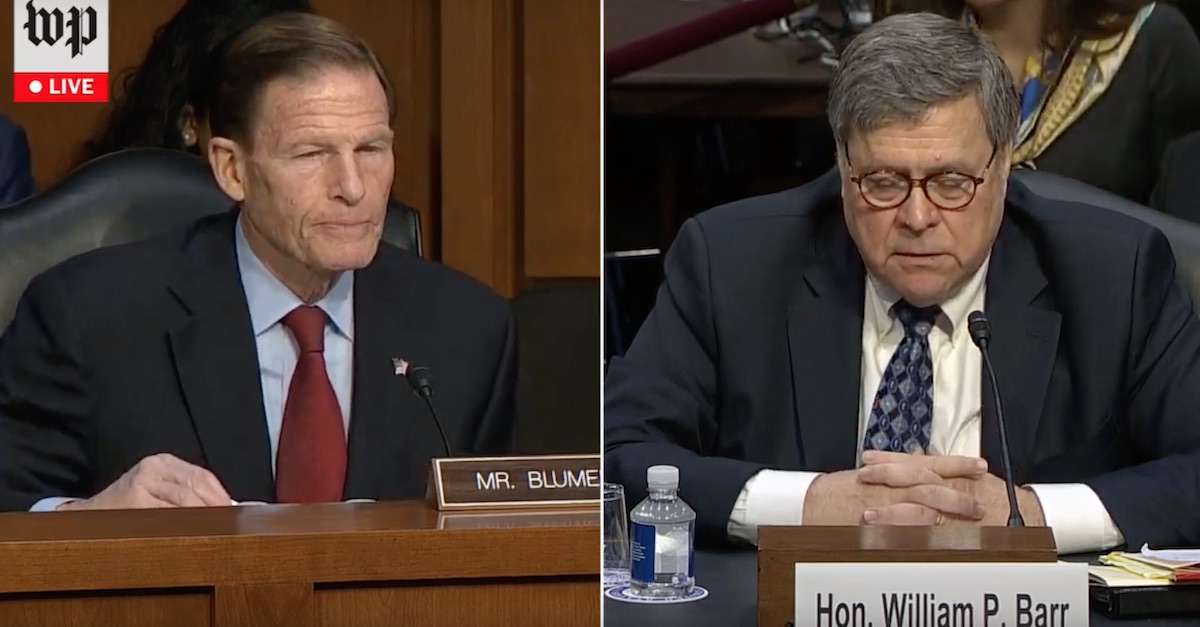 President Donald Trump‘s nominee for U.S. Attorney General William Barr made a few promises early on to Senate Judiciary Committee Chairman Lindsey Graham (R-S.C.). That did not change after everyone returned from lunch on Tuesday afternoon.

As part of the grilling by Sen. Richard Blumenthal (D-Conn.), Barr was asked if U.S. Attorneys can be fired by the president. We already know that the president can fire U.S. Attorneys, just as the president hires U.S. Attorneys. The reason that question is important now has to do with state prosecutors in New York actively looking into the Trump Organization and ex-Trump lawyer Michael Cohen‘s admission that Trump (“Individiual-1”) “directed” him to make hush payments for the purpose of influencing the 2016 election.

Blumenthal was apparently concerned that Trump would attempt to stop or stonewall investigations into him by shaking up the law offices of the Southern District of New York (SDNY), for instance.

“I would not allow a U.S. attorney to be fired for the purpose of stopping an investigation,” he said.

Other context related to SDNY: Geoffrey Berman, Trump’s appointee there, recused himself from the investigation at the start. Prosecutors there, led by Robert Khuzami, have instead headed up the case.

Earlier, Barr had promised to open investigations that may be seen as politically motivated. Graham asked Barr if he would “look into what happened in 2016,” referring to former FBI lawyer Lisa Page and fired FBI agent Peter Strzok‘s anti-Trump texts. Barr replied, “Yes, Mr. Chairman.” Barr was also asked if he would look into Fusion GPS, the Carter Page FISA warrant, and the use of the unverified Steele Dossier to surveil Page. Barr answered, “Yes, Mr. Chairman.”

Barr, who served as Attorney General during the administration of President George H.W. Bush, would replace former Attorney General Jeff Sessions and current acting AG Whitaker if he is confirmed. Barr has otherwise sought to ease concerns that he would hinder special counsel Robert Mueller’s investigation in any way, or prevent the findings of that investigation from coming to light.

Barr said that he believes it is “vitally important that the Special Counsel be allowed to complete his investigation.”

“I believe it is in the best interest of everyone – the President, Congress, and, most importantly, the American people – that this matter be resolved by allowing the Special Counsel to complete his work,” he said.