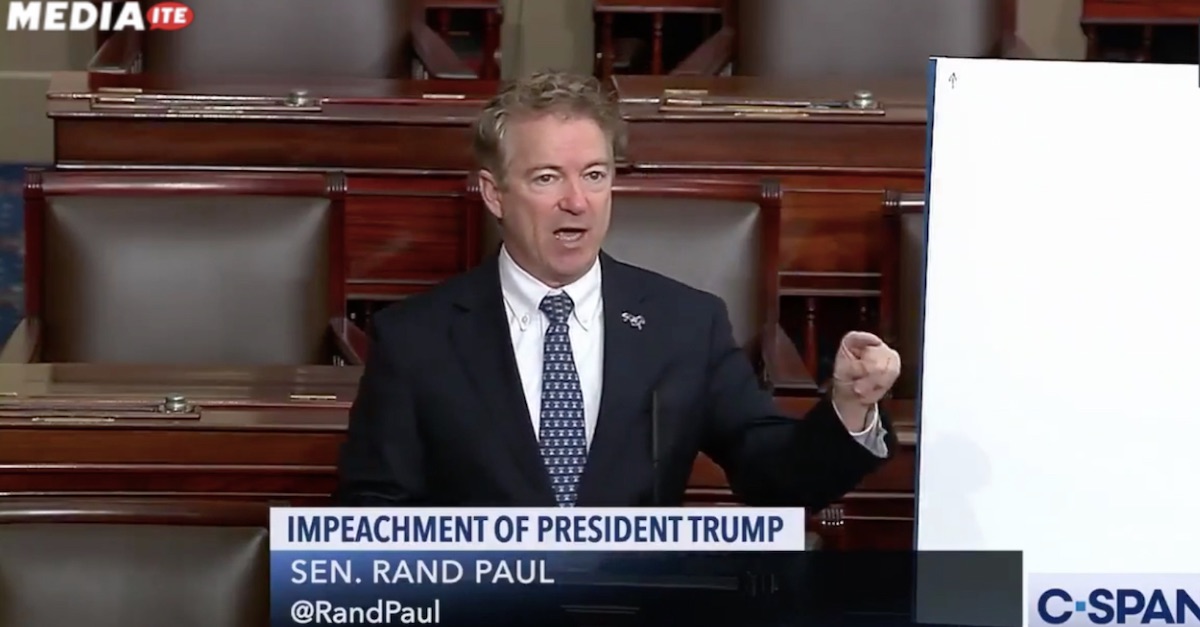 A whistleblower expert on Friday penned a letter to the Senate Select Committee on Ethics requesting the panel open an investigation into Senator Rand Paul (R-Ky.) for “illegally and dangerously” naming a government whistleblower during the impeachment trial of President Donald Trump.

“Senator Paul’s actions constituted a retaliatory outing of a government witness—which is criminal conduct,” Mueller wrote, citing to 18 U.S.C. § 1513(e), which criminalizes any retaliatory actions taken against any persons who come forward to provide truthful information regarding the possible commission of a federal offense.

“Whether or not the named individual was in fact the whistleblower, as Senator Paul claimed, is irrelevant to this concern. A senator charged with the safety and security of the nation should not be purposefully placing a citizen in harm’s way for no public purpose,” the letter said.

Mueller also refuted the notion that Paul’s comments were protected by the Speech and Debate Clause of the U.S. Constitution, specifically noting that Paul also said the alleged whistleblower’s name during an impromptu press conference and on Twitter.

“Court decisions have clarified that such protections extend only to legislative activity, as the purpose of the clause is to protect the free and full expression of congresspeople during such activity,” he wrote. “There is no way to construe Senator Paul’s public outing of the whistleblower as conducive to legislative debate. The naming of a private citizen, in public and not on the Senate floor, is not legislative activity.”

Imploring the committee to open an investigation, Mueller said that Paul’s actions not only flouted the design of the impeachment proceedings and demonstrated contempt for Roberts in his role as presiding officer, but also very likely “chilled” future whistleblowers from coming forward and reporting misdeeds in the executive branch.

“In the past, the Senate Select Committee on Ethics has admonished members who fail to meet the higher standards expected of a U.S. Senator,” Mueller wrote.  “Senator Paul’s conduct reflects poorly on the Senate. His behavior violates the bipartisan consensus that whistleblowers deserve protection, which is explicated in numerous laws and regulations including those that specifically prohibit outing a whistleblower as illegal retaliation.”

Lankford Letter Re Ethics Complaint by Law&Crime on Scribd