WH Spokesperson Backpedals on Whether Clinton is Target of Email Investigation 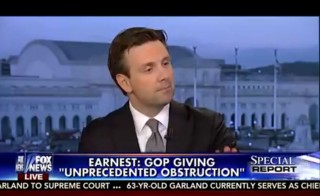 White House Press Secretary Josh Earnest appears to be backpedaling after he claimed that Hillary Clinton was not the target of the FBI email investigation into her private email server. A “target” is a term used by law enforcement about someone who will likely be charged, or is being investigated for criminal wrongdoing.

In late January, when asked if she could face charges, Earnest told reporters “That will be a decision that will be made by the Department of Justice. Some officials have said she is not the target of the investigation and it does not seem to be the direction in which it is trending.” He is now taking a more nuanced approach to that question, saying that he has no knowledge and was never  briefed about the details of the investigation. Bottom line, he has no idea whether or not she is a target.  Here is the exchange when Fox News’ Bret Baier asked Earnest about his statements Wednesday:

Baier: When you were first asked about the investigation, you said “what I know is that some officials over there at justice have said that she (Hillary Clinton) is not a target of the investigation? You are now saying that was not based upon anything that DOJ told you?
Earnest: What I’m saying is that was based clearly on what the Department had told a bunch of reporters. So my quote was there. When I said, we, I meant all the reporters in the room who were reporting on the case and who were quote department of justice officials were indicating that she’s not the target of the investigation. I didn’t say I had been briefed, and I have not been briefed.

Perhaps, the initial reporting was taken out of context — or maybe Earnest was just speaking aloud his wishful thinking about the course of the investigation. Either way, Wednesday, he made it clear he has no knowledge about whether Clinton is a target or not. The FBI is investigating whether any laws were broken when Clinton used a private unsecured email server while Secretary of State. Clinton maintains that this is a just a security review, and that none of the emails were classified when they were transmitted.

Here is the video from Earnest’s interview:
Please enable Javascript to watch this video