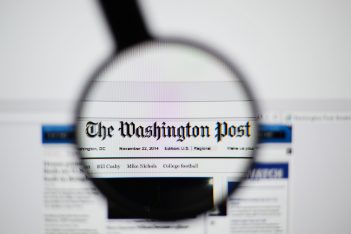 A report published in the Washington Post late last week made a shocking claim that a computer code the Obama administration had tied to a Russian backed computer hacking operation had been found inside the systems of a Vermont utility company. In essence, the Washington Post report claimed this was evidence that the Russians possibly penetrated the United States power grid. Subsequent reporting, however, shows that original WaPo report seems to be wrong.

This lead The Post to issue an editor’s note that said an “earlier version of [the] story incorrectly said that Russian hackers had penetrated the U.S. electric grid. Authorities say there is no indication of that so far.”

Now, nearly five days later, The Post has finally admitted that it made a major mistake in its original reporting:

The Post initially reported incorrectly that the country’s electric grid had been penetrated through a Vermont utility. After Burlington Electric released its statement saying that the potentially compromised laptop had not been connected to the grid, The Post immediately corrected its article and later added an editor’s note explaining the change.

As it turns out, federal officials are now telling The Post that the suspicious code found on the computer of a Vermont utility employee is likely “not linked to any Russian government effort to target or hack the utility. . . .”

Further, the latest report states further investigation appears to show the Vermont utility employee “was checking his Yahoo email account Friday and triggered an alert indicating that his computer had connected to a suspicious IP address associated by authorities with the Russian hacking operation that infiltrated the Democratic Party.”  That initial part of the investigation finding seems to have set off the firestorm over the weekend on social media.

However, it now appears that federal officials told the utility company “that traffic with this particular address is found elsewhere in the country” . . . which suggests “the company wasn’t being targeted by the Russians.” after all.  What’s more, investigators are saying the traffic could be” benign, since this particular IP address is not always connected to malicious activity.”

That is quite a different story from the one published last week that had prominent members of the D.C. -NYC media in frenzy, such as The New York Times Editorial writer Brent Staples who has now seemingly deleted a tweet that read:

Politicians  like Sen. Patrick Leahy are are also likely a little red in the face this morning after issuing a stern statement based on the original report that said, “State-sponsored Russian hacking is a serious threat, and the attempts to penetrate the electric grid through a Vermont utility are the latest example.”

However, the reporting had it critics, most prominently Glenn Greenwald who was one of the first to call out The Post’s reporting, writing on Saturday:

There was no “penetration of the U.S. electricity grid.” The truth was undramatic and banal. Burlington Electric, after receiving a Homeland Security notice sent to all U.S. utility companies about the malware code found in the DNC system, searched all their computers and found the code in a single laptop that was not connected to the electric grid.

Greenwald is now seemingly really enjoying himself this morning on Twitter, at the expense of The Post:

The day the Post retracts PUTIN HACKED THE ELECTRICITY GRID! seems like a bad time to mock those who want evidence for such official claims. https://t.co/XMPT1KKLXN

He is even seeming to suggest the original report is part of the “fake news” problem:

This has happened repeatedly this year, especially re Russia. Intent is different, but the effect of widely spreading false news is the same https://t.co/0h381ItBHa