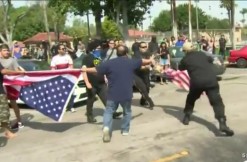 In a story right from 1955, KKK members and counter protesters brawled at a rally in Anaheim, California on Saturday. 3 people were stabbed, and 13 were arrested.

To be specific, the group in question calls themselves the Loyal White Knights of the Ku Klux Klan. They no longer run around with hoods like ghosts in a ‘50s B horror movie, now preferring sort-of casual black pants, and black shirts peppered with Confederate patches. Brian Levin, director of Cal State San Bernardino’s Center for the Study of Hate and Extremism, told the Los Angeles Times they model themselves after David Duke, former grand wizard of the Klan, former state representative in Louisiana, and would be president of the United States.

At Saturday’s rally, scheduled for 1:30 p.m. Pacific time, the Klan members were set to go off about illegal immigration, Levin said. In pictures of the incident, you can see them with signs with stuff like “White Lives Matter,” and “Say no to cultural genocide.” The group is well known for its white separatist philosophy.

But counter protesters beginning showing up at about 11 a.m. Their numbers grew to about 30, Wyatt told the Associated Press. Maybe Anaheim, with half its population being Hispanic according to the U.S. Census Bureau, wasn’t the best location for this.

Since this happened yesterday, the investigation is ongoing, and it’s not immediately clear who started what. What’s obvious is that six Klan members were arrested in connection to the stabbings, and seven counter protestors cuffed for physical assault, said Sgt. Daron Wyatt of the Anaheim Police Department to the LA Times.

Levin was there to interview William Quigg, a KKK leader, and Anaheim resident, when the fighting broke out. He told the LA Times that he shielded Quigg from the protesters.

“’How do you feel that a Jewish guy just saved your life?’” Levin said he asked Quigg. And in case you’ve never read a history book, the Klan has a long record of antisemitism in addition to their mainstay of anti-black racism.

Levin protected Quigg because he worried the Klan leader would be killed. “Look at the video,” he told CBS Los Angeles.

In the video below, you can also see one Klan member try to, I kid you not, stab counter protesters with a flag pole. How American of him.

“They [the Klansmen] started pulling out weapons,” Martin Buenorostro told the LA Times, whose friend was allegedly stabbed. “One of them had the flag, the American flag, with the pointed top and I think that’s what got my friend. “It’s a serious wound. It wasn’t like the blood was dripping out. It gushed out of him.”

Some Klan members scrambled to escape in a vehicle, Dion Garcia told The Telegraph, but it sped off too soon, leaving a few people behind.

“It was crazy,” Garcia said. “A lot of us were trying to break it up. This was not necessary. They should’ve just let the Klan protest. This is America. We have free speech.”

You might remember the landmark 1969 Supreme Count ruling on Brandenburg v. Ohio, where the judges said the Klan had the right to protest under the First Amendment. Speech can’t be legislated just for being inflammatory. Legislators can only pass laws on speech that promotes “imminent, lawless action.”

All stab victims were protesters, Wyatt said. He didn’t make it clear who started what. At least one of the alleged victims was stabbed with a knife, another with an unidentified weapon.

“Preventing violent confrontations is always our goal,” Police Chief Raul Quezada said in a statement. “Unfortunately the handful of individuals committed to criminal behavior this afternoon caused the violent episodes.”

Anaheim and the Klan go way back. Some Klansmen won elected office there in the 1920s. Also in the news, Duke recently declared support (but not outright endorsement) of Republican presidential candidate Donald Trump. Trump recently balked at disavowing that help, saying he didn’t know enough about Duke to have an opinion on him.