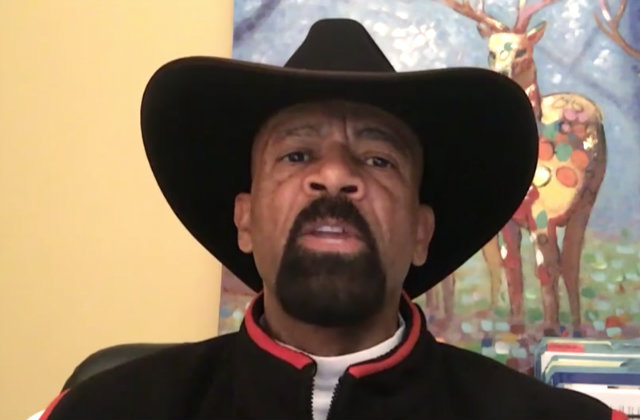 Twitter made former Milwaukee County Sheriff David Clarke take down anti-media tweets some time after he claimed that the company let him off for such posts. The platform put his account on read-only mode, temporarily stopping him from posting until he deleted three tweets that allegedly advocated violence against the media, CNN reported Tuesday.

It included a picture of Clarke’s and President Donald Trump‘s heads superimposed on wrestlers’ bodies. They are beating up another man meant to represent CNN. Clarke, a staunch Trump supporter, has followed Trump’s pattern of attacking negative press coverage as “fake news,” and went on a tweet storm this weekend after outlets, including Law&Crime, reported that the FBI once executed a search warrant on his email account in a criminal case against him. (Prosecutors ended the probe for lack of evidence, he told us on Friday.)

A Twitter user sent Law&Crime a letter from the company. Apparently, the person reported Clarke for violating the rules.

A company spokesperson confirmed to Law&Crime that yes, this message is real and the CNN report is accurate, but declined to discuss further, citing privacy and security concerns.

Clarke tweeted over the weekend that the platform let him off for the post about punching media in the nose. He defended it as a “metaphor.”

Winning against LYING LIB MEDIA and Whiney SNOWFLAKES again. Like @realDonaldTrump said, we’ll win so much we’ll get tired of winning. Not yet however. Diaper wearing lefty didn’t like my metaphor reference to punching LYING LIB MEDIA in the nose. Twitter said no violation. Duh. pic.twitter.com/0drtWIEmMc

Clarke did not immediately respond to the Law&Crime request for comment, and provide an explain as to why this message is down.