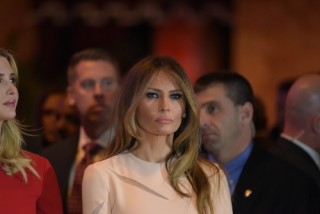 Plagiarism, while fun to analyze, is hardly the most important thing to analyze about Melania Trump. Not all things Melania are bad. On one hand, she’s a beautiful and poised woman, a devoted mother and a supportive wife. Plus, she’s had a successful career. On the other, she’s apparently a living immigration loophole. I don’t care that she reportedly did it. I do care, however, that it exemplifies everything that is wrong with Donald Trump’s immigration policies and, once again, exposes Trump’s hypocrisy.

Melania Trump came from Communist Yugoslavia to the United States reportedly on a H-1B Visa. From a recent New Yorker profile:

Melania came to New York to work as a model. Through a quirk in immigration law, models, nearly half of them without high-school diplomas, are admitted on H-1B visas, as highly skilled workers, along with scientists and computer programmers, who are required to show proof of a college degree.

The purpose of the H-1B program is to allow American employers to temporarily employ professionals in “specialty occupations.” Foreigners who are mathematicians, engineers, and scientists can work in the United States for up to six years under these visas. Oh, and so can fashion models. Under immigration law, those seeking an H-1B Visa need at least a bachelor’s in biotechnology, chemistry, architecture, engineering, mathematics, physical sciences, social sciences, medicine and health, education, law, accounting, business specialties, theology, or the arts– unless they’re models. In that case, they simply need to be “of distinguished merit and ability.” Melania followed our laws, got a green card, and eventually became an American Citizen; many would say she’s living the American Dream, and that her ascension to the role of potential-FLOTUS is inspiring. But Donald Trump, based on his own words, is not one of the many.

” The H-1B program is neither high-skilled nor immigration: these are temporary foreign workers, imported from abroad, for the explicit purpose of substituting for American workers at lower pay. I remain totally committed to eliminating rampant, widespread H-1B abuse and ending outrageous practices such as those that occurred at Disney in Florida when Americans were forced to train their foreign replacements. I will end forever the use of the H-1B as a cheap labor program, and institute an absolute requirement to hire American workers first for every visa and immigration program. No exceptions.”

According to Trump, the H-1B program is widely abused and serves as a basis for unskilled foreigners to take American jobs at low wages, effectively depriving hard-working citizens of their rightful employment.   That’s a problem, I guess, unless the foreigner is hot and is attracted to orange hair.  Weirder still is that Donald Trump apparently sees no irony in the juxtaposition of his anti-immigrant mantra, “we don’t know who these people are!” and his immigrant wife’s self-proclaimed, but untrue biographical details.

On Melania Trump’s own website homepage, she tells her story:

Yet, she did not obtain a degree from the University of Slovenia, or from any other university, according to multiple reports.  According to her biographers, she dropped out of college after her first year, became a model, and came to the U.S. as a “skilled worker.” In politics and public life, small details often get diluted in the shuffle of media appearances. Facts and sound bites get distorted, and accuracy becomes a relative term. But there are some things that really are binary. Either you graduated from college or you did not. And Melania Trump apparently did not.

I don’t raise this to vilify Melania Trump.  Apart from the apparent misjudgment Googling, “good first lady speeches” before the convention, and the apparently fake bio details, it doesn’t seem like she’s done anything too heinous.  I simply can’t reconcile how Donald Trump can read his wife’s story and conclude that she would make an excellent first lady, but simultaneously conclude that other immigrants are all dangerous criminals. More disturbing yet is the unified front Mr. and Mrs. Trump put forth – one grounded in façade.  Trump supporters will point to the Clintons as being similarly untruthful; and that may be the most concerning thing of all. We can do better, both in candidates and in logic. We can analyze the behavior of politicians and public figures with logic and discretion, and without that analysis resting entirely on blame-shifting. Donald Trump has been bragging about his Wharton degree to anyone who will listen. He has crowned himself a “political outsider” with a platinum-standard bullshit meter. If anyone should be calling out a would-be FLOTUS for lying about her college degree, it’s Donald Trump. That he hasn’t isn’t remotely surprising. That we never expected him to is the essence of the problem.