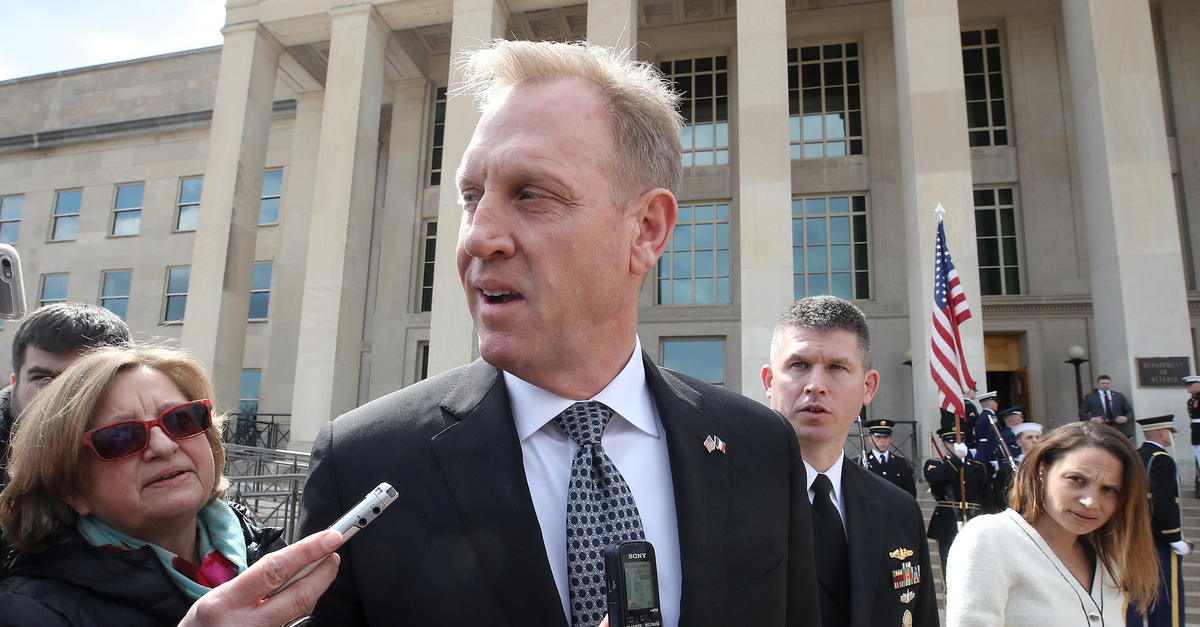 The Trump administration’s Acting Secretary of Defense Patrick M. Shanahan is currently under investigation by the Department of Defense Office of Inspector General over ties to his former employer.

According to HuffPost, the office confirmed the investigation on Wednesday after a series of ethics complaints suggested Shanahan “regularly touted Boeing over other defense contractors” while serving in his official capacity at the Pentagon.

Dwrena Allen is a spokeswoman for the inspector general’s office. In a statement, she said, “The Department of Defense Office of Inspector General has decided to investigate complaints we recently received that Acting Secretary Patrick Shanahan allegedly took actions to promote his former employer, Boeing, and disparage its competitors.”

Earlier this month, non-partisan political watchdog organization Citizens for Responsibility and Ethics in Washington filed a formal inspector general complaint for allegedly promoting “Boeing in discussions at the Pentagon about government contracts, saying that Boeing would have performed better than its competitor Lockheed Martin had it been awarded a DOD fighter jet contract.”

Prior to being tapped for the role by President Donald Trump, Shanahan served as an executive at Boeing for over three decades where he held multiple vice-president positions throughout his long career with the now-embattled aerospace company.

The Puget Sound Business Journal once described Shanahan as one of Boeing’s top-two “fix-it” men due to the breadth of his responsibilities over the years–which most recently included oversight of Boeing’s entire global supply chain, manufacturing operations and strategies as well as leading the company’s Environment, Health and Safety Organization.

Before serving in that multi-pronged position–which began in March 2016–Shanahan oversaw “all Boeing Commercial Aircraft production programs,” according to the outlet. Shanahan’s time in charge of the aerospace giant’s commercial aircraft division coincides with the development of the recently-grounded Boeing 737 MAX aircraft.

The Boeing executive in charge of that controversial program, however, was Shanahan associate and fellow “fix-it” man Scott Fancher. The Business Journal described Fancher as having been “responsible for design, development and certification of the Boeing 737 Max, 777X and 787-10 commercial airplanes.” Both executives moved up the corporate ladder at the same time.

Fancher retired from Boeing in the summer of 2017, almost exactly one month after the 737 MAX made its first commercial flight between Kuala Lumpur and Singapore as Malindo Air Flight OD803.

Shanahan himself has no actual military experience but his father apparently ingrained positive feelings toward the military into his son due to his own experience in the U.S. invasion of Vietnam. At an October 2017 Pentagon gala for the Ken Burns and Lynn Novick documentary “The Vietnam War,” Shanahan said those who participated in that invasion were people “of quiet courage and patriotism, men of grit and determination who rendered superior service in uniform and later as civilians in their communities.”

Despite his complete absence of military, foreign policy or governmental experience, Shanahan was chosen by President Trump reportedly due to his enthusiasm for negotiating defense contracts, according to the Washington Post.

In a December 2018 interview with Defense News, Shanahan said his job is to “operationalize [the National Defense Strategy while] driving systemic change – rewiring the organization to increase our performance on lethality, alliances, and reform.”

“Too often we focus on process, or budget, or level of effort,” Shanahan told the outlet. “The Pentagon should focus on outcomes and outputs — our performance. This focus on performance should drive us to field unmatched lethality, execute on our modernization plans and achieve this affordably.”

Shanahan’s use of corporate jargon and technocratic outlook underscores the uneasiness that progressive critics of the White House have with him serving at the helm of the nation’s military operations.

“He is, literally and figuratively, the embodiment of the military-industrial complex about which former President Dwight Eisenhower warned Americans at the close of his presidency in 1961,” noted a brief article in America’s oldest magazine The Nation just as Shanahan stepped into his acting role late last year.

Now, Shanahan’s inarguable coziness with industry has him in hot water with investigators at the same agency he oversees.