Trump and Cruz are Wrong, It’s Still Possible for John Kasich to Win 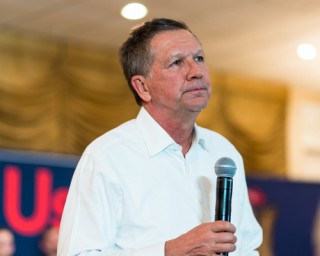 Some critics think that Governor John Kasich is just making a complete fool of himself by staying in the presidential race. In fact, The New York Times brutally dismissed his chances in Tuesday’s paper saying, “Gov. John Kasich of Ohio has performed so abysmally in the Republican presidential primary that his curious insistence on remaining in the the race has made him into a can’t-take-a-hint punch line.”

But, he’s sticking it out with no signs of calling it quits anytime soon.

“When the Super Bowl goes into overtime, does it matter what happened in the first quarter?” John Weaver, Kasich’s chief strategist told The Times.

Most political consultants worth their money would agree that Kasich’s chances of winning the necessary delegates in the upcoming primaries/caucuses to secure the nomination are very, very slim. Like pretty much impossible. But, here’s the thing, he’s not totally crazy to stay in the race either. Surprisingly, political strategists we spoke for this story haven’t ruled out a Kasich win either.

You have to remember one thing, the Republican nomination process is not a popular vote.   In fact, 19 states and territories use a caucus system. In those cases, a form of hand raising is done at local party meetings to choose delegates.  It all comes to a head at the Republican National Convention which also has its own set of rules that can be complicated and easily undone.

“I don’t think its totally crazy that he is staying in,” Adam Geller, Republican political consultant, and former Chris Christie lead pollster told LawNewz.com, “Some people have speculated that based on his travel patterns that he could be trying to siphon off some of Cruz’s votes.  It certainly could be a possibility that he is working a deal with Kasich.”

“He is getting voters to vote for him, he has the support of some party leaders — and he gives some voice to some more reasonable points of view coming out of the Republican party — there is no reason for him not to stay,” Democratic strategist Margie Omero told LawNewz.com.

With the 2016 Republican race, there is one thing we know — anything can happen between now and Cleveland. Most of all, anything can happen once the delegates arrive at the convention hall.  As the pundits try to analyze which rules apply to which candidate, they continue to forget the most important point: Before any vote for a candidate takes place, all of the delegates vote on the new rules for the 2016 Republican Convention.  Those rules can change everything. And maybe, just maybe Kasich could get a few changes that are favorable for him.

For example, the rules committee which meets before the Republican National Convention, could very well get rid of the infamous rule 40 (b) which says:

If the delegates agree to throw out that rule (which clearly favors Trump), Kasich would no longer need the majority of delegates in 8 states to have his name presented for the nomination. The committee could change it back to 3 or 5 states, which was the case for decades before the 2012 election.  Or they could even make the rule zero.  That would certainly get Kasich through one potential hurdle.

The fact that Kasich and Cruz are staying in the race means that the chances of one candidate (i.e. Trump) securing 1,237, delegates are getting less and less likely. So, yes, mathematically in the first round of balloting, there is no way Kasich would win because most of the delegates would be bound to vote for either Trump or Cruz.  But after the first round, if no one reaches 1237, many of the delegates are freed up to vote for who they want. One could imagine how the delegates, who are mostly made up of party leaders and political insiders, could be lured by the much more predictable John Kasich. (Especially now that Paul Ryan says ‘I do not want, nor will I accept, the nomination for our party.”)

“Many establishment Republican believe that Cruz or Trump would be detrimental to the party,” Omero said.

Lastly and here’s the interesting part: Pay very close attention to what happens to those Marco Rubio delegates now that he’s dropped out of the race. He has 172. That’s actually more than John Kasich has won (he only has 143 delegates).   Rubio is quietly working behind the scenes to defeat Trump. Rubio aide Alex Burgos recently MSNBC that Rubio “wants to give voters a chance to stop Trump.” Rubio has reportedly written letters to all 21 states where he won delegates stating that even though he is no longer in the race, he doesn’t want his delegates to be released. So what happens to his delegates? He probably wants to give them to either Cruz or Kasich. If Rubio gave them to Kasich, he’d already be at 315. That number doesn’t include how many Kasich might win in the upcoming primaries and how many delegates might vote for him, in the case, of a contested convention. The chances for Kasich are not all lost.

Boston University political science professor Tom Whalen pointed out to LawNewz.com that by keeping his name in the race, Kasich is also doing another thing. He’s keeping himself relevant.  Even though Kasich has claimed he is not interested, he becomes more and more viable as a vice presidential contender.

“Trump understands the art of the deal, and he also understand that he needs Ohio in the general election,” Whalen said.

So, while the pundits can continue to pontificate about Kasich’s chance of ever winning as zero, he’s not crazy to stay in the race. In fact, in every single poll that pits him against Hillary Clinton, Kasich wins.  Both Cruz and Trump have a lot to gain if he drops out.