Top Potentially Troublesome Moments For Kavanaugh During His FOX Interview 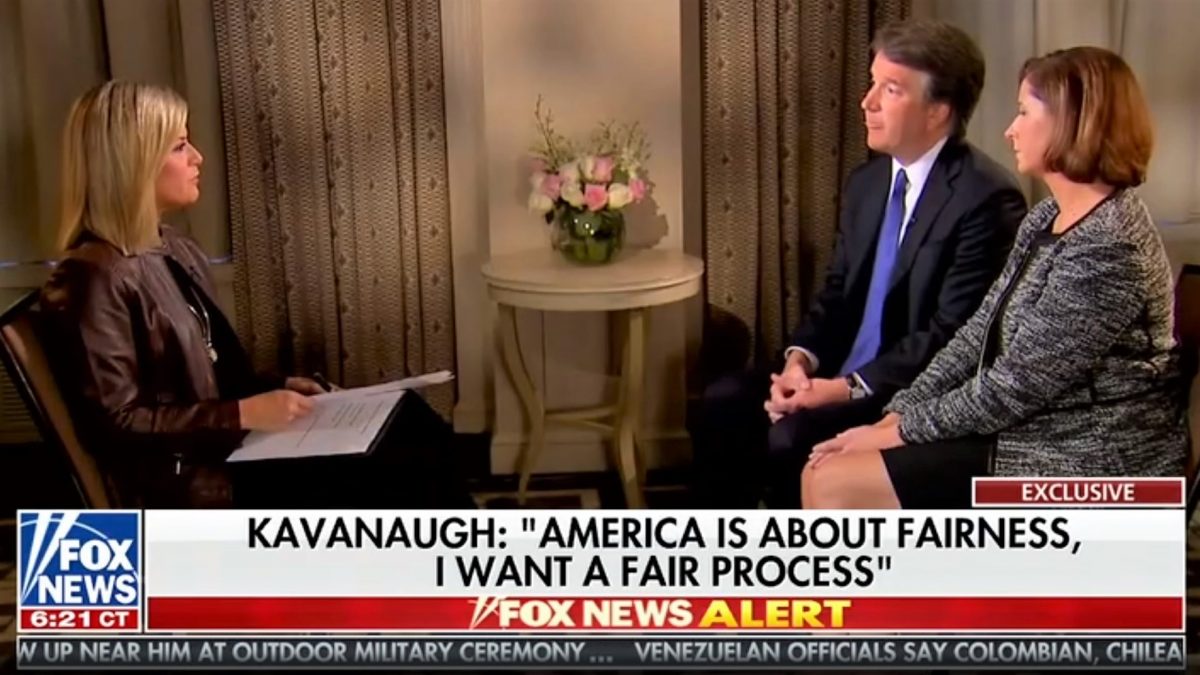 FOX News Channel’s unprecedented interview with Supreme Court Nominee Brett Kavanaugh is in the history books. Kavanaugh apparently felt the urge to sit down for a national television interview on sexual misconduct allegations which became public against him in the preceding days.

Though the interview was chock full of Kavanaugh’s blanket denials of any improprieties and demands by Kavanaugh for due process when it comes to the allegations against him, it did result in several comments which those opposed to Kavanaugh (read:  Democrats and liberals) are surely at this hour pouring over in extreme detail. A few of Kavanaugh’s denials and claims, which we will review here, could become problematic if his opponents have facts to the contrary. Again, we have no indication that they do — but through our legal lense– this is where we see his vulnerabilities.  Watch for these points as Senators begin their grilling on Thursday.

(1) He basically doesn’t know Christine Ford, one of his accusers.

Ford has been specific about what she claims Kavanaugh did to her, as interviewer Martha MacCallum pointed out:  “You, at a party in high school, pinned her to a bed, held your hand over her mouth. She said she was afraid that she could inadvertently be killed at that moment. She said that you tried to take off her clothes, and she believes that you would’ve raped her if Mark Judge hadn’t climbed on top and everyone tumbled to the floor. And then she had an opportunity to get away. Now, she doesn’t remember the date and she doesn’t remember the place.”

With regards to Ford, Kavanaugh said:  “I may have met her, we did not travel in the same social circle, she was not a friend, not someone I knew.”

(2) He was really clear about the party where he’s accused of behaving badly but says he wasn’t at “any such party.”

When asked if he remembered Ford being at parties where he was present, Kavanaugh replied, “I do not. And this is an allegation about a party in the summer of 1982 at a house near Connecticut Avenue and East West Highway with five people present.”

That’s rather specific. Yet Kavanaugh said, “I was never at any such party. The other people who are alleged to be present have said they do not remember any such party.” Kavanaugh went on:  “A woman who was present, another woman who was present who is Dr. Ford’s lifelong friend has said she doesn’t know me and never remembers being at a party with me at any time in her life.” Later, he said, “I was not at the party described.  I was not anywhere at any place resembling that in the summer of 1982.”

(3) He “never did any such thing” with Deborah Ramirez, either.

He said any allegations that he was sexually inappropriate towards Ramirez “would’ve been the talk of campus” if they were true.

(4) He corroborated that he was the roommate of a guy who recently threw him under the bus.

(5) He apparently knows nothing about gang rapes at parties he attended.

In response to an accusation by attorney Michael Avenatti that a gang rape happened at a party Kavanaugh attended, Kavanaugh said he neither participated in or was aware of any such thing:  “that’s totally false and outrageous,” he said. “I’ve never done any such thing, known about any such thing.”

(6) He never drank to the point where he blacked out or wouldn’t remember what went on.

Kavanaugh admitted doing at least something that maybe Jesus wouldn’t have done, but said it wasn’t that serious:

“The drinking age was 18, and yes, the seniors were legal and had beer” at a party or parties he attended, Kavanaugh said. “And yes, people might have had too many beers on occasion and people generally in high school – I think all of us have probably done things we look back on in high school and regret or cringe a bit, but that’s not what we’re talking about. We’re talking about an allegation of sexual assault. I’ve never sexually assaulted anyone. I did not have sexual intercourse or anything close to sexual intercourse in high school or for many years there after.”

Later, MacCallum asked whether there were times Kavanaugh “drank so much” that he “couldn’t remember what happened the night before.” Kavanaugh said that sort of thing “never happened.”

MACCALLUM:  “So you’re saying that through all these years that are in question, you were a virgin?”

MACCALLUM:  “Never had sexual intercourse with anyone in high school . . . ”

MACCALLUM:  ” . . . and through what years in college since we’re probing into your personally life here?”

(8) He has no clue what’s behind the accusations.

MacCallum asked him repeatedly what’s behind the accusations. She asked if it had to do with Roe v. Wade. She also asked more generally.

Kavanaugh kept deflecting. “I don’t know,” he said one time. Several other times, he deflected back to simply wanting a fair process to defend himself.

What’s curious here is that earlier today, Kavanaugh sent a letter to Chairman Chuck Grassley (R-Iowa) and Ranking Member Dianne Feinstein (D-Calif.) of the Senate Judiciary Committee. In that letter, he said the following: “The coordinated effort to destroy my good name will not drive me out.”

Kavanaugh refused to repeat or to elaborate his “coordinated effort” claim to FOX News.

[Image and quotes via FOX News Channel’s The Story with Martha MacCallum.]