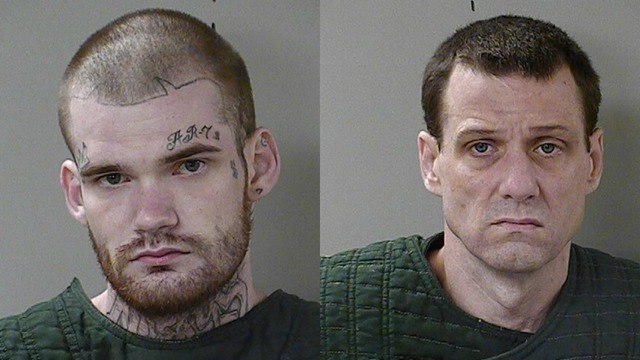 SHELBYVILLE, Tenn. (AP) — The man credited by law enforcement with holding two Georgia prison escapees at gunpoint until police arrived rejected the “hero” label the day after their capture and said credit should go to forces well beyond his control.

“I realized I had two ex-cons wanted for murder who had just shot at law enforcement who had nothing to lose and for some reason they surrendered and laid down on the concrete in my driveway,” Patrick Hale said Friday. “If that doesn’t make you believe in Jesus Christ, I don’t know what does.”

Hale said friends had just alerted him that the fugitives wanted in the slayings of two prison guards had been spotted in his area of rural Tennessee, so he quickly loaded his guns. Moments later, he saw them climb over his fence and approach his home, where he was alone with his little girl.

He decided to flee — getting into his car with his girl. Then, just as he prepared for the worst, the inmates took off their shirts and waved them in the air in a sign of surrender. He thinks they mistook his car for a law enforcement vehicle.

He said he never had to pull out his weapon — but the wait was agonizing. More than 45 police officers began showing up within three minutes, he said.

“I cannot tell you how grateful I was to see them arrive,” Hale said.

The manhunt for Donnie Rowe and Ricky Dubose suddenly focused on Tennessee Thursday evening after the fugitives invaded a home in Shelbyville and held a man and his wife hostage for several hours.

That couple “are lucky they’re alive,” Bedford County Sheriff Austin Swing said. The fugitives “told them that they would probably be dead in 24 hours and they didn’t have anything to lose.”

The fugitives tied them up, and when the man tried to break free, they tied him up tighter, putting socks on his hands so he couldn’t loosen his bonds, Swing said. They also ate a beef stew the woman had been preparing, took valuables and clothing, and ordered them to concoct a story that would conceal their identities.

“They threatened them that they would be back if they didn’t,” Swing said.

By about 5 p.m. they were on the run again, in the couple’s Jeep. Within 15 minutes, the couple managed to call for help.

“We’ve had an armed home invasion,” the man told a 911 dispatcher . “It’s the two people from Georgia, escapees. They’re in a black Jeep Cherokee Trailblazer. We need help out here quick … hurry!”

The chase ended with a crash near the community of Christiana, Tennessee. With deputies in hot pursuit, the suspects left the weapons they had stolen from their guards in the couple’s wrecked car, and ran through trees to Hale’s property.

Miller said the homeowner held them at gunpoint until deputies arrived. But Hale said he wanted to set the record straight: “I had a weapon on me, but I never had to draw the weapon as has been in the news.”

“True bravery is what’s caused us to stand before you tonight to talk about a successful capture instead of a tragic incident,” he said.

Hale took a picture of the escapees once they were surrounded by law enforcement officers. It shows them spread-eagled and shirtless, face-down on the concrete — the same postures he said they had assumed themselves without saying a word to him.

The fugitives were taken to the Rutherford County jail, and in a hearing on Friday, wearing orange jumpsuits and surrounded by officers, they waived their right to challenge their extraditions to Georgia.

“They will be brought to justice swiftly for their heinous crime against our officers,” Georgia Department of Corrections Commissioner Greg Dozier said in a news release.

Their escape began early Tuesday, when authorities said they somehow got through a door that should have been locked separating the guards from the inmates on the prison bus.

Sgt. Christopher Monica and Sgt. Curtis Billue were overpowered and shot to death with their own weapons. The fugitives then locked up 31 other inmates and jumped out with the guards’ 9 mm Glock pistols, carjacking a driver who happened to pull up behind them.

It was the first of four cars they stole on the run, authorities said. The fugitives ditched the Honda Civic and their prison uniforms, ransacked a home and then stole a Ford pickup truck in Madison, Georgia, later Tuesday. They left that truck in Tennessee and stole a white sedan, which they abandoned near the hostages’ home, Swing said.

The FBI announced a tip line and advertised a $130,000 reward on billboards. The Tennessee and Georgia bureaus of investigation weren’t immediately sure who would collect the reward.

Monica and Billue were transfer sergeants at Baldwin State Prison, where Rowe, 43, had been serving life without parole since 2002, and Dubose, 24, began a 20-year sentence in 2015, both for armed robbery and other felonies.