Sorry, Rose McGowan, No One’s Trying to ‘Silence You.’ 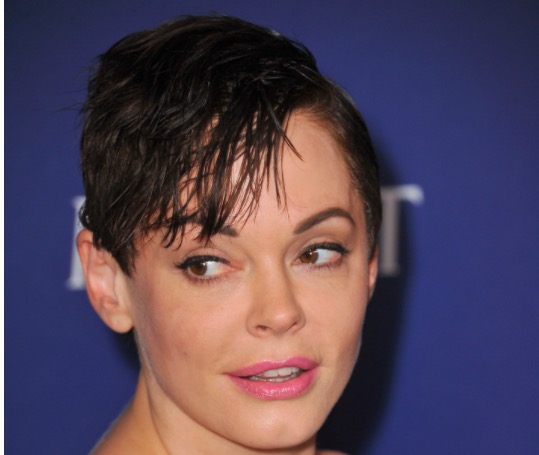 Dammit. We were just beginning to make some progress. The world was realizing that sexual assault is way more common than it had ever imagined, and that powerful men like Harvey Weinstein are enabled every day by those willing to overlook violence when it suits their professional ends. And then, in one tweet, Rose McGowan just threw a major wrench in the works.

Last month, a felony charge of drug possession from last February surfaced, and a warrant was issued for McGowan’s arrest in Virginia. She was arrested and is now set to appear in court for a drug charge on Thursday. The backstory on the drug charge is pretty simple. According to reports, McGowan had been traveling on a United flight arriving at Washington Dulles International Airport on Jan. 20. She left some personal items behind on the flight, and those items reportedly tested positive for narcotics. Cut to arrest warrant and charges of felony possession of a controlled substance.

McGowan has been at the forefront of the Harvey Weinstein sexual assault scandal. Her publicizing an incredibly harrowing story of victimization must have been deeply painful, but has effected meaningful consequences in the shape of empowering other victims to come forward. She’s also emerged as a take-no-shit heroine, speaking out about her refusal to take Weinstein’s hush money. That’s why her tweet yesterday was so disappointing.

Simply put, if you leave illegal drugs on an airplane, you cannot bitch about the consequences. It doesn’t matter whether you are a Hollywood actress or a stay-at-home mom. It doesn’t matter if you are a hardened criminal or a blameless rape victim. That’s just how the law works. Commit a crime, face consequences.   Rose McGowan knows that, and until yesterday, we thought she was advocating for that system.

Sure, it’s a little odd that the arrest warrant is surfacing several months after the incident in question. That anomaly sounds like something into which McGowan’s defense counsel should look. But she should really pipe down about how the criminal justice system is trying to “silence” her. Statements like that have an irresponsible message: we should excuse criminal behavior if we can find a way to blame the accuser.

Well I’m here to disagree. I’m unwilling to excuse McGowan’s alleged drug possession because she was an alleged rape victim in the same way that I’m unwilling to excuse Weinstein’s alleged sexual assault because he was a talented moviemaker. If McGowan wants to raise defensive arguments in court, great; but she’d better have some factual explanation for the drugs on the plane that amounts to more than, “they only care about my case because they’re trying to silence me.” Otherwise, when people come forward with claims of victimization at the hands of Harvey Weinsteins, Bill Cosbys, and Kevin Spaceys, the world will respond in kind. Conspiracy theories will be spun, victims will be blamed, and as a result, solid investigations and prosecutions will be thwarted.

The truth is that Rose McGowan’s drug case and her alleged sexual assault are entirely unrelated. A person need not be flawless in order to have been a real rape victim, worthy of our compassion and protection. Victims come in many forms, from the laudable to the detestable – and so do the guilty. One of the hardest truths to emerge from the recent onslaught of public sexual assault scandals is that not every villain seems villainous; some entertain us, some support our politics, and some are regular people who are pretty likable. Our task, difficult as it may be, is to stay focused on the facts and the law; when those are clear, there is no room for blaming the motives of those who call out criminal behavior, be they airport police or rape victims.

Author Bill Vaughan once said, “A real patriot is the fellow who gets a parking ticket and rejoices that the system works.” We desperately needed that kind of real patriot today, and instead, got Rose McGowan.

A version of this article first appeared on Law&Crime on October 31, 2017.