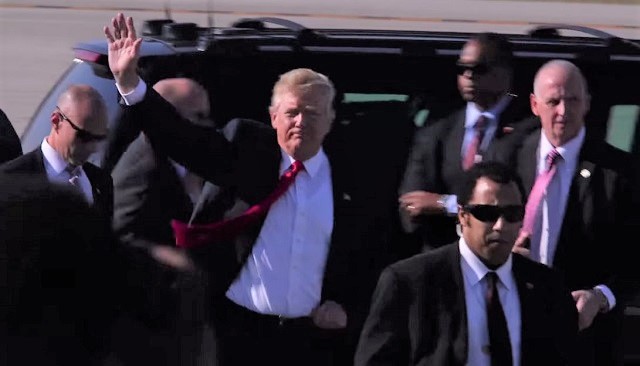 With the large number of people in President Donald Trump‘s family, combined with their frequent travel, the U.S. Secret Service has spent so much money in Trump’s first seven months in office that they have already hit their maximums for salaries and overtime for the year, according to a new report by USA Today.

This is in part due to the president’s extensive travel, as he has spent most weekends in Florida, New Jersey, or Virginia, and also in part a result of his large family with several adult children who themselves have been traveling all over for business. There are 42 people requiring Secret Service protection under President Trump, including 18 family members. President Barack Obama had 31.

Law currently keeps agents from earning more than $160,000 per year, so even if agents have earned more due to overtime work, they cannot be paid for it.

The president has a large family, and our responsibility is required in law,” Alles said. “I can’t change that. I have no flexibility.’

Alles said that he’s been in talks to get legislation passed to raise the maximum to $187,000 per year during Trump’s present term, but even he accomplishes this, it wouldn’t cover hours already worked.

Despite the unprecedented number of those requiring protection, this is not the first time the Secret Service has had salary issues, as just last year Congress had to approve a special payment to cover thousands of hours of unpaid overtime for more than 1,400 agents.

With the high work demand that has not always resulted in proportionate compensation, many agents have been leaving the Secret Service in recent years.

“We cannot expect the Secret Service to be able to recruit and keep the best of the best if they are not being paid for these increases (in overtime hours),” said Jennifer Werner, a spokesperson for Rep. Elijah Cummings, who is the ranking Democrat on the House Oversight and Government Reform Committee.

Taking care of these agents is a cause that has received bipartisan support.

Amanda Gonzalez, a spokesperson for Rep. Trey Gowdy, said the Republican congressman is “working with other committees of jurisdiction to explore ways in which we can best support [Secret Service agents].”

In the Senate, Homeland Security Committee ranking Democrat Claire McCaskill said, “Ensuring the men and women who put their lives on the line protecting the president, his family and others every day are getting paid fairly for their work is a priority.”