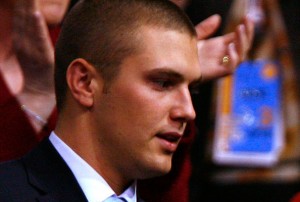 Just as Sarah Palin finds herself back in the spotlight, her son, Track Palin, finds himself in some legal trouble. He was arrested on Monday on domestic violence and weapons-related charges. According to a police report first obtained by the Associated Press, Wasilla police responded to a 911 call from a woman who said she had been punched by a man, who was also holding a gun. That call came from a home owned by Sarah and Todd Palin.

The officer wrote in the report that when he arrived, he found Track Palin walking around outside with visible injuries to his eye. He also said that the young Palin smelled like alcohol and was acting “uncooperative, belligerent and evasive.’  The officer, who found an unloaded AR-15 on the kitchen counter, arrested Palin at that time. The victim later told police that Palin struck her in the face.

She retrieved the phone and went inside the house. Palin was already inside and holding onto a gun, yelling “do you think I’m a pussy?” and “do you think I won’t do it?” [The victim] was concerned that he would shoot himself and ran outside and around the house.

Palin posted a $1,500 bail and is expected back in court on Feb. 19.  Police were also called to the Palin home in 2014, after a fight broke out but no charges were filed at that time, according to local reports.