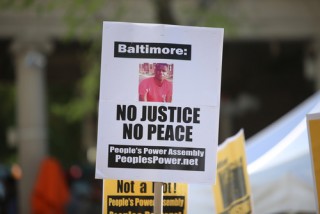 The CNN-Baltimore Sun special about Freddie Gray that first aired last night on CNN is a compelling documentary about the tragic events that led to Gray’s injury and death. Told primarily from that the perspective of Freddie Gray’s friends, witnesses to his arrest, and community activists, “Who Killed Freddie Gray” suggests that the police killed him. It ignores the defense argument that Gray’s death was a terrible accident. A more balanced title would have been a variation of the question posed in the middle of the documentary by Baltimore Sun reporter Justin George, describing the focus of the internal police investigation: “What, exactly, happened to Freddie Gray?”

Only at the very end of the hour do we learn that the six officers charged in Gray’s death and their attorneys did not participate in the broadcast. Baltimore Police Commissioner Kevin Davis is interviewed for the story, but his role is not to defend the police. His concern is healing the community, improving relations with the police, and implementing changes that ensure another similar Freddie Gray incident does not occur.

In fairness, in the first minutes of the hour, correspondent Miguel Marquez notes that some deem Gray’s death an accident, though many others call it murder. But there’s no further explanation of why anyone would call Gray’s death accidental even though that’s the main question for the jury: Was Gray’s death a homicide or was it an accident? Clearly, accidental death is a viable defense because the jury in Officer William Porter’s first trial late last year reportedly was close to acquitting him of manslaughter by a vote of 11 to 1.

Personally, I had hoped the documentary would include some discussion about the issues that those jurors grappled with—and that new juries will face during not only in Porter’s retrial but also the upcoming trials of the other five officers.

The questions I have in mind include: How common is it for officers to not restrain a handcuffed and shackled arrestee with a seatbelt? What do experts in police procedure conclude about the officers’ conduct with Gray? And perhaps most important, when did Gray’s catastrophic injury occur? Was it between the second and fourth stops, as the prosecution argued at Porter’s trial, or after the fifth stop, as Porter’s defense contends?

I understand that a large focus of this documentary is on recounting the events last April and examining both community and police relations in west Baltimore, and it does just that. But a few minutes should have been spent explaining the officers’ defense, or at least posing some of these very crucial questions—questions that are at the very heart of the criminal charges the community demanded.