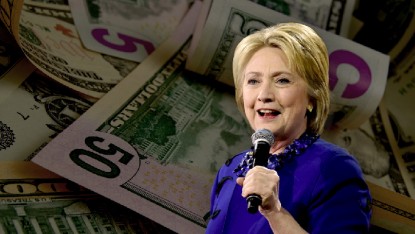 The conventional wisdom coming out of the most recent Democratic presidential primary contests is that Bernie Sanders is on his last leg.  Last week, it was widely reported that the campaign was cutting hundreds of staffers, and Sanders was said to be coming to grips with the reality that he can no longer realistically win enough delegates to win the nomination.  While all that may be true, it appears as though some in the Sanders’ campaign are not going down without a fight.  In a statement released on Monday, the Sanders’ campaign accused the Clinton campaign of “laundering” campaign donations.

The explosive allegation was made in response to a report on Monday about a fundraising venture called the Hillary Victory Fund.  Politico reports:

[T]he Hillary Victory Fund, is a so-called joint fundraising committee is [made up of] Clinton’s presidential campaign, the Democratic National Committee and 32 state party committees. The setup allows Clinton to solicit checks of $350,000 or more from her super-rich supporters….

According to CNN, the Sanders campaign also signed a joint fundraising agreement with the DNC. However, Clinton has been the only candidate to actually use it, raising upwards of $61 million through events like the well publicized $353,400 per plate dinner at actor George Clooney’s L.A. mansion.

Although the Hillary Victory Fund has raised a considerable amount of money, Politico reports their analysis shows the fund transferred $3.8 million to the state parties, but $3.3 million of those funds were almost immediately transferred to the DNC.  That leaves the state parties with less than 1% of all the money raised by this joint fund.  Further analysis by Politico shows that approximately $23.3 million “spent directly by the victory fund has gone toward expenses that appear to have directly benefited Clinton’s campaign, including $2.8 million for ’salary and overhead’ and $8.6 million” for web advertising that is essentially identical to official Clinton campaign ads.

“Secretary Clinton is looting funds meant for the state parties to skirt fundraising limits on her presidential campaign,” Weaver said in a statement on Monday. “We think the Clinton campaign should let the state parties keep their fair share of the cash.”

Weaver wasn’t holding anything back, even accusing Clinton of hypocrisy.

“Hillary Clinton says that campaign finance reform is one of the most important issues facing our country but her campaign’s use of the Victory Fund to essentially launder money proves otherwise,” he said.

Then came Weaver’s harshest allegation, “If Secretary Clinton can’t raise the funds needed to run in a competitive primary without resorting to laundering, how will she compete against Donald Trump in a general election?”

According to CNN, the Clinton campaign refuted some of the Politico report, saying transfers between the DNC and state parties “will coordinate with local, state and federal Democratic campaigns to work to elect progressives across the country in November.”

“Funds raised through the Hillary Victory Fund are now being used to fund and staff organizing programs in Ohio, Virginia, Florida and states across the country that will register voters, recruit volunteers and organize Democrats to turn out and support candidates up and down the ballot.”