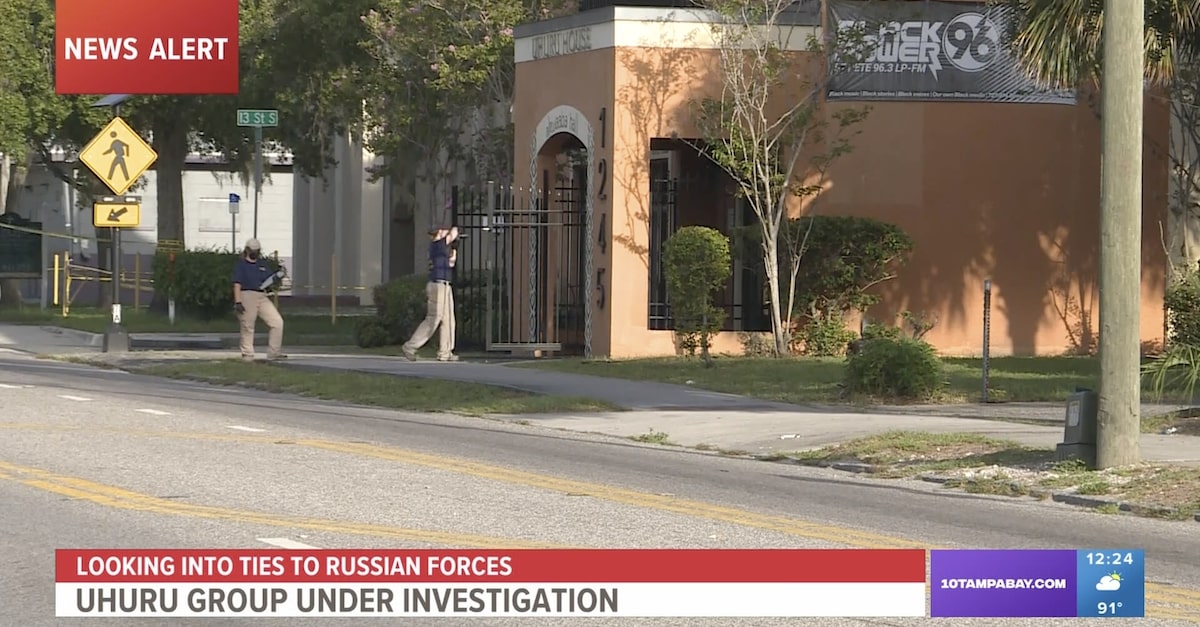 FBI raid the Uhuru House in St. Petersburg, Fla., as captured in this local broadcast.

A Russian man spent nearly a decade recruiting U.S. citizens and groups in Florida, Georgia and California to “sow discord” and push political “agitprop” against the United States and favoring the Kremlin, U.S. authorities said on Friday.

According to his 25-page indictment, Moscow resident Aleksandr Viktorovich Ionov founded the Kremlin-funded Anti-Globalization Movement of Russia and worked under the “supervision” and with the “support” of Russian intelligence agents as far back as October 2013.

Together, prosecutors say, they recruited political groups within the United States and Ukraine, Spain, the United Kingdom, and Ireland to attend conferences in Russia. Ionov is charged with conspiring to have U.S. citizens act as illegal agents of the Russian government.

The scope of the influence campaigns described in the indictment are startling in their aims and diversity, allegedly targeting U.S. elections, boosting a California secession movement, and recruiting groups on both poles of the political spectrum. Court papers also link Ionov to convicted Russian agent Maria Butina, whose ties to prominent Republicans came to light during investigations into the Kremlin’s interference in the 2016 U.S. presidential election.

Ionov allegedly worked behind the scenes to circulate a Change.org petition to charge the United States with genocide against African peoples, a campaign that gathered more than 113,000 signatures by press time.

Posted by the St. Petersburg, Fla.-based group International People’s Democratic Uhuru Movement — a pan-African and socialist group — the petition allegedly began with an overture from Ionov to two unindicted co-conspirators.

On Aug. 13, 2015, Ionov emailed the alleged co-conspirators, who have not yet been identified, asking them to create the petition “ASAP” and sent it to the “UN office in New York and to the websites of the White House and change.org.”

Some 13 days later, prosecutors say, the petition came into being. Ionov allegedly sent an email to one of his unindicted co-conspirators shortly after stating that the petition had been translated into Russian and disseminate through that country’s outlets.

“What we know this to really be, one, is a propaganda war is being waged against Russia every single day throughout the news,” Anai told the station.

Prosecutors also saw Ionov’s machinations behind the California secession movement, which went viral that year under the hashtag #Calexit.

In April 2017, CNN reported that the movement’s leader ditched the campaign to make his home in Russia shortly after former President Donald Trump’s election.

Ionov allegedly kept pushing the effort into the following year, emailing another unindicted co-conspirator in Russian to plan a demonstration outside the California Capitol in Sacramento that was ultimately held on Valentine’s Day of 2018.

Prosecutors say that emails show Ionov saying that he transferred $500 in support of the protest and paid for the posters.

After the demonstration, prosecutors say, Ionov passed on news articles to a Russian intelligence agent stating that he asked for “turmoil” and “there you go.”

The high-profile prosecution of Butina at the height of a Russia probe — though conducted by a different office — raised the spotlight on Ionov’s activities in early 2019, and a Russian intelligence officer allegedly warned Ionov about the possibility he would face sanctions.

Passing on an article printed on Aug. 20, 2019, the FSB officer told Ionov that the report identified him as a “patron of Butina, who admitted to interfering in the 2016 elections,” and warned that “sanctions would be imposed against him,” according to the indictment.

Federal prosecutors also accuse Ionov of machinations in a pair of local elections in St. Petersburg, Fla., in 2017 and 2019. Ionov continued to push the Kremlin’s line through his Florida contacts in the early stages of Russia’s war on Ukraine, falsely claiming “anybody who supported Ukraine was also supporting Naziism [sic] and white supremacy,” according to the indictment.

The full indictment appears below: